Any expert (adviser) is a tool for working in the market, and not an artificial intelligence that completely replaces the trader, and even more so not the Grail that solves all your financial issues. The adviser should show a constant profit and not allow a drawdown above 30%. This is the work that is provided by the BuySellProf lighter,  BuySellProf Gnome,    BuySellProf adviser,BuySellProf Risk Manager , BuySellProf Risk Manager lighter when properly configured. I will devote a separate article to setting up and testing it ( watch here).

‌Expert BuySellProf, BuySellProf Risk Manager and its light version - BuySellProf Gnome, Free BuySellProf is fairly simple to manage, but, like any tool, it has its own properties and features. Today I want to talk about 3 options for its work.

‌In the input parameters of the Expert Advisor, an SL- stop loss is set, which is several times higher than TP - take profit. SL - stop loss should be of such size that the adviser closes orders only on take profit, that is, wherever the price goes, to Buy or Sell, it will be in a closed space between the two take profit. On the one hand, TP - take profit orders balancer, on the other - combined (averaged by a special algorithm) take profit of previous orders. Thanks to this, the adviser closes only profitable trades.

‌For example, the value of SL - stop loss is 5000 pips, and TP - take profit 1000. In this case, the adviser will work constantly, both in mono and multicurrency, closing sooner or later the combined orders or orders of the balance. When you reach the profit necessary for you (View by Equity), you turn off the Expert Advisor in the terminal and manually close all remaining orders or reduce the SL-stop loss and go to the second option.

‌In the input parameters of the Expert Advisor, an SL-stop loss is established, which is smaller in size than TP-take profit. Therefore, it is between two take profit: on the one hand, TP - take profit of the balance, and on the other - a combined (averaged by a special algorithm) take profit of previous orders. When the price reaches SL - stop loss, the expert closes the balance order. If suddenly the price turns around, the adviser will open a new balance order at the opening price of the previous closed balance beam order.

‌This is the same second option, but instead of SL - stop loss, Use Trailing Stop is turned on. Trailing Stop makes trading more sensitive to market reversals. But the close location of the Trailing Stop to the price (too small, for example, 50 to 200 pips, with 5 decimal places) can lead to frequent opening and closing of orders (see the picture in crimson ovals, small losses are indicated for small SL - stop loss), as the price often fluctuates between 50 and 200 pips before going up or Down, especially with a lateral trend (flat). Such a frequency of order changes can lead to some loss of profit, therefore it is necessary to include Use Trailing Stop only when you expect the market to turn based on your trading strategy. 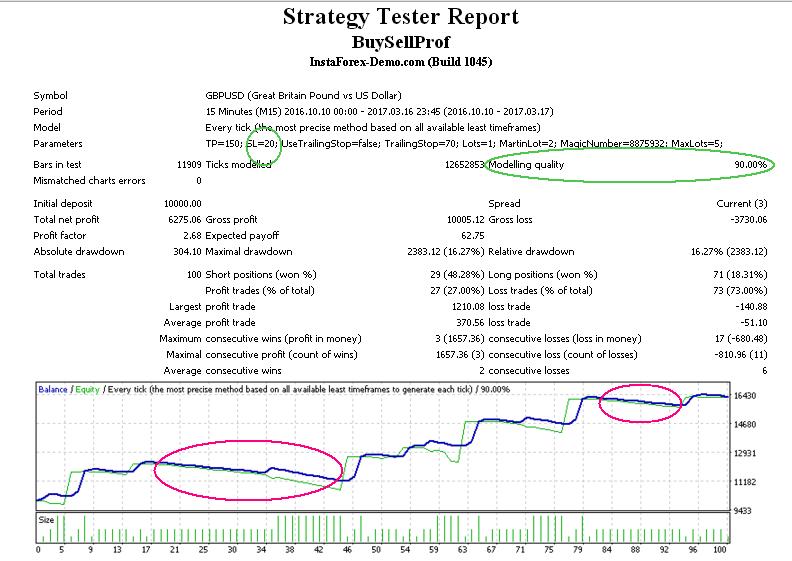 ‌For other opportunities in the work of the adviser, read here, and read here

HOW CAN I GUESS 100% THE DIRECTION OF PRICE MOVEMENT?

ON FOREX IT IS NOT SO DIFFICULT TO WIN, HOW HARD IT IS NOT TO LOSE!

Beginning trader can become the supplier of signals