What is most interesting pair for the next week for my next weekly technical analysis thread?

This is updated statement (I traded GBPUSD) :

September jobs are a disappointment at 148K vs expectations of 180K and private jobs only 126K well below the 180K expected, but August was revised higher this time, from 169K to 193K. Net for the two months, largely a wash.

The unemployment rate, at 7.2 percent, changed little in September but has declined by 0.4 percentage point since June. The number of unemployed persons, at 11.3 million, was also little changed over the month; however, unemployment has decreased by 522,000 since June.

The number of persons employed part time for economic reasons (sometimes referred to as involuntary part-time workers) was unchanged at 7.9 million in September. These individuals were working part time because their hours had been cut back or because they were unable to find a full-time job.

Total nonfarm payroll employment increased by 148,000 in September, with gains in construction, wholesale trade, and transportation and warehousing. *Over the prior 12 months, employment growth averaged 185,000 per month.

AUDUSD M5 with 45 pips in profit (by equity) for NFP

1. Open pending orders. I opened 2 pending orders: buy stop and sell stop. I did it using mouse on MT5 chart (right mouse click on the chart - Trading - Sell Stop or Buy Stop). The pending orders should be opened only if support/resistance lines (read/blue dotted lines on your/my chart) came in very close way to each other (and very close to the price).

3. Move stop loss. We are monitoring our trades and moving stop loss by mous on the chart (move stop loss line by mouse). Stop loss is moved to be near support/resistance level.

Example with EURUSD (I did moved so we can see it on the chart) :

Consumer prices in Australia climbed 1.2 percent in the third quarter of 2013 compared to the previous three months, the Australian Bureau of Statistics said on Wednesday.

That was higher than forecasts for an increase of 0.8 percent following the 0.4 percent gain in the second quarter.

The most significant offsetting price fall this quarter was for vegetables (down 4.5 percent).

On a yearly basis, consumer prices were up 2.2 percent - also exceeding expectations for 1.8 percent after gaining 2.4 percent in the previous three months.

The Reserve Bank of Australia's trimmed mean was up 0.7 percent on quarter - topping forecasts for 0.6 percent, which would have been unchanged from the previous quarter following a revision from 0.5 percent.

On year, the trimmed mean was up 2.3 percent - beating expectations for 2.1 percent and unchanged from Q2 following an upward revision from 2.2 percent.

With the value of imports and exports showing little change in the month of August, the Commerce Department released a report on Thursday showing that the U.S. trade deficit for the month widened only slightly.

The report said the trade deficit ticked up to $38.8 billion in August from a revised $38.6 billion in July. Economists had expected the deficit to widen to $40.0 billion from the $39.1 billion originally reported for the previous month.

The Commerce Department said the value of imports was virtually unchanged at $228.0 billion, while the value of exports edged down to $189.2 billion from $189.3 billion.

US: Markit Manufacturing PMI fell to 51.1 in October 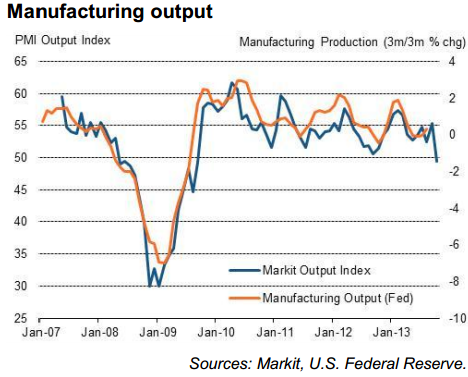 The advanced gauge of the manufacturing PMI sponsored by Markit dropped to 51.1 for the month of October, missing the median at 52.5 and down from September’s 52.8 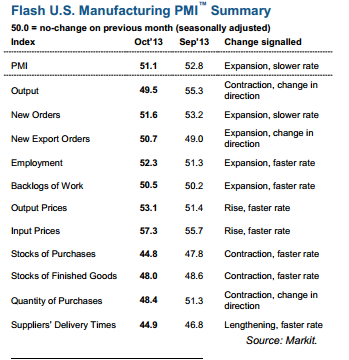 With the government shutdown weighing on expectations, the Conference Board released a report on Tuesday showing a substantial deterioration in U.S. consumer confidence in the month of October.

The Conference Board said its consumer confidence index tumbled to 71.2 in October from an upwardly revised 80.2 in September. Economists had been expecting the index to fall to 75.0 from the 79.7 originally reported for the previous month.

With the much steeper than expected monthly decrease, the consumer confidence index fell to its lowest level since April.

"Similar declines in confidence were experienced during the payroll tax hike earlier this year, the fiscal cliff discussions in late 2012, and the government shutdown in 1995/1996," she added. "However, given the temporary nature of the current resolution, confidence is likely to remain volatile for the next several months."

if actual < forecast = good for currency (for EUR in our case)

German unemployment rose for a third month in October, adding to signs of a slowdown in Europe’s largest economy.

The number of people out of work climbed a seasonally-adjusted 2,000 to 2.97 million, after gaining by a revised 24,000 in September, the Nuremberg-based Federal Labor Agency said today. Economists predicted no change, according to the median of 36 estimates in a Bloomberg News survey. The adjusted jobless rate was unchanged at 6.9 percent.

The German economy, which helped to pull the 17-nation euro area out of recession in three months through June, probably expanded at a slower pace in the third quarter, the Bundesbank said on Oct. 21. Sentiment among companies on the economic outlook dipped for the first time in six months in October amid uncertainty over the pace of the recovery in the currency bloc, Germany’s biggest trading partner.

“Survey indicators are weakening a bit and the big concern that we have is that even German companies are not investing that much,” said Anatoli Annenkov, senior economist at Societe Generale SA in London. “If we have continued growth in the third and fourth quarter, we can start to look forward to continued improvement in the labor market.”