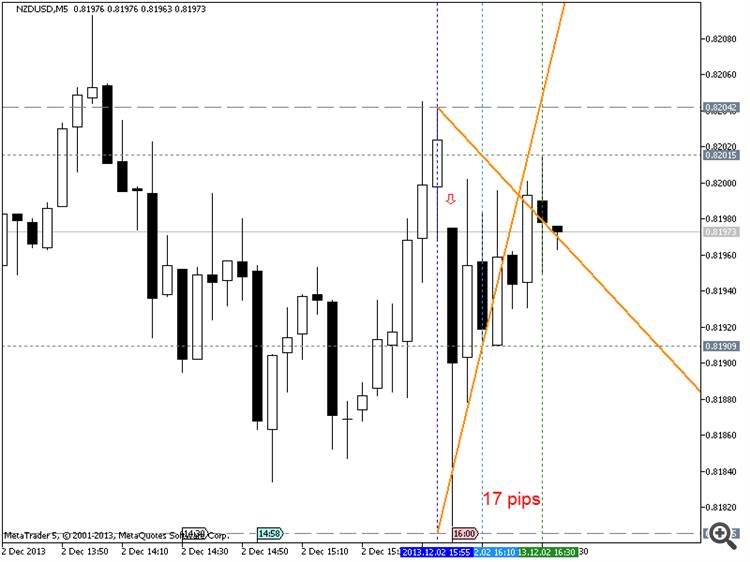 A country’s economy is as strong as its supply chain. The Institute for Supply Management (ISM) measures the economic activity from both the manufacturing side as well as the service side. Formed in 1915, ISM is the first management institute in the world with over 40,000 members in 90 countries. Since it can draw from information gathered from the surveying its large membership of purchasing managers, the ISM economic news releases are carefully watched by Forex traders around the world as a reliable guide to economic activity. 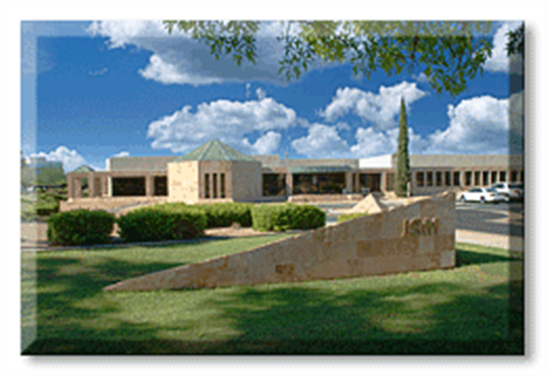 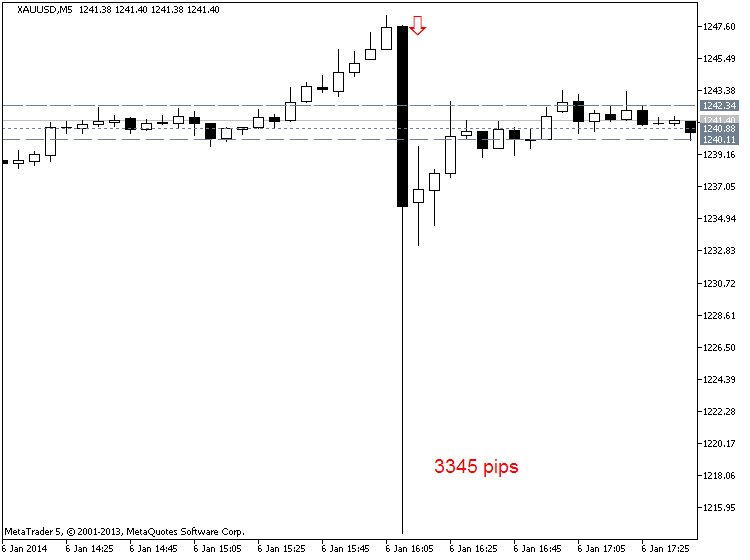 In addition, ISM construction PMI is released on the second business day of the month, followed by services on the third business day. Forex traders will look to these releases to determine the risks at any given time in the market. 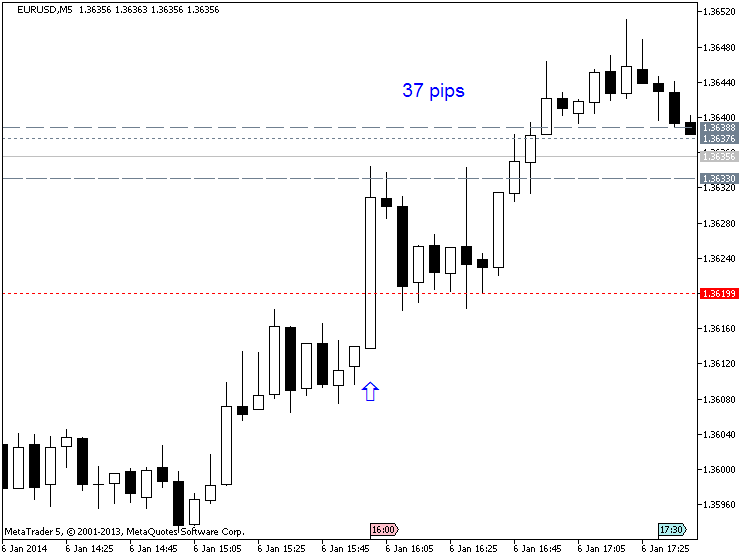 The Manufacturing and Non-manufacturing PMI’s are big market movers. When these reports come out at 10:30 AM ET, currencies can become very volatile. Since these economic releases are based on the previous month’s historical data gathered directly from industry professionals, Forex traders can determine if the US economy is expanding or contracting. 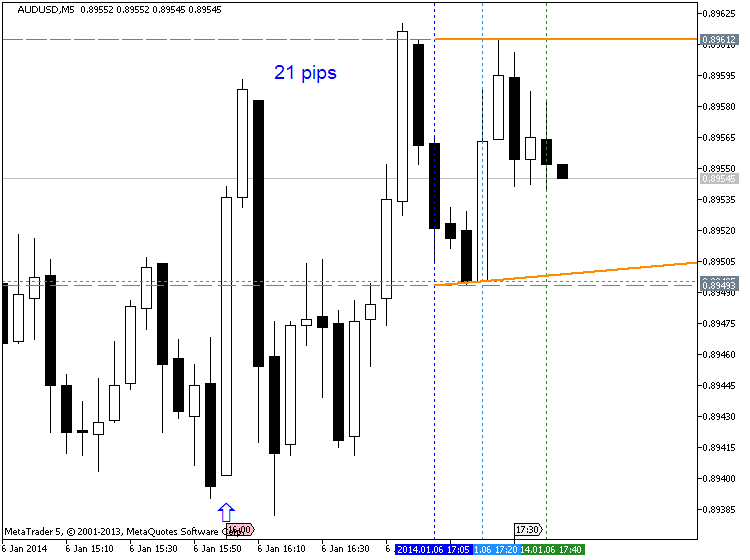 In the example above, notice how the better than expected PMI number triggered a US dollar rally against the Euro. As seen in the chart above of the EURUSD, the ISM Non-Manufacturing was not only above 50 but at 55.4, beat the forecasts calling for a drop from 54.4 to 54.0.

When an economic release beats expectations, like in the example above, sharp fast moves can result. In this case, EURUSD dropped 22 pips in 15 minutes. Traders often choose the Euro as the “anti-dollar” to take advantage of capital flows between two of the largest economies.

The Euro zone has a large liquid capital markets which can absorb the huge waves of capital seeking refuge from the U.S. So a weak US ISM Non-Manufacturing number usually leads to a dollar sell-off and a rise in the Euro. Another scenario is when the number released is in line with forecasts and/or unchanged from the previous month, then the US dollar may not react at all to the number. 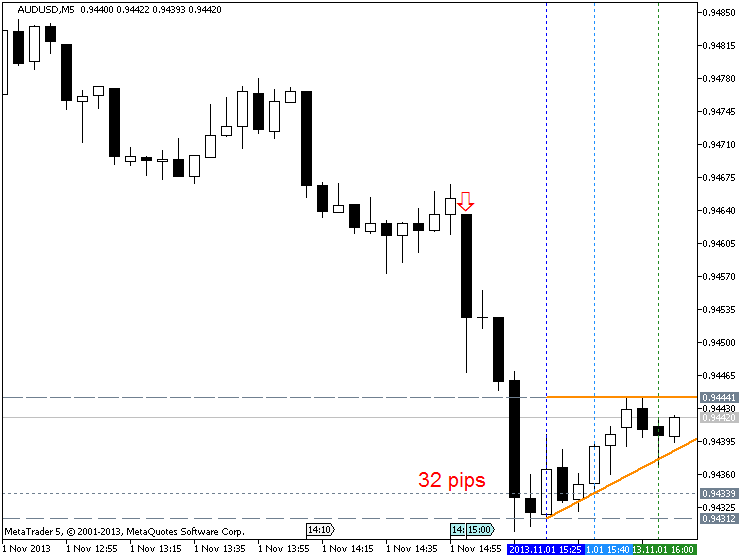 PMI’s are also compiled for Euro zone countries by the Markit Group while US regional and national PMIs are compiled by ISM. As you can see, traders have good reason to pay special attention to the important releases from the Institute of Supply Management.

How to Start with MT5, a summary !

How to start with MT5 platform : summary.

As our topic about "How to start with Metatrader 5" is going to be huge, here you find a summary, with main links.

Can I Trade from How to Start with Forex calendar, how does

Societe Generale: Greece is not the biggest EUR/USD driver (based on efxnews article)

"You could be forgiven for thinking that the biggest driver of the EUR/USD rate is not Greek debt talks, but the pricing of the December 2016 Fed Funds futures contract. This closed on Friday at 1.02%, the lowest level since mid-May." 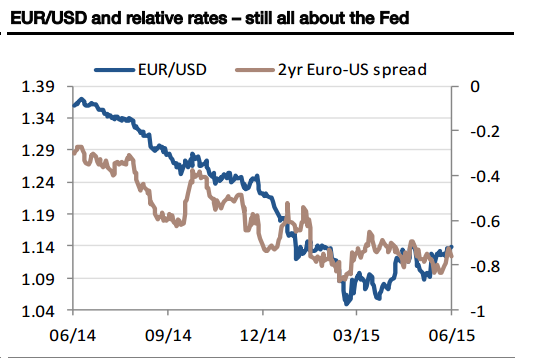 "Neither is high profile enough to change market thinking about Fed policy, which prices a 1% rise in rates over 18 months. All of which just suggests we will get a stronger dollar once a faster pace of fed rate hikes is priced in, but this needs a catalyst that today’s data won’t provide. In the meantime, we watch the combination of (super-low) Fed pricing and hope of a Greek deal boost risk sentiment and undermine the dollar for the start of the week."

"The main focus was the June Fed meeting where early year expectations of a hike this month now feel a long time ago. There was speculation that Yellen shifted her 2015 dot lower, although as our US economist noted it is hard to tell. With the Fed still in data-dependent mode, more convincing evidence of a Q2 growth pick-up is needed. This week’s May durable goods orders and PCE are the next big data," DB argues. 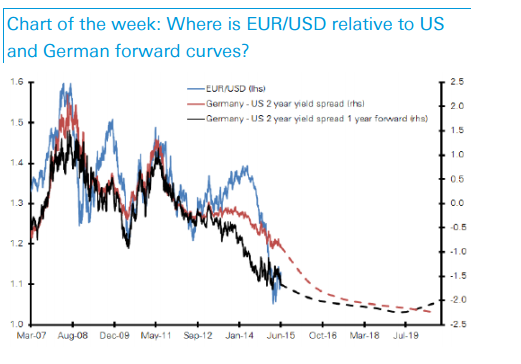 "In any case, the median FOMC forecast for 2015 remained at 0.625%, while forecasts for 2016 and 2017 fell 25 basis points...Alan Ruskin looked into what current forward rates imply for EUR/USD based on the past relationship of the cross to rate spreads. A Fed funds rate of 275bp versus a zero EUR overnight rate would imply a further 20 big figure move lower in the cross. Clearly, however, the burden of EUR/USD weakness now lies on the Fed. With the Fed still in data-dependent mode, more convincing evidence of a Q2 growth pick-up is needed," DB adds.
EURUSD Technical Analysis 2015, Press review EURUSD Technical Analysis 2015,

EUR/USD Double Top or About to Breakout? (based on dailyfx article) 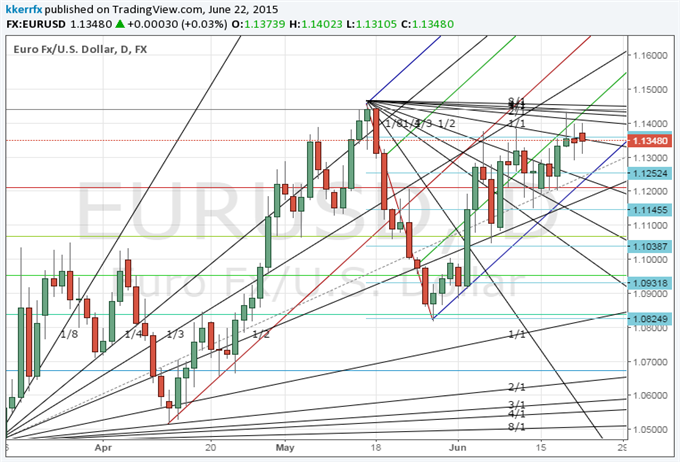 'EUR/USD recorded a new month-to-date high late last weekand actually came within a few pips of testing the quarter-to-date closing high at 1.1442 before stalling out. Is the euro undergoing a double top backtest before turning lower or is it about to break out and extend the multi-month advance? The next 24-28 hours should prove key in determining which path the euro will take as near-term cyclical analysis suggests we have reached an inflection point of sorts. If the broader downtrend is going to re-assert itself here then EUR/USD shouldn’t really rally past last week’s 1.1435 high. Traction above this level would be a strong sign that multi-month correction in the single currency is nowhere near finished. A failure, on the other hand, at or around current levels followed by a break of median-line channel support at 1.1230 over the next few sessions would confirm a change in behavior and re-focus attention lower in the single currency.'

Another 1.0% contract in demand U.S. Durable Goods may dampen the appeal of the greenback and generate a near-term advance in EUR/USD as ongoing slack in the real economy raises the risk for a further delay in the Fed’s liftoff. 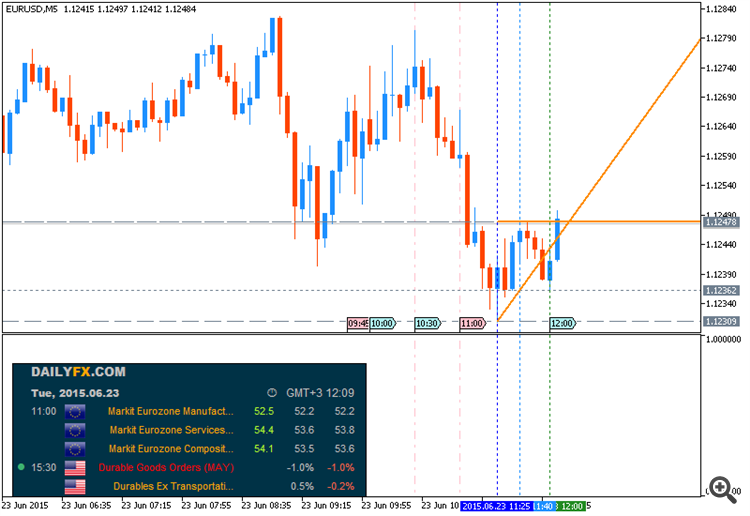 Fears of a slower recovery may encourage a growing number of Fed officials to adopt a more dovish tone for monetary policy, and we may see the Federal Open Market Committee (FOMC) retain the zero-interest rate policy (ZIRP) throughout 2015 in order to mitigate the downside risks for growth and inflation.

On the other hand, discounted prices paired with the pickup in private-sector wages may foster greater demand for U.S. Durable Goods, and a positive development may keep the Fed on course to raise the benchmark interest rate later this year as the central bank remains confident in achieving its dual mandate for full-employment and price stability. 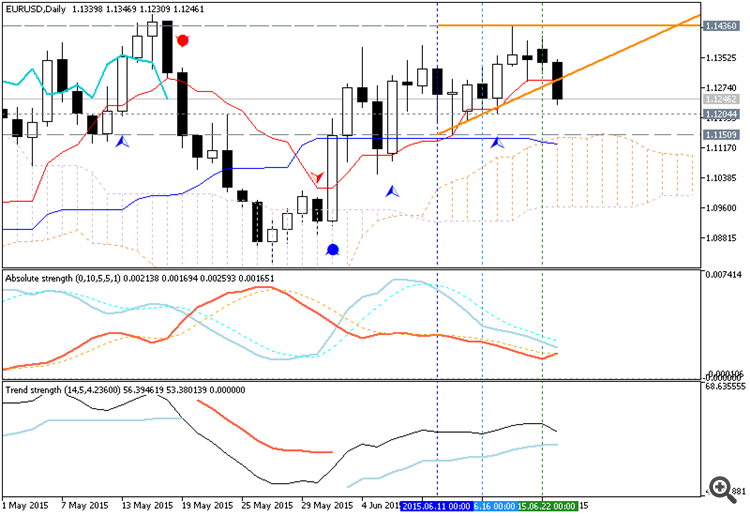 Impact that the U.S. Durable Goods report has had on EUR/USD during the last release

Barclays - Trading Setups For EUR/USD, USD/JPY, GBP/USD and AUD/USD (based on efxnews article)

EUR/USD: A succession of “doji” topping candles adds to our bearish conviction. We are looking for a move lower towards the 1.1050 area after reaching our initial downside targets near 1.1150. Beyond there we look for a move towards 1.0815 and then the 1.0460 year-to-date lows. The 1.1470 highs provide selling interest.

USD/JPY: Monday’s engulfing candle endorses our bullish view. We are looking for a move higher towards initial targets near 124.45 and then 125.85. Further out we are targeting the 132.20 area.

GBP/USD: We have turned neutral in the short term. Monday’s low close confirms the prior topping candle and signals a move lower in range as investors lock in profits from the June rally. Risk is seen towards 1.5640, possibly 1.5550, before a base can form. Overall we are bullish towards 1.6000 and then targets near 1.6200. 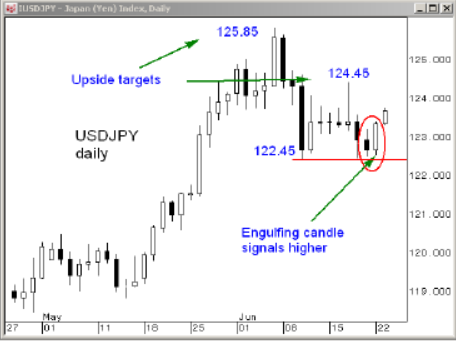 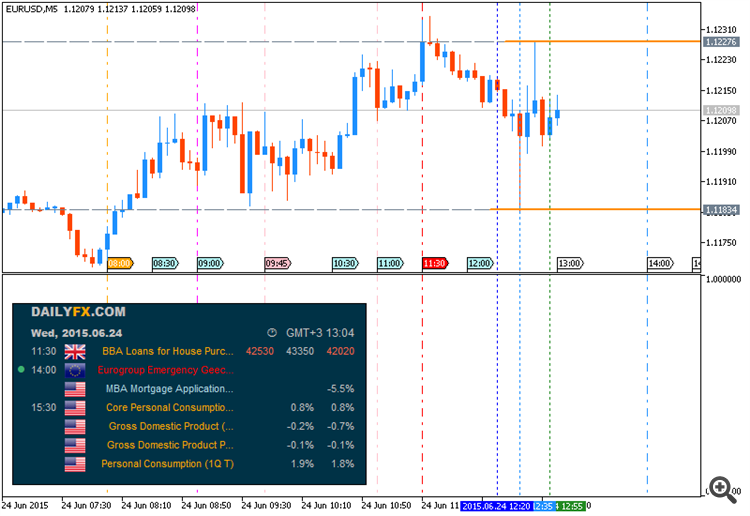 Even though the Fed remains on course to raise the benchmark interest rate in 2015, signs of a slower recovery raises the risk for a further delay in the normalization cycle as the central bank remains in no rush to switch gears.

However, slowing outputs along with the ongoing weakness in business investments may continue to drag on the real economy, and a dismal print may drag on the greenback as it dampens the likelihood for the Fed liftoff at the September 17 meeting. 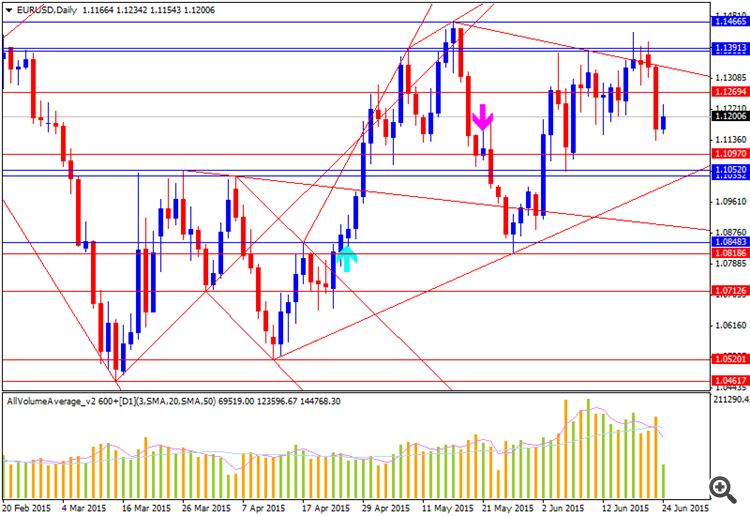 Impact that the U.S. GDP report has had on EUR/USD during the last release

When Greece and its creditors choose either default or debt forgiveness, the response from the Euro can be dramatic. Trading potential on such a provocative fundamental development will be substantial and certainly something we plan for ahead of time. That said, in the messy period of negotiating preceding this clear outcome, the currency is going to be erratic and difficult trading. Patience is warranted, but that doesn't mean we have to sit staring with bated breath. There are developing technical and fundamental themes in other corners of the market.