DXY: dollar ahead of Fed meeting

Today the Fed meeting begins, which will end on Wednesday with the publication (at 19:00 GMT) of the decision on interest rates. Based on the results of a two-day meeting of the Committee on Open Market Operations, the Fed is expected to double the pace of its stimulus rollback, cutting the volume of purchases by $ 30 billion monthly (previously the bank announced a decrease in purchases by $ 15 billion monthly), with the postponement of the completion date of this program to March since the summer of 2022. Many economists expect two rate hikes next year, while market participants expect three hikes. "The economy is in very good shape, inflationary pressures are high, so, in my opinion, it is advisable to consider postponing the curtailment of asset purchases, which we actually announced at the November meeting, for a few months earlier," said Fed Chairman Powell last month. According to him, the rise in inflation is no longer temporary, while the situation in the American labor market also continues to improve.

Thus, the dollar received support after the publication of the weekly report of the US Department of Labor with statistics on the number of jobless claims. According to data released by the Department of Labor, the number of initial jobless claims in the United States fell last week to its lowest level in more than 50 years. Initial claims for unemployment benefits fell to 184,000 in the week of November 28 - December 4, the lowest level since September 1969. Applications for unemployment benefits gradually declined throughout the year amid rising demand and declining supply in the labor market. The number is now lower than it was before the pandemic that caused a sharp rise in layoffs in March 2020. In 2019, applications averaged 218,000.

The dollar remains strong and the DXY dollar index remains positive ahead of this important event. The importance of higher Fed interest rates and the prospect of a widening divergence of interest rates in the United States (in comparison with other economically developed countries of the world) are coming to the fore, creating the preconditions for the further strengthening of the dollar.

At the time of this posting, DXY dollar futures are traded near 96.43, just above the midpoint of the range between local highs near 96.94 and local lows near 95.54, reached at the end of November, while remaining in the 16-month local highs.

Market participants following the dynamics of DXY futures can probably count on their further growth. Our buy stop would be just above the recent local high of 96.59 with a restrictive stop loss below the local low of 95.84. The nearest take-profit is 96.94, 97.00. The more distant DXY upside target is the 100.00 mark.

In an alternative scenario, the first signal to sell DXY futures will be a breakout of the important support level of 96.00, and a confirmatory signal will be a breakdown of the lower border of the range passing through the level of 95.54.

However, in the current situation, long positions on the DXY futures are preferable due to expectations of further strengthening of the dollar ahead of the Fed meeting next week and the gradual withdrawal of stimulus programs by the US central bank leaders. 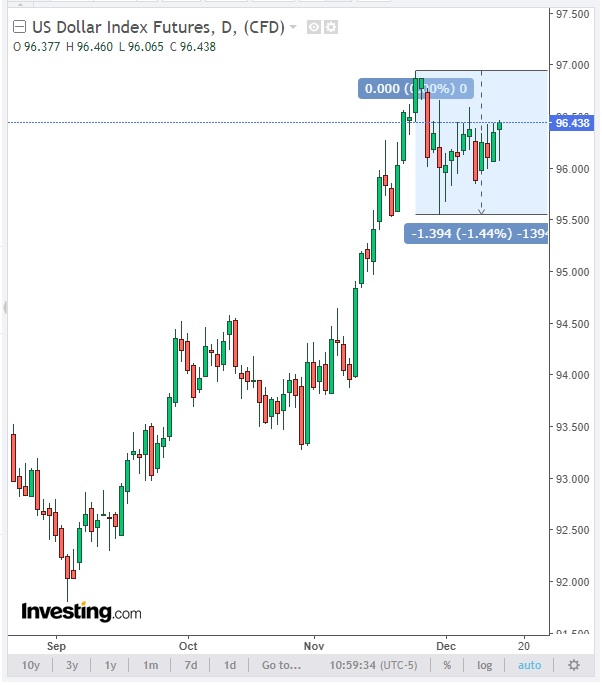 *) the most up-to-date "hot" analytics and trading recommendations (including entries into trades "by-the-market") - https://t.me/fxrealtrading

Changes in Trading Hours for the US Independence Day