Could you make an expert advisor for the indicator trend envelope mtf & alerts? Buy on blue, sell on violet, close previous position on color change. Also with the ability to choose different chart time frames, stop loss, and take profit for metrader 4. The build is 409. Thanks in advance.

Does anyone know the name of the green and white line indicator in this picture?

From the regularity of step like changes it could be some multi time frame version of an indicator, but can not tell exactly which one (to many possibilities)

Jerrica:
Does anyone know the name of the green and white line indicator in this picture?

I just joined the Advanced Elite section here at ForexTSD a little while ago, and am amazed by the wealth of info and coding skills on this site WOW.

I came across the Dynamic Zone Indicators section, and must say I was so impressed with the (Dynamic zone Rsx nrp_alerts_lines_divergence.mq4) Indicator I have opened a small live account and have been playing with it ever since. Excellent job, Mladen.

I am not to sure how we are supposed to request an EA for coding for a specific Indicator, but if possible I would like to see one coded for the (Dynamic zone Rsx nrp_alerts_lines_divergence.mq4) Indicator.

I believe that Indicator's signals can be taken with out much else as a filter. But would like it to have the option to trade on any of the alerts that the Indi can signal, ie, slope, fiftyline, upper and lowerzone, and OBOS zones, or just trade one of those signals at a time ie slope. It would be great if it could also trade on a current signal, or wait for the next bar. Also a timer, breakeven, take pfofit, and trailing stop would be excellent. Also please give the option to have confirmation of the signal on another time frame, so buy H1 if H4 is buy also.

I apologize if this not the way to request some coding.

I write something on the Website because it does seem to correlate with your piece of writing in the past while I was thinking about the tick data lately. 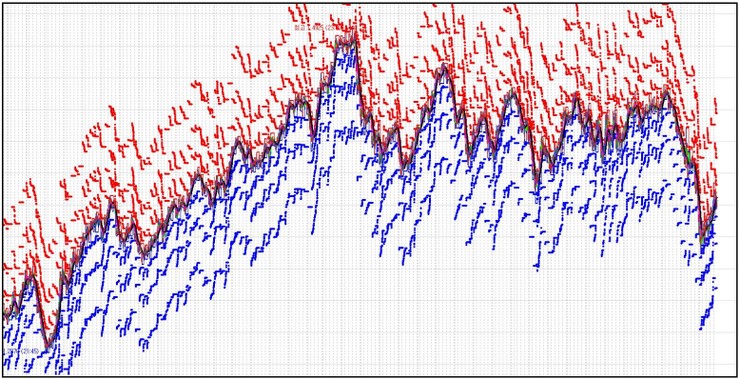 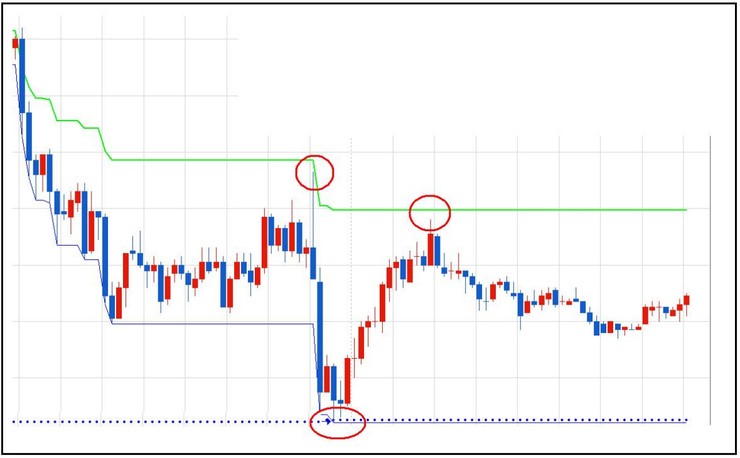 It is the picture 2 that was expressed to a supporting line and a line of resistance by using this.

It can’t be seen correctly where a supporting line is or where a line of resistance is when it presents only the tick data equivalent to one TF, but, I think there may be some spot where has particularly darker color than other spot, relatively having many dots and being overlapped if it is expressed to each TF with the tick data. It was interpreted to be shown such like the picture number 2 by understanding it as a supporting line/ a line of resistance.

In the picture 2 used by a band, it is not sure that it is other indicator or the band that was made by the result from each TF.

But, as you see the picture 2 and 3, there is the part that presented a supporting line/ a line of resistance in dotted line. 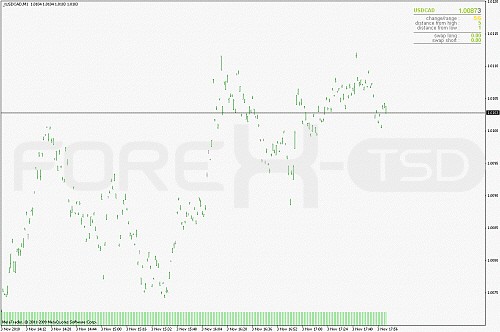 It was interpreted that the contents of #238 was expressed to only one TF, I think it may be possible to express the same as the number 1 if it is expressed over several TF on the same principle. With this result, it may be shown a supporting line/ a line of resistance the same as the number 2 and 3. At this moment, I have a question. It has to be conducted one of offline chart by activating an indicator on one chart for expressing generally the tick data.

For example, it will be the figure that is expressed to a supporting line/a line of resistance on M1 chart, M5 chart or upper chart in a dotted line, and that there will be other indicator on SUB_WINDOW. It is the circled part in red on the number 2 and 3 that was marked where the price of high or low reached on the dotted part. In the number 2 picture, it is the figure that the dotted line in which it shows a line of resistance was not occurred in the high score part. Without respect to this, first, it may be expressed to a supporting line/ a line of resistance on the chart by using the tick data as I said earlier.

I think that it may need various colors to understand visually with easy a supporting line/a line of resistance on the chart.

Of course, it would be a good way if it is possible to change the color, a dotted line or a line depending on taste. Basically, it can be a line, not a dotted line; I recommend the color as follows; as it expresses a supporting line/ a line of resistance of several TF. 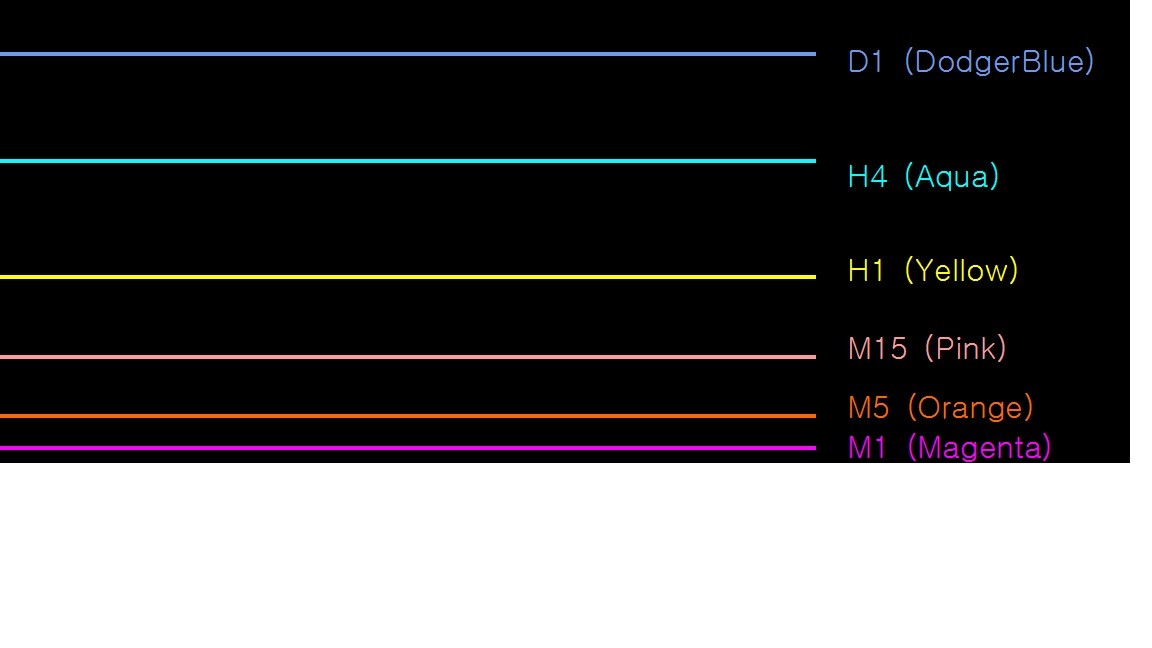 I think that some additional info about tick data needs to be told :

In tick data, time is there only to have some sort of ordering. But even like that you will have bars with same time (due to metatrader minimal resolution of 1 second). So, since it is there only as a convenience to "humor" metatrader expected format, we can completely ignore the time component of the tick data.

Which leads to next part : tick data for all time frames must be the same. If it is not, then it would mean that, for example, 5 minute chart is not receiving same price changes as 1 minute data and that would be a major bug of which, fortunately, we can not "accuse" metatrader platform. So, regardless of which time frame the indicator is attached to it must produce the same history file and thus the same set of ticks. And that is what it does : it is sitting till it gets a new tick, writes it down (accumulating if it is required( and the makes sure that every chart containing that currently uses that data, gets a signal of a new tick. It does not reconstruct the tick data from some other time frame data since tick data does not exist at all at any other time frame and the only way it can be generated (in metatrader of course) is to record the incoming ticks

You can generate various tick numbers tick data (when it counts how many ticks were recorded so far for a current bar and volume is used for that purpose - hence you have always the same volume in tick data charts) but those do not have anything to do with the tame frames they originate from. The only, and I repeat the only, difference in 2 tick data charts can come from a different starting time of tick data recording in which case "tick bars" will be different if the number of ticks accumulated is > 1, but that is the case with any custom time frame charts (range bars, renko charts and as it is obvious now with tick data). That way (starting indicator in different moments) you can get what seems as a different data, but if you use 1 tick data then the only difference will be a couple of first bars generated (recorded)

As of the rest : I have tried to make tick data offline charts behave exactly the same as regular chart. There is one bug that I am aware of, but unfortunately I can not solve it. It happens when the number of offline bars generated is greater than the maximum number of bars allowed for a chart (the "max bars in chart" property of charts) in which case metatrader for some reason starts sending "signals" to offline chart with a lag. It only happens when that number of bars is reached and can be avoided by making the max bars in chart greater, but it also shows that the problem is in metatrader. Other than that, you can apply any indicator to tick chart and it should work. Format of data used is standard so no properly coded indicator that works on a current time frame should have any problem

Hope this clarifies some things about the tick data

There is a possibility to make,these two indicators:

As I explained about "meters" already, they are good for bounded indicators (when the bound is known, like rsi and stochastic for example). MACD does not have a known bound (just change the time frames on the same symbol and you will see minimum and maximum values increase as the time frame is "longer", as an example) and leader ema is not even an oscillator so it can not have any bound at all (it depends exclusively on underlying data)

There is a possibility to make,these two indicators:

Plz see this document below.

Thank you in advance.

Request for additions to OMA

I would like to request to add a feature on OMA. An option to allow averaging result to be displaced forward by x number of period (x to be input by users).