Some of you might remember this one : originally it was a part of an expensive system. Than it was coded as dots because of the repainting problems in metatrader. Here is a version for metatrader 5 : slightly changed the look of it (Bollinger bands is drawn as the "shadow" in the background)

One more average (from this thread https://www.mql5.com/en/forum/179662) - metatrader 5 version (simbas combination of parameters on the picture

Added colors to show the slope of the average. To turn of the colors set the first two colors to same value

Added multi time frame capabilities. Multi time frame can be drawn the "classical" (step like way - third picture) or interpolated (points between the end points smoothed through linear interpolation - fourth picture). In multi time frame mode two more colors are shown : they are marking the last (current) bar of the higher time frame which is a subject to changes (it will be changed until the chosen time frame bar is not closed)

"Classical" averages with a twist :

The "equal" part depends on the "Angle threshold for color steps" parameter : if you set 90, it is obvious that it will never be reached. Default for this parameter is set to 20 degrees

This one was originally developed on TSD by linuxser, so I decided to keep it's name (due to tremendous effort linuxser made to solve some problems of this indicator in metatrader 4).

Metatrader 4 version did lack buffers for this one to display all the necessary data, so the usual implementation was to make it 2 indicators. Since the limitation does not exist in version 5, it is a single indicator now. What is an addition is the timer (the timer attached is and EA, not an indicator). As far as I know woodies club is using indicator similar to this on a 5 minute chart strictly watching on the time left for the bar to complete. Since the timer attached really does show time every second (it even shows when the new bar is "late"), the two together are what one could call a "woodies system"

PPS: for the eClock to work properly, make sure that your computer time is synchronized. The easiest way is to do it through "adjust date time" in windows (something like on this picture) otherwise your local time and broker time may have difference in seconds.

Depending on parameters (stochastic 1, stochastic 2 and smoothing) it is :

x -> parameter is less than or equal to 1

n -> parameter is greater than 1

Slowly preparing the rest of indicators normally found on metatrader 4

Since parameters are descriptive now (new feature of metatrader 5) just an explanation what does "Hide connecting lines between periods" do. This indicator is drawn as indicator buffers and not objects. hence when period changes, it will draw a "connecting line" between two periods like on this picture : 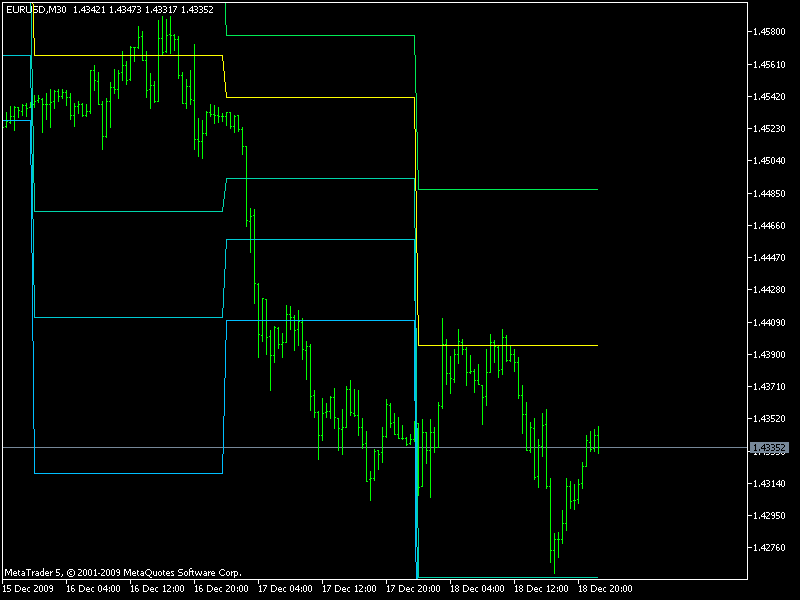 When "hiding" is turned on, it will show it like this picture, but the "cost of it is that one point is missing (it needs to make a break in data in order to hide those connecting lines) 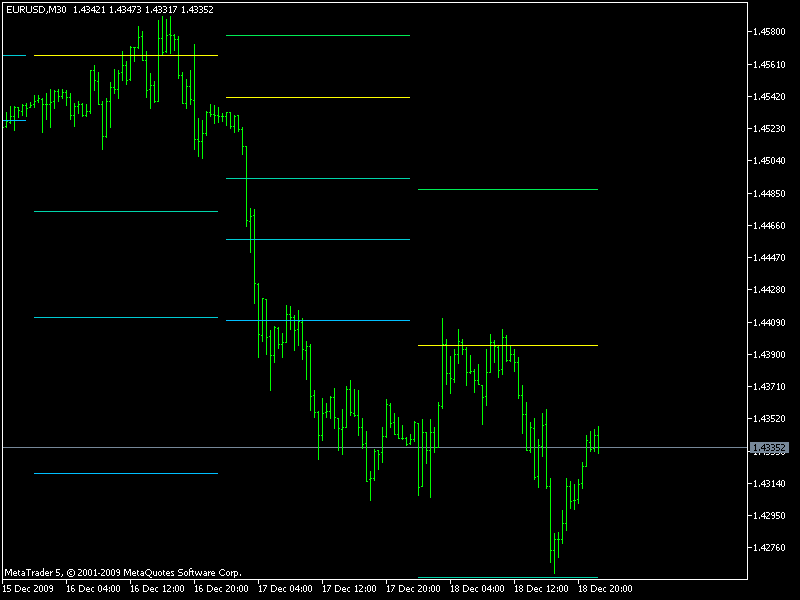 PS: no yearly pivot in this one

Here is a simple setup of a couple of indicators (mrtools excellent work reminded me of Guppy MMA). Also, the highs/lows, due to the fact that it covers all the time frames supported by metatrader 5, does not have equivalent in metatrader 4

PS: the simple.tpl should be copied to profiles/templates sub-folder of metatrader 5 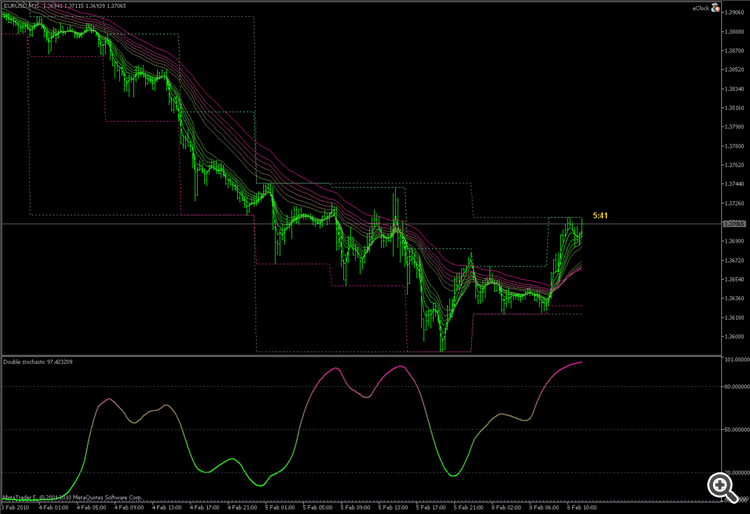 Adding this one to metatrader 5 collection too. 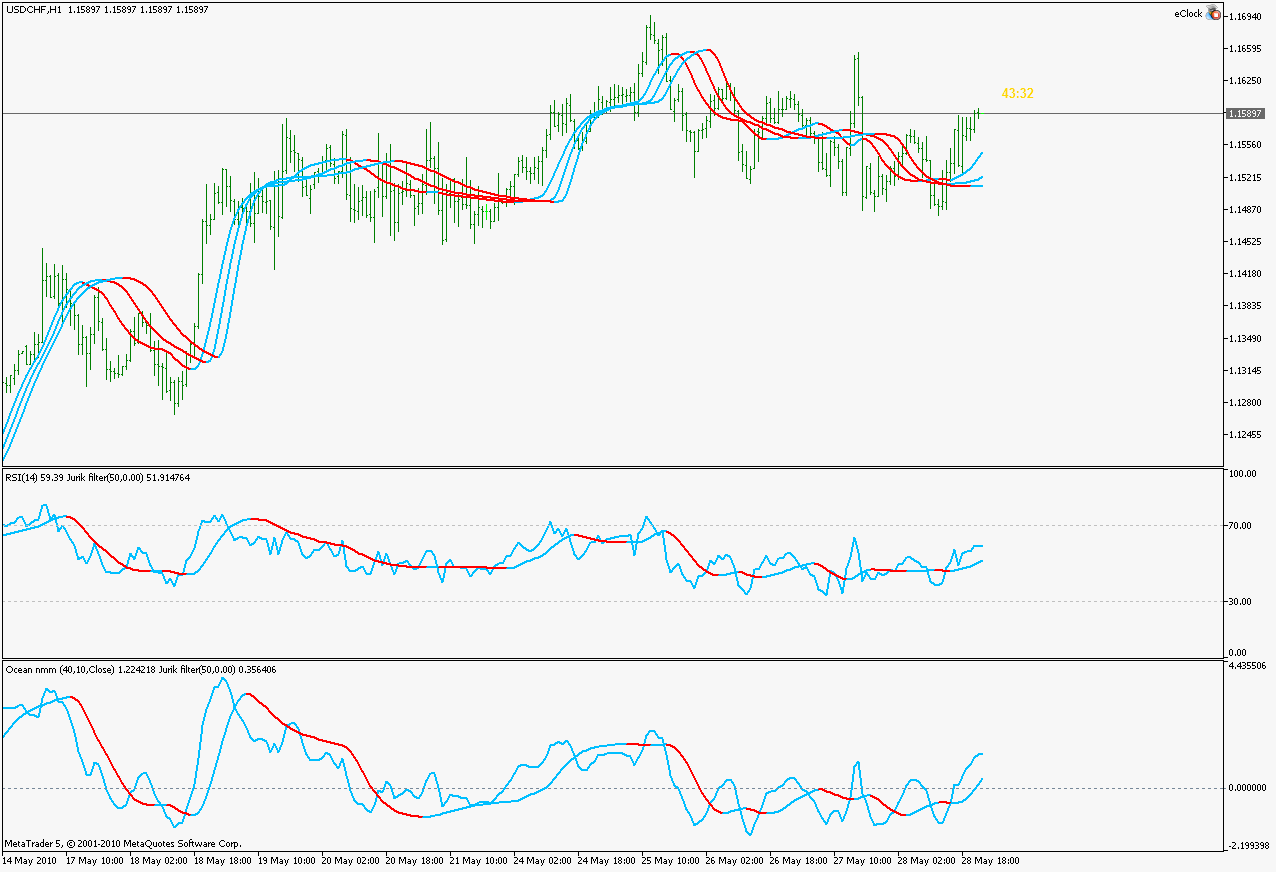 This is one of the good things in the new metatrader. Unfortunately some other things are not so good (for example for the last couple of months color histogram 2 does not work as it should, and they still did not notice it). Some other things that are far more serious are still not solved, so it seems that we have to wait some more. Till then we can test it and prepare ourselves slowly in case it becomes a usable trading platform
Files:
jurik_filter.mq5 5 kb
jurik_filter_mt5.png 68 kb
One more average ... Metatrader known bugs ... Elite indicators - metatrader

Moved your post here since you can see it and since the original indicator was posted here. Extended the pivot points indicator from a few post above )so the one that can draw pivot points for any time frame) to draw middle lines too (so this one has an option to turn on middle points to regardless of the calculation method). Will find some solution for GMT shift too

Could you please convert this indicator in mq5 format?