NZD / USD pair has been declining for a fifth consecutive session. The reason for today's sharp decline was the new application from the RB of New Zealand that it will soon tighten lending conditions of investment in real estate. The real estate market, especially in the major cities of New Zealand, is overheated, and mortgage for housing up to 55% of the assets of the banking system. RBNZ plans to introduce new restrictions on mortgage lending program, starting from 1 September. As Graeme Wheeler, head manager of the RBNZ, said today, the banking system of the country was heavily exposed to risks from the real estate market. According to economists, by the planned restrictions RBNZ wants to free hands to reduce the interest rate in the country, without causing further overheating of the housing market. Reducing the New Zealand dollar in the foreign exchange market began last Thursday when

from the RBNZ it was reported that the bank will present on July 21 a new assessment of the economic situation in New Zealand.

Yesterday we published data on inflation in the country in the 2nd quarter, which turned out to be weaker than expected, strengthening the likelihood of further rate cuts.

The consumer prices index (the CPI), published on Monday, and is a key indicator of inflation, was released with a value of 0.4% (vs. 0.5% and growth of 0.2% in the previous quarter).

In March, New Zealand's central bank lowered its key rate to the current level of 2.25%. Subsequently, the same comments from the RBNZ said that the central bank fears a further deterioration of the global economic outlook and the decline in inflation expectations in most of New Zealand. Inflation expectations in New Zealand decreased,  the prospects for the world economy, particularly in relation to Brexit, deteriorated.

On Thursday, the RBNZ will publish its assessment of the economic situation, which economists say, may indicate a decrease in rates next month. The meeting on the issue is scheduled for August 10.

Today, the New Zealand dollar may be supported, if the price index for dairy products, prepared by the Global Dairy Trade, will be released with a relatively high result.

New Zealand is the largest exporter of dairy products on the world market.

An export of dairy products is not less than 18% of total exports. Therefore, the New Zealand dollar has a high correlation with the prices for dairy products. 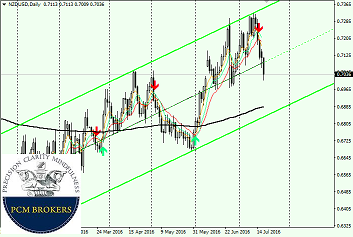 The big drop on USDJPY