English
...
All Blogs / Other
Other

What does the coast of Australia and your average trade length have in common?

What is the length of Australia's coastline? 12,500 km, 25,700 km or more? Well, the three answers are correct! It's weird but actually very simple to explain. It just depends on the size of the measuring stick. If you draw straight lines along its coast, each line of the size of 500 km, you will get the first answer. As you start reducing the size of your measuring stick, you'll be able to cover more details, making the length longer and longer. This is called the Coastline Paradox, and you can learn more about it in this awesome video made by Veritasium.

Now, how can this be applied to Forex, and help us to find the optimal average trade length?  Well, let's take a look at this recent chart in the EURUSD (Figure 1). Suppose we were actually able to go short at the highest point in the chart (1.1495) and cover our position at the lowest (1.0642). It would have been an awesome trade, where we would have made 853 pips in a month! 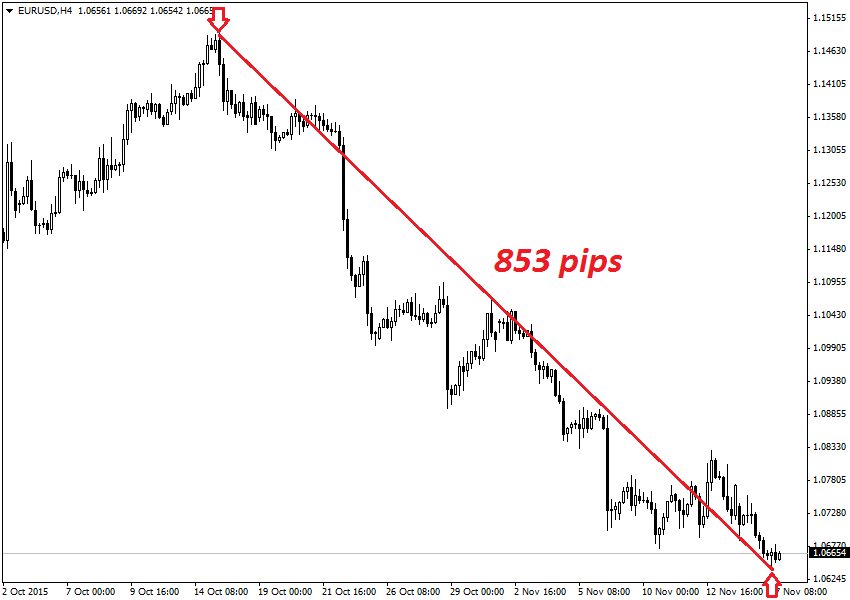 We covered the whole downtrend, from the very top to the very bottom. In this situation, we can safely say that we made the most pips we could have ever made for this period, right? Wrong. We could have theoretically made more than this. A lot more.

Let's continue to pretend we are the perfect trader and revisit the trade we made. How could we be able to make more pips in the same period as before? A simple way would be to break our one position into three smaller ones. Suppose we now go short at 1.1495 just as before, but this time we cover our position at 1.0896 (+599 pips). We immediately reverse it into a long trade up to 1.1071 (+175 pips), closing it and reversing it again into a short trade until our previous ending point 1.0642 (+429 pips). Now we made three winning trades, banking a total of 1203 pips; about 40% more than the original trade (Figure 2). 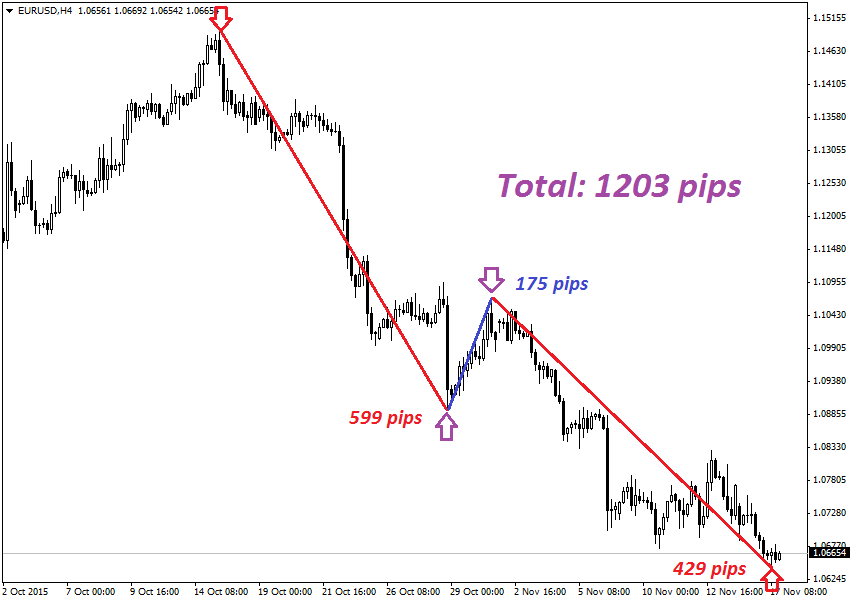 Since we're at it, let's try and break it down to even more trades. If we make 7 perfect trades we make  a total of 1661 pips (Figure 3). That means that in a period where the EURUSD's total range was 853 pips, we were able to make almost twice that amount! 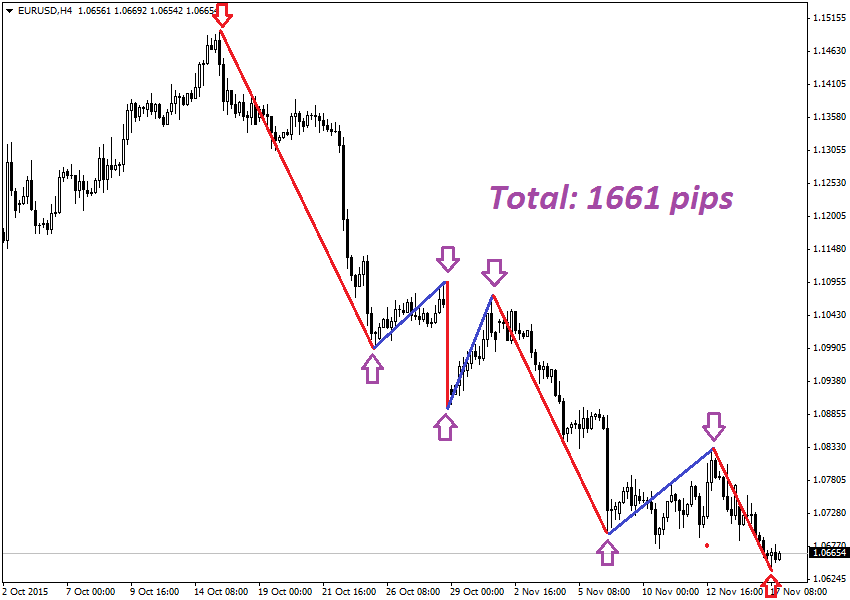 Of course this is not the real world. We would never be able to time our trades so perfectly. But these examples are not intended to give you the best entries. They demonstrate that, by the same way that Australia's coast length (or any coast for that matter) increase when we reduce the size of the measuring stick, we increase our maximum profit potential when we reduce the average length of our trades.

I can actually demonstrate this concept with a more real example. One of the strategies our team developed aims to take quick profits, usually in the range of 10-25 pips per trade on the EURUSD. Sometimes, we are able to catch several quick opportunities like this while the market is moving completely sideways. In the period demonstrated below (Figure 4), from the moment we open the first position to the moment we close the last one, the market moved from 1.4210 to 1.4189 (as shown in the red lines). If we would be trading longer term and holding a short position during this period, we would be making only 21 pips. However, by making quicker trades, we were able to open 6 different positions, and amass 92 pips in total, more than 4 times the amount we would get from a single position.

Please understand that average range length and average time length are two closely linked concepts. Most strategies' trade duration are more of an indirect decision, because traders usually aim at profit and stop levels rather than how long they will will have their position open. But when they start taking profit/stopping tighter, the average time length will invariably reduce as well, as markets tend to cover a higher range as time passes.
​
All this may lead to a hasty conclusion: the quicker our trades, the more we increase our maximum profit potential. And the more profit we can have, the better! But before we start scalping our way to success, we have to understand that there are some factors that may significantly reduce the profitability (if not kill it completely) of extremely quick trades.

The first one is pretty obvious, and I discussed it in the previous blog post: transaction costs. If we are aiming to catch a 50-pip price movement and we pay 1 pip spread per trade (let's not consider commission and rollover in this example), our trading cost will be only 2% of the profit we make.  On the other hand, if we aim to close the trade with 5 pips profit, the cost relative to our profit is 10 times stronger!

The impact of transaction costs alone should prevent us from abusing the extremely quick trades strategies. But there is one other factor that may make quick trades even more difficult as well. Many traders and analysts believe that the shorter the time frame, the more "noise" there is in the market. That is, price movement becomes more and more random when we try to analyze them in shorter lenghts. If this is true, the expected returns of quick trades should be proportionally smaller because of this added noise, thus reducing the very same profit potential we were trying to increase in the first place. Personally, I am not sure if it this is a true statement. I read many arguments for and against it, but I've never read a good serious research on this matter, so I'll leave this open for now.

But what is the optimal average trading length, after all? In our experience, we have been more successful developing trading strategies that use the M15 to H1 charts, with an average trade duration ranging from 1 to 8 hours. Less than this and costs start causing too high of an impact in our trades. More than this we limit too much our profit potential. But of course, this is only suitable for the strategies we came up with so far. Each strategy has a different optimal trading length, and there are many factors to take into consideration. Transaction costs of your broker, rollover interest of the pair you're trading, expected return of each single trade and maximum profit potential. All these factors greatly contribute to a trader's overall performance, and they should be always carefully analyzed when building a trading strategy.

EURUSD Did you see it coming? Yes Plutus Reversal Pattern-TRADING WITH WEIS WAVE WITH SPEED INDEX