China collapse: yuan predicted to drop 10% over next year

The yuan may get significantly weaker, as analysts predict the Chinese government to stand down from its usual interventionist stance.

Adarsh Sinha, head of Asia Pacific G10 FX strategy at Bank of America Merril Lynch (BofAML) Global Research, expects a 5-10 percent depreciation over the next year, "even though it might be stable over the next few months."

Whenever the country is facing any economic volatility, "they always keep the currency as flat as a pancake," he noted.

"The tricky thing for China is that their capital account is gradually opening up, which makes it difficult for them to credibly stabilize the renminbi now."

Further monetary easing is widely expected as part of Beijing's measures to restrain the panic-selling in mainland stocks. Analysts widely agree, that will put the onshore renminbi (CNY) under heavy pressure.

However, if the world's second largest economy wants to gain MSCI status and internationalize the yuan, it cannot keep intervening in currency markets as it's done in the past, analysts say.

Jeremy Stevens, international economist at Standard Bank said in a note that the intervention steps contradict efforts to allow market forces to determine the allocation of resources. "Herein was the first major test of embracing market discipline."

In recent sessions, the onshore currency (CNY) has traded in a narrow range around 6.2 per U.S. dollar but the offshore yuan (CNH), traded outside the mainland, has hit fresh three-month lows against the greenback this week.

This signals that the CNH is a more freely floating currency thus it is harder for the People's Bank of China to intervene, in comparison with the onshore yuan. 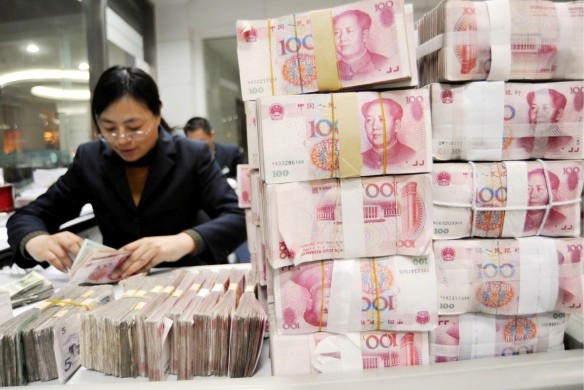 As for IG analysts, they consider that Beijing is indeed minimizing forex intervention as part of the internalization plan. Meanwhile, there is a speculation about a widening of the currency band to -/+3 percent from 2 percent currently.

IG believes MSCI was right to turn away the A-50's bid to enter its emerging markets index last month, naming Chinese markets "immature" because of Beijing's inability to control market declines through regulation and the PBoC's intervention.

In fact, the negative impact of any currency interventions on domestic liquidity could offset monetary easing, BofAML said, referring to the recent avalanche of criticism towards the government's weighty actions in markets.

Renewed measures to restore confidence were announced on Thursday, with the banking regulator announcing it would allow financial institutions to renegotiate terms regarding lending using stock as collateral. This follows news on Wednesday that holders of more than 5 percent of any China-listed firm have been prohibited to sell any of their stake for half a year.

These moves were shocking for traders, also hurting China's financial liberalization program, especially with the looming decision of the International Monetary Fund on whether to include the yuan in its basket of reserve currencies.

Indeed, analysts now predict market liberalization to be delayed by at least one or two years as a result.

Besides monetary stimulus, the collapse in A-shares could have a contagion effect spreading to the yuan.

BofAML considers that harm could widen far beyond the stock market to assets like the currency, debt and even property, expecting these to get re-priced lower going forward.

"If the market continues to fall sharply, stock lending related losses could run into trillions of renminbi, of which, banks and brokers may have to bear a meaningful share. These potential losses can be especially dangerous to brokers whose capital base is less than 1 trillion renminbi. Even more important, the opaqueness of China's financial system and the lack of clear definition of risk responsibility mean that contagion risk is high, similar to the subprime crisis," BofAML said to CNBC.

(01 October 2020)DAILY MARKET BRIEF 2:Markets in China are closed for the Mid-Autumn Festiva