Markets To Watch In The Week Ahead: Dow Jones Industrial Average (based on the article)

DJIA daily is testing 20,125 resistance level together with ascending triangle pattern to above for the primary bullish market condition to be continuing. 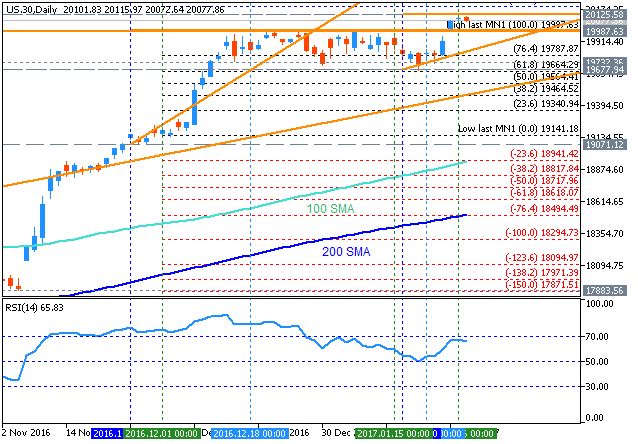 Daily chart is located inside Ichimoku cloud: the price is near and below Senkou Span line which is the virtual border between the primary bearish and the primary bullish trend on the chart. 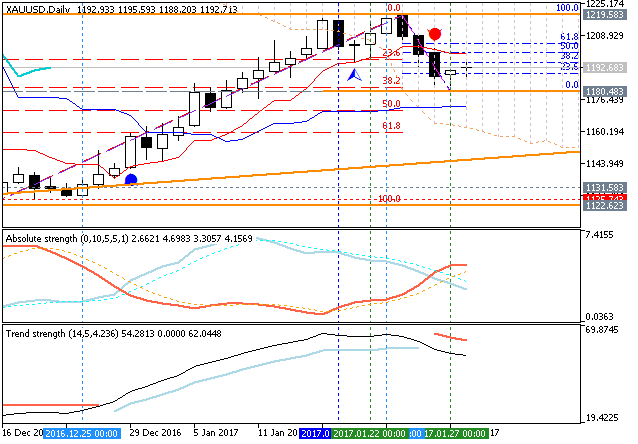 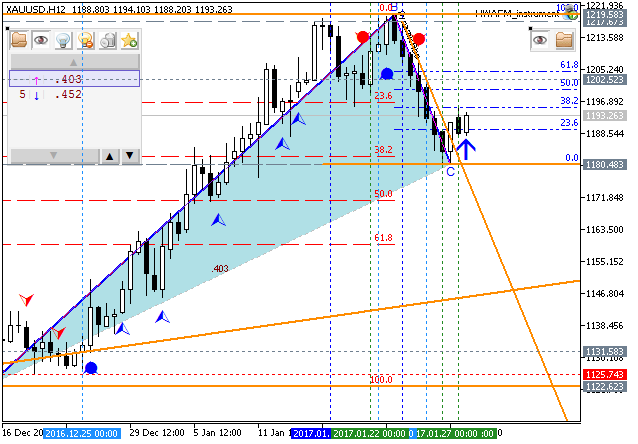 If the price breaks 1,219.58 resistance level to above on daily close bar so the reversal of the daily price movement from the ranging bearish to the primary bullish market condition will be started.
If the price breaks 1,180.48 support level to below on daily close bar so the ranging bearish trend will be resumed.
If not so the price will be ranging inside Ichimoku cloud waiting for the direction fo the strong trend to be started.

Fed Unlikely To Provide Support For Gold Next Week - Analysts
(Kitco News) - After disappointing economic growth at the end of the fourth quarter, all eyes will be on the Federal Reserve next week as they hold their first monetary policy meeting of the year. Ahead of the meeting, analysts are cautious as to what impact it could have on gold. Most analysts said that gold could test the lower bounds of its...
Forecast for Q1'17 - EURUSD Technical Analysis 2015, Forecast for Q2'16 - 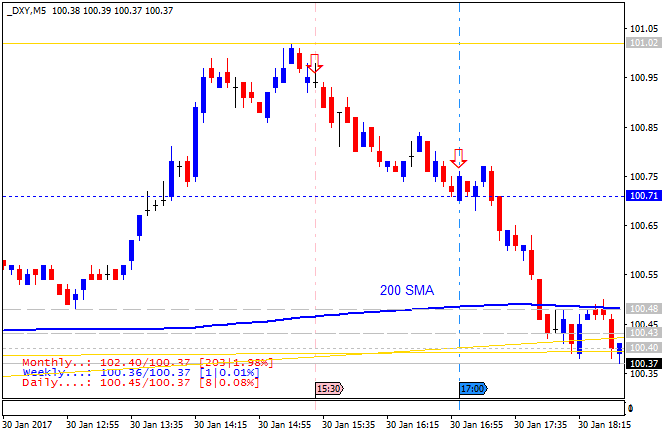 The Dollar Index M5 timeframe was bounced from 101 resistance level to below to 100.37 support level by 200 SMA reversal area to be crossing. For now, M5 timeframed price is located below 200 SMA in the bearish area of the chart for the ranging within 100.23/100.48 levels for the waiting for the direction of the strong trend to be started.

U.S. Personal Income Rises 0.3% In December, Slightly Less Than Expected
Personal income in the U.S. increased by slightly less than expected in the month of December, according to a report released by the Commerce Department on Monday. The report said personal income rose by 0.3 percent in December after inching up by 0.1 percent in November. Economists had expected income to rise by 0.4 percent. Disposable...
Forecast for Q1'17 - EURUSD Technical Analysis 2014, Forex News 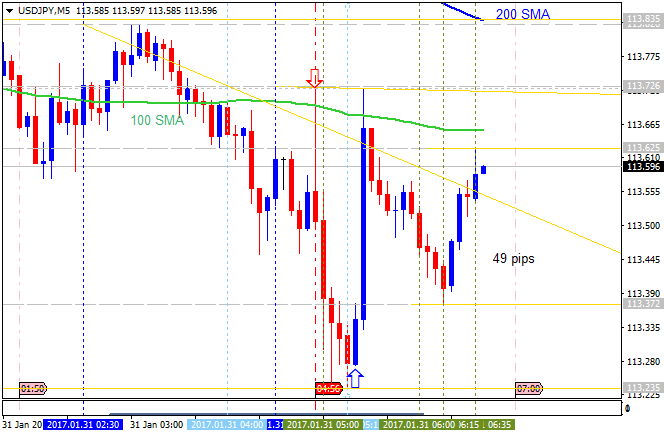 [EUR - ECB President Draghi Speaks] = Speech to deliver opening remarks at a joint conference by the European Central Bank and the European Commission, in Frankfurt. 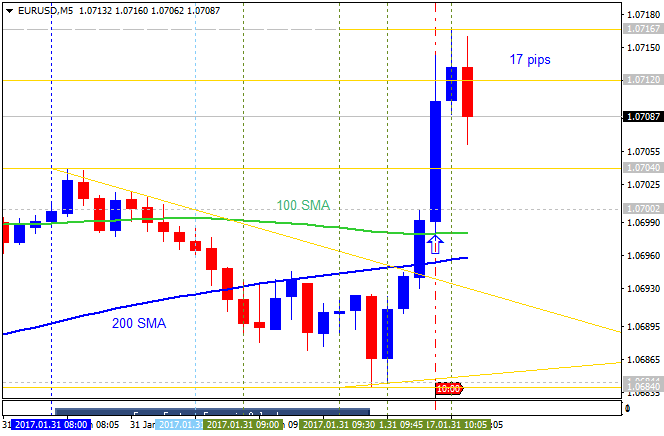 Welcome address
It is a pleasure to welcome you here today to this joint ECB and European Commission conference on Europe’s digital integrated market of tomorrow. The conference title invites us to look to the future: to a European financial market which is both integrated and digital. It is indeed fitting that these two elements are considered together. In a...
Forecast for Q1'17 - EURUSD Technical Analysis 2016, Forecast for Q4'16 -

[CAD - GDP] = Change in the inflation-adjusted value of all goods and services produced by the economy. 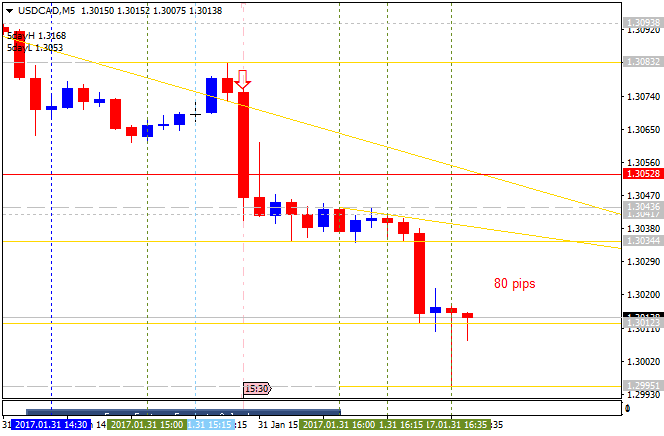 Exxon Mobil Corp (NYSE: XOM) entered into oversold territory (based on the article)

XOM shares broke 100-day SMA/200-day SMA reversal area for the bearish condition: price is breaking 83.30 support level to below for the bearish trend to be continuing. By the way, RSI value is going to oversold level which may be indicated the bearish breakdown or the reversal back to the bullish trend. 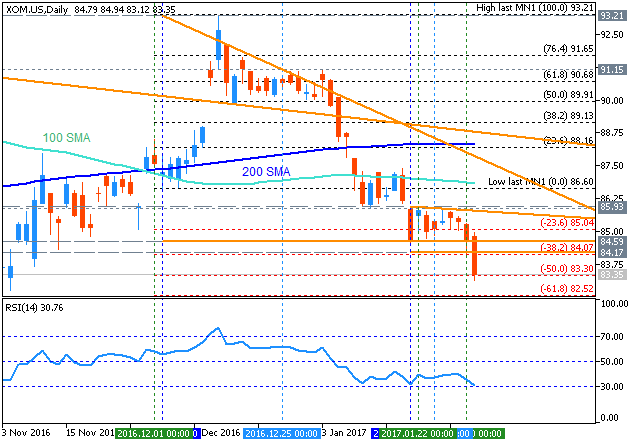 Stock Market A To Forecast for Q2'16 - Indices Technical Analysis

[NZD - Unemployment Rate] = Percentage of total work force that is unemployed and actively seeking employment during the previous quartey. 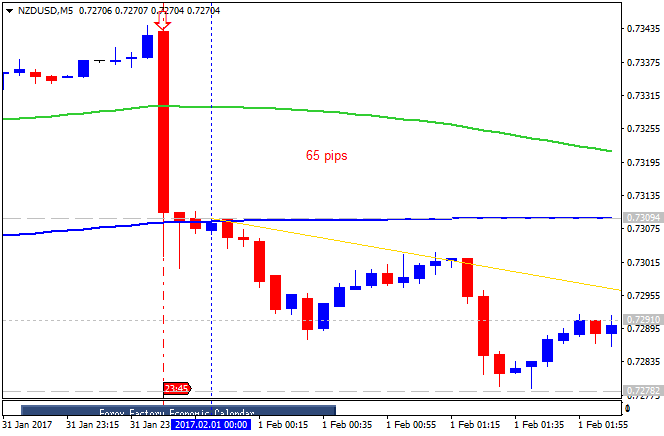 [CNH - Manufacturing PMI] = Level of a diffusion index based on surveyed purchasing managers in the manufacturing industry.

"The manufacturing sector in China continued to expand in January, albeit at a slightly slower pace, the National Bureau of Statistics said on Wednesday with a manufacturing PMI score of 51.3." 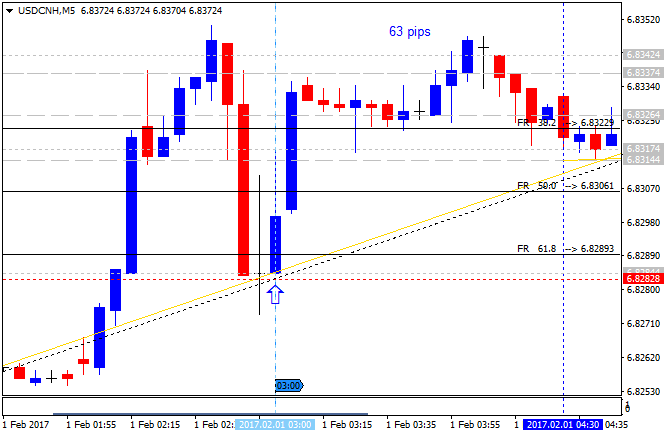 WTI crude oil and Brent crude oil: an update on support levels for short position (based on the article)

WTI crude oil is testing 54/55 resistance area to above to be turned to the ranging market condition to be located within 100 SMA/200 SMA reversal area. The key support level is already formed by the price at 39.17 to be crossed for the weekly bearish trend to be resumed. 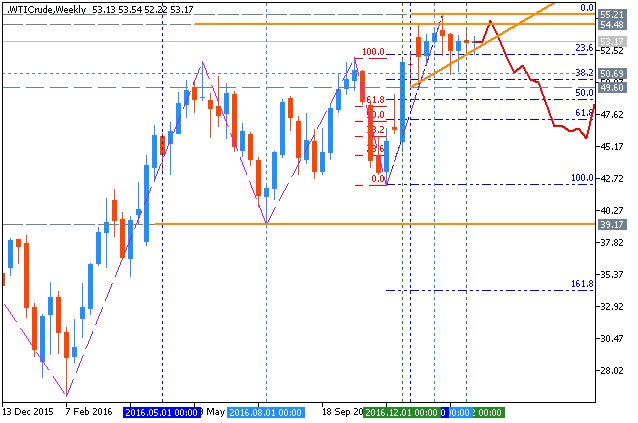 "The long-term chart of WTI crude oil shows how the 2016 bounce occurred off of the important $30 – $40 per barrel support zone, which is where the 2008 – 2009 crude oil bear market bottomed out as well. The fact that the “smart money” has shorted this bounce like crazy increases the chances that it’s a “dead-cat bounce” that leads to another correction. If the latter event occurs, I want to see how WTI crude oil acts at this support zone – if it breaks below, that would be a sign of even further weakness."

"Brent crude oil has a similar $30 – $40 per barrel support zone that is worth watching" : 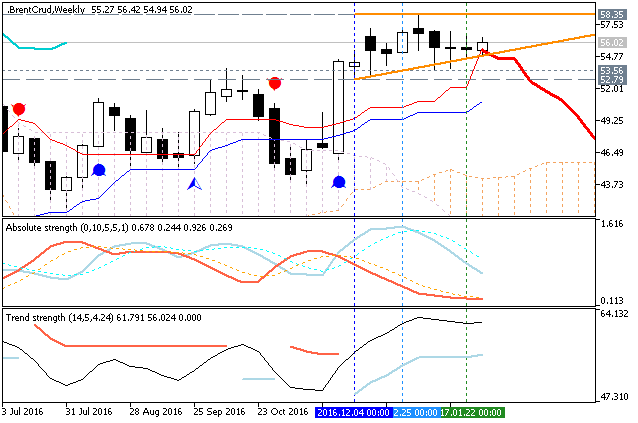 "Even though OPEC recently agreed to cut production, the “smart money” (the actual producers and end-users of crude oil) doesn’t seem to be buying it – or at least its impact on the total world crude oil supply. They may also be hedging against a ramp-up of U.S. oil production, which is one of President Trump’s main goals for the next four years. For now, traders should continue to monitor the “smart money’s” crude oil short position, how WTI and Brent crude oil act at their $30 – $40 support zones, and if the U.S. Dollar Index is able to regain its 100 resistance level or if it corrects even further."