Also, one minor detail in addition to the above: the descriptive enumerator (in "PATTERN_INDEX") must be placed after the "GARTLEY" enumerator. Mainly because the variables are translated into array locations where the first 36 are 4-point patterns and the rest 5-point patterns. This follows from the method:

BlueWhisper
1 comment
2019.05.23 23:33 2019.05.24 01:33:51 #52
I just downloaded MT5 and first thing I did was try out your harmonic indicator @Andre. The previous versions did not work (the fastzzz also sucked) but this version 3 is superb! Thank you. I am testing it now. Very happy. Lots of odd harmonic patterns I never heard of (nenstar, swan etc) but fortunately these can be disabled :)
Harmonic Trading Mt4 or Mt5 ; Price Patterns(Gartley,Butterfly,Bat,...)


The PRZ start (and end) denote the beginning and ending of what is referred to as the harmonic window in the code. Most patterns have 1-3 ratios concerning the D-point of the pattern, and the harmonic window starts when all these ratios are satisfied and ends when one ratio is no longer satisfied. Copy pasting from an earlier discussion on the matter:


Point D is an intersection in a set-theoretic sense, like the part which is common/shared between all zones. I've tried to illustrate using paint how this works on the Gartley, which have two ratios to be satisfied w.r.t. point D and the rest:

Therefore a valid point D is in the common part of the two zones above, shown as the green part in the figure. 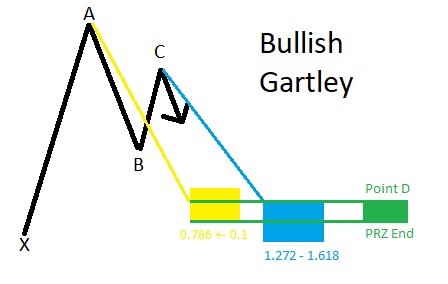 ...
The PRZ start is displayed, i.e. drawn on the chart as a small horizontal line-segment, as soon as it is discovered, generally as a projection. When/if price reaches this level the PRZ start line is removed and replaced by a PRZ end line. This latter line, which is a good measure for a stop loss, can also be seen in advance by double clicking the pattern.
Indicators: Harmonic Pattern Finder Harmonic Trading In which window is

i will take this errors when i want compile

Fantastic work, thanks a million for sharing your code!!

I was wondering if there is a way to display only the patterns that have reached a success rate higher than a given threshold without modifying the code?

How to code? Indicators with alerts/signal MACD indicator

I am really thankful of you for sharing this indicator. Its just awesome, finds very difficult patterns.

Can you create a MT4 version ? It will be very helpful for me.