Well it would also have needed to be placed in the correct folder replacing the old file, but great that it now works. You should know your feedback on the indicator is appreciated.

Many thanks for your work.....do you have a sheet that describes what each colour is? I see pink, sky blue etc...Many thanks

Many thanks for your work.....do you have a sheet that describes what each colour is? I see pink, sky blue etc...Many thanks 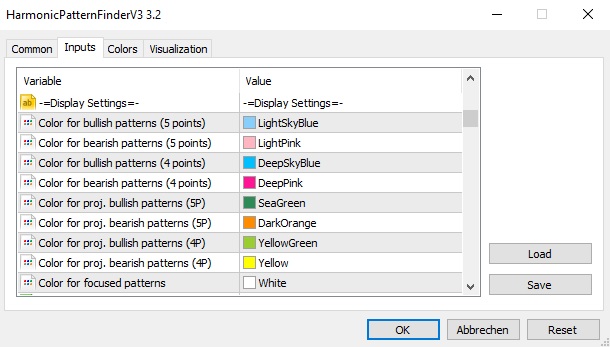 Colors can be adjusted in the settings, and differ depending on:

Thank you for your work, Andre!

Can you (or anyone who's currently using this 'harmonic pattern finder' to trade) talk about how you decide which pattern plotted on the chart by this indicator is tradable? I'm just curious about the thought process because right now the indicator draws so many patterns that I don't know which one to choose. Thank you!

Thank you for your work, Andre!

Can you (or anyone who's currently using this 'harmonic pattern finder' to trade) talk about how you decide which pattern plotted on the chart by this indicator is tradable? I'm just curious about the thought process because right now the indicator draws so many patterns that I don't know which one to choose. Thank you!

First let me state that I think the choice of which patterns to trade is an individual thing depending on the trader's skill level, trading objectives and frequency. There are online resources that can help, see e.g. this one (https://www.tradingwithrayner.com/5-problems-harmonic-trading/) for common pitfalls with harmonic trading. At the same time the "tradability" of a pattern is quite hard to formalize and specific pattern rules do apply. Generally speaking though there are two things I tend to look for in a pattern:

A strong X point means that it should be the bottom/top of a prior sizable move on the same scale as the traded pattern. So X points that are humps in an overarching trend are rejected - only the trend's starting point would be a valid X. The AB and CD legs should also have an approximately equal slope. The timezones that are drawn when double-clicking the pattern gives boundaries.

Furthermore the pattern context is also important for high probability reversals. Minor bullish patterns in an established range market ( i.e. not the first pattern) following a major bearish trend are perfect. Then I know investors are already buying and sellers have already sold. The fact that the market is ranging demonstrates its capability for producing the moves I'm looking for. As an example take a look at this highlighted butterfly pattern which I traded earlier this year:

This is actually a normal butterfly according to the "oldschool" definition allowing an XAD retracement in the 1.272 - 1.618 range (and not just 1.272). Apart from the strong X point and AB-CD slope-symmetry, the butterfly also had a nice lineup of ratios in the PRZ at 1.41 XAD and was complemented by an auxiliary 1.27 ABCD substructure there - which is a specific rule to the butterfly. It is also not the first bullish pattern to occur in the current trading range and the entry price is low both locally and in a more long-term context.

On the other hand, the 5-0 pattern that occured next was not traded by me. More skilled traders might have taken it, but I myself was too scared to trade a bearish pattern at long-term lows. If the price goes lower again there is a bullish crab not shown in the picture. Personally I don't consider that as tradable as the former butterfly due to mis-symmetry between the two triangles, but it might still be worth taking, pending further details.

The 5 Problems With Harmonic Trading And How You Can Fix It
Have you ever heard of trading patterns called Gartley, Butterfly, Bat or even Crab? If you did, then you probably come across harmonic trading as an approach to trading the markets. Like most traders, I was enticed by this trading approach because it allows me to predict turning points in the market, have a good risk to reward ratio and draw...
Gartley 222 Indicators: Harmonic Pattern Finder Harmonic Trading

Hi, Andre, first up thank you very much for your replies above! Just curious: would it be possible for you to post an MT4 version of this harmonic indicator? Thank you!