The recent spike in AUDUSD happened on muted volume, which favors prior trend. Combining the lack of volume on the terminal move in an addition to the following factors of sentiment and chart patterns. This article will guide you through what to look for on the chart while adding sentiment and volume analysis to see if the trend is ready to resume or rather a reversal is underway.

Technical analysis looks for potentially repeatable patterns that can provide an edge, so long as risk is managed. The chart above shows AUDUSD traced out a clean broadening pattern (diverging red trend lines), which communicates trend interruption more than trend reversal and often favors a new low is likely in a larger downtrend.

[USD - Unemployment Claims] = The number of individuals who filed for unemployment insurance for the first time during the past week. Although it's generally viewed as a lagging indicator, the number of unemployed people is an important signal of overall economic health because consumer spending is highly correlated with labor-market conditions. Unemployment is also a major consideration for those steering the country's monetary policy.

Cleaner positioning. "Equally, positioning metrics suggest that dollar longs have being pared back. A regression of currency manager index returns against the DXY now points to flat positioning, while the IMM shows a greater than 50% paring back in dollar longs," Deutsche Bank notes.

All about the Fed. "History has been all about the ECB, but the dominant driver of FX is now likely to be the Fed. On that front, monetary policy could come back in focus sooner than many expect," Deutsche Bank argues.

Euro still a good short. "While market focus is very likely to shift to the other side of the Atlantic, EUR/USD is still a good vehicle to express dollar longs. To start with, the euro is a consistent underperformer around Fed turning points," DB advises.

Appraising AUDUSD, USDJPY Breakouts with Fundamentals (based on dailyfx article)

Is USDJPY's massive breakout destined to extend its run or will it suffer the same fate as AUDUSD which saw its 0.79 breakout stall almost immediately? While many concern themselves only with the 'break' part of breakout scenarios, it is the follow through that determines whether there is a significant trading opportunity at hand. For AUDUSD, the 0.7900 break was a remarkable technical break from a period of extended consolidation; but its effort to generate traction contradicted the impact of an RBA rate cut. Further, monetary policy divergence between the Aussie and US Dollars provided a serious headwind to follow through. What does the fundamental backdrop look like for USDJPY moving forward? We discuss that in today's Strategy Video.

[NZD - NBNZ Business Confidence] = Level of a diffusion index based on surveyed manufacturers, builders, retailers, agricultural firms, and service providers. It's a leading indicator of economic health - businesses react quickly to market conditions, and changes in their sentiment can be an early signal of future economic activity such as spending, hiring, and investment. 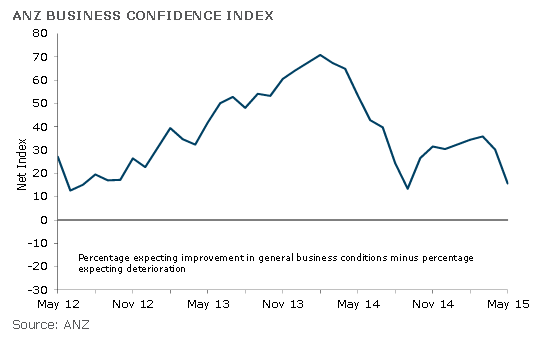 A marked downward revision in the preliminary 1Q U.S. Gross Domestic Product (GDP) report may drag on the greenback and spur a near-term rebound in EUR/USD as the Federal Reserve looks to carry its zero-interest rate policy into the second-half of 2015. 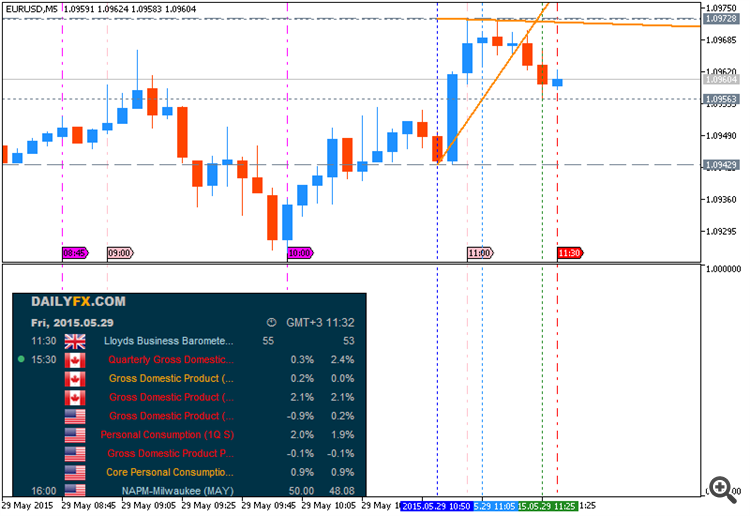 Even though the Fed pledges to look past the economic weakness drive by transitory factors, a larger-than-expected contraction in the growth rate may spur a further delay in the central bank’s normalization cycle as it undermines expectations for a stronger recovery.

Nevertheless, increased business outputs paired with the expansion in private-sector credit may offer a better-than-expected GDP print, and prospects for a stronger recovery may spur a bullish reaction in the dollar as the Fed remains on course to remove the zero-interest rate policy (ZIRP) in 2015. 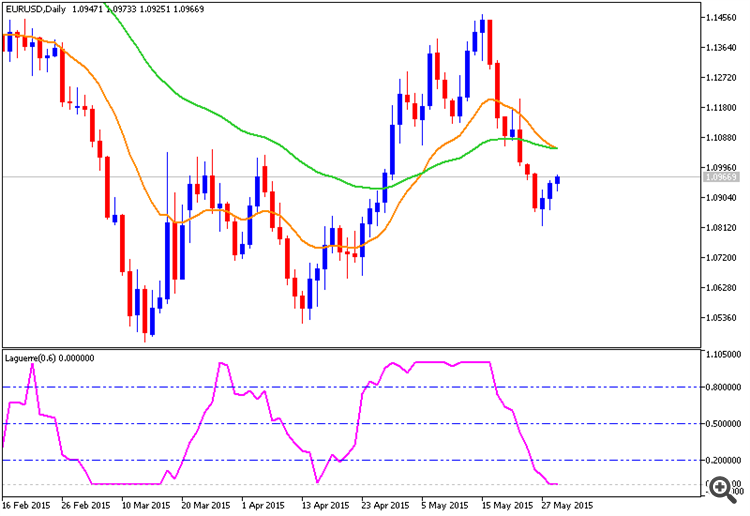 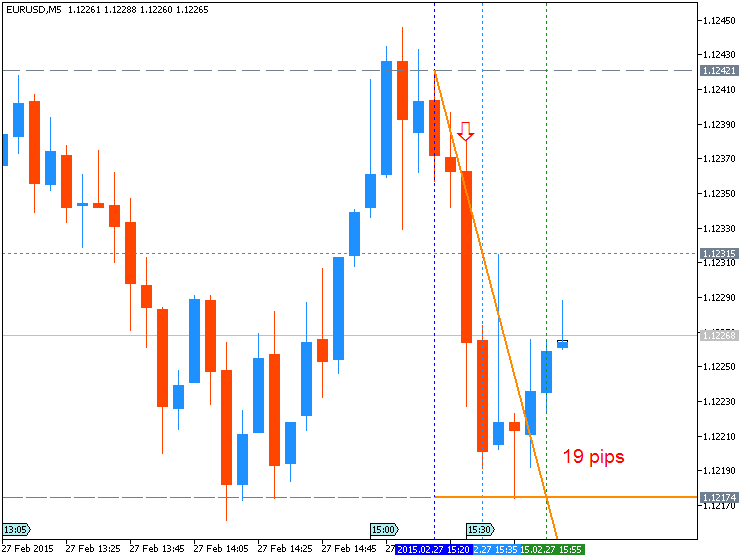 Even though the preliminary 4Q U.S. GDP print was revised down to an annualized 2.2% from an initial forecast of 2.6%, the print still managed to exceed market expectations for a 2.0% rate of growth. At the same time, Personal Consumption was also revised down to 4.2% from 4.3%, while the core Personal Consumption Expenditure (PCE) remained unchanged at 1.1% during the same period. The better-than-expected GDP reading may keep the Fed on course to normalize monetary policy in 2015 as the central bank anticipates a stronger recovery in the year ahead. The greenback strengthened following the report, with EUR/USD slipping below the 1.1200 handle to end the North American session at 1.1189.

ISM Manufacturing PMI, Rate decisions in Australia, the UK and the Eurozone, GDP data from Australia, Employment data from Canada as well as important labor figures from the US including the all-important NFP release. These are the highlights event on forex calendar.  Join us as we explore the market-movers of this week.

U.S. second GDP estimate was released, indicating the economy contracted 0.7% in the first quarter, amid harsh winter storms, strong dollar weighing on exports and labor disputes at West Coast ports. While the first estimate a month ago, showed 0.2% growth. Economists say the first quarter GDP reading is not accurate and expect a pick-up in the next quarter.  Also upbeat data in Durable goods orders and Consumer sentiment fuels optimism about US economic growth.

AUDIO - Income Generation with Darek Zelek (based on fxstreet article)

Traditional investment advisors point investors to the bond market to generate income, yet that is a dangerous undertaking in these markets. Master trader, Darek Zelek joins Merlin for a look at how he uses options to grow his portfolios and generate the desired rate of return he is looking for. The duo look at several examples of options trades on assets like Oil and Gold.

US Dollar Fundamentals (based on dailyfx article) 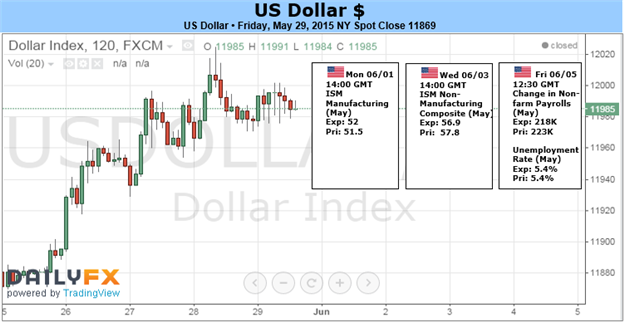 "Interest rate forecasting has proven the most tangible motivator for fundamental traders these past months, but it is not the only game in town for price and volatility. Risk trends should not be underestimated for its heavy influence over the market. Volatility measures in different capital markets look dangerous, but not as dangerous as equity indexes like the S&P 500 and Shanghai Composite. Meanwhile, the ‘relative’ factor to exchange rates should have us also looking at Greece, the RBA rate decision and other event risk that can buoy or crush the Dollar’s most liquid counterparts."