Forex technical analysis; EURUSD takes another run at support (based on forexlive article)

The 61.8% of the move up from the April low is being tested for the 4th time and has been broken.  The level came at the 1.08814.  Prior to the break, the line was test on 3 separate occasions.  Better US data (durable goods, S&P Case Schiller, new home sales, consumer confidence, Richmond Fed) has helped contribute.  The pair has a 113 pip trading range. The average is 141. So if the momentum can continue, there is room to roam. 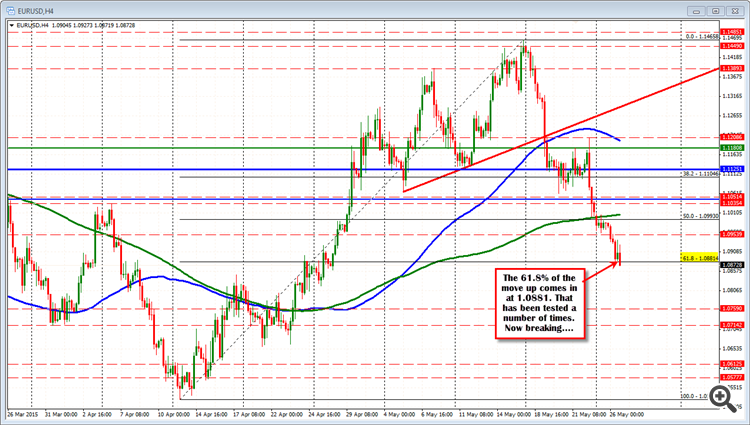 The 5 minute intraday activity in the NY session has not been a thing of beauty to be honest. Apart from the last push lower, traders seemed more intent on buying dips. Three successful test of the support target can do that to you.  This break is a chance for the market to shake the choppy cobwebs away.  The best case scenario would be to stay around the 1.0881-84 area, but already that is not happening (the price is back above that area). The next best thing for the shorts is to put up with a correction toward the 100 bar MA (blue line at 1.0905)/trend line (at 1.0911 currently). Both are moving lower. 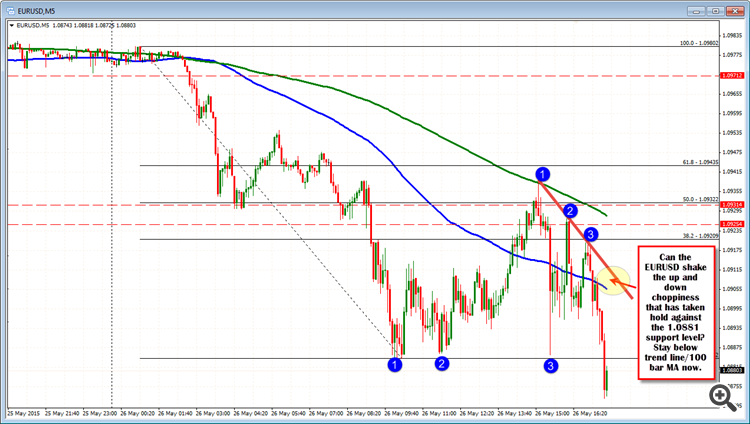 The following are the latest technical setups for EUR/USD, USD/JPY, GBP/USD, and AUD/USD as provided by the technical strategy team at Barclays Capital.

USD/JPY: The break above the 122.05 highs confirms our bullish view and completion of the six-month range trade. Our greater upside targets are in the 124.15 area.

GBP/USD: Last Friday’s bearish engulfing candle and the subsequent move through 1.5445 signals a squeeze lower towards our targets near 1.5335. Breaking below there would signal deeper setback towards 1.5130, the 50-dma.

AUD/USD: Last week’s bearish engulfing candle encourages our bearish view. A close below our initial downside targets near 0.7790 would signal lower towards 0.7680.

The strong selloff in EURUSD since the start of last week suggests that the long-term downtrend may be resuming after a sub-50% retracement in April and early May. Friday's big Bearish Engulfing Candle, along with the break back below key previous-resistance-turned-support at 1.1050, set the bearish tone heading into this week, and with rates peeking below the 61.8% Fibonacci retracement of the previous rally, more downside is possible this week. As for the secondary indicators, the MACD is about to cross below its '0' level, signaling a shift to outright bearish momentum, though the oversold Slow Stochastics hint at a pause or near-term bounce over the next few days.

Bringing all of the above together, it would not be surprising to see some near-term consolidation or a brief counter-trend rally in EURUSD this week, but as long as the pair remains below the 1.1000-50 zone and Greece's debt situation remains unresolved, traders will continue to sell first and ask questions later.

Cool Down: A Look At AUD/USD (adapted from seekingalpha article) 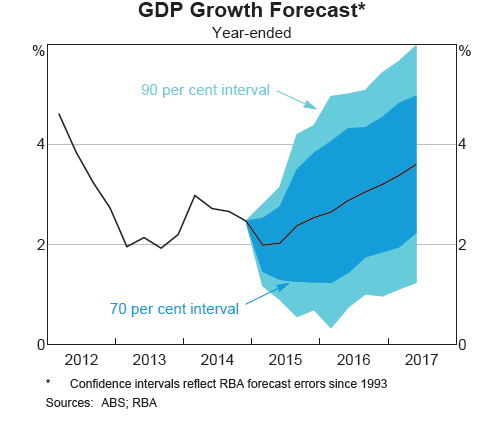 "With below trend growth, low inflation expectations and an accommodative monetary policy, it is difficult to see strengthening in AUD/USD. As a result the recent rally in AUD/USD should be shorted. Investors and traders without access to a forex account should consider to short FXA at current levels and exit the position when AUD/USD falls to 0.7635, a 2.51% return."

Cool Down: A Look At AUD/USD
AUD/USD heated up these past couple of months. However the FX pairs seems to be heading into a wet season, with the economy and inflation moving at a below trend pace. As such it is anticipated that AUD/USD will decline. Cool Down: A Look At AUD/USD I live in a tropical climate. There is no spring, summer, fall nor winter. Only the...
AUDUSD Technical Analysis 2015, AUD news AUD/USD

[CAD - Overnight Rate] = Interest rate at which major financial institutions borrow and lend overnight funds between themselves. Short term interest rates are the paramount factor in currency valuation - traders look at most other indicators merely to predict how rates will change in the future.

"The Bank of Canada today announced that it is maintaining its target for the overnight rate at 3/4 per cent. The Bank Rate is correspondingly 1 per cent and the deposit rate is 1/2 per cent.

Inflation in Canada continues to track the path outlined in the Bank’s April Monetary Policy Report (MPR). Total CPI inflation is near the bottom of the Bank's 1 to 3 per cent inflation control range, largely due to the transitory effects of sharply lower energy prices. Core inflation remains above 2 per cent, boosted by the pass-through effects of past depreciation of the Canadian dollar, as well as certain sector-specific factors. Seeing through the various temporary factors, the Bank estimates that the underlying trend of inflation is 1.6 to 1.8 per cent, consistent with persistent slack in the economy.

The outlook for the Canadian economy also remains largely in line with the April MPR. While a weak first quarter in the United States has raised questions about that economy’s underlying strength, the Bank expects a return to solid growth in the second quarter. This will help advance the rotation of demand in Canada toward more exports and business investment. Recent indicators suggest consumption in Canada is holding up relatively well, given the impact of lower oil prices on gross domestic income." 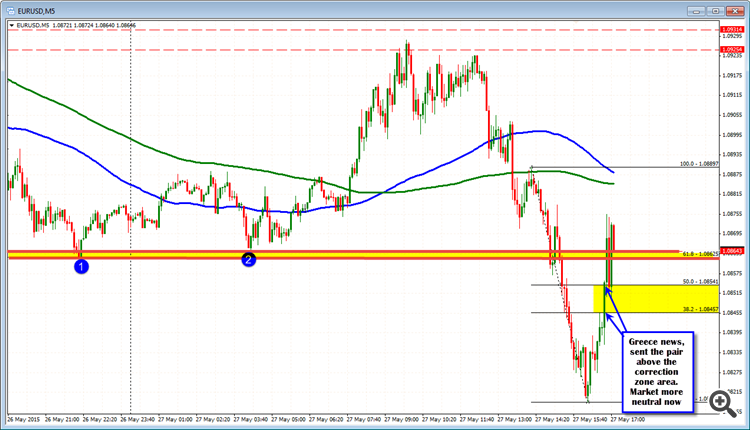 The news headlines on Greece led to a snap back move higher in the EURUSD (they can come at any time unfortunately).

Forex technical analysis: Greek headlines lead to snap back in EURUSD
The move took some of the wind out of the trend move lower seen in the NY session (started in the London session).   The move higher squeezed above the low from yesterday afternoon and the low from the Asian Pacific session.  It also moved above the 38.2-50% of the trend leg lower outlined in my last post.  The technical waters are now muddy. ...

The Australian Dollar softened against a host of other majors after central bank warnings resonated with investors. Reserve Bank of Australia (RBA) Deputy Governor Phillip Lowe spoke at a business conference this week and suggested that the markets should expect some extreme volatility if the Federal Reserve begins to increase borrowing costs. However, the weaker ‘Aussie’ would be favourable to the central bank which has made numerous attempts to jawbone the currency.

Lowe stated: "The Fed will raise rates when the US economy is strengthening… no doubt when the Fed raises interest rates, there will be some market turbulence, but this has been well telegraphed and people have had plenty of time to adjust. At some point when they raise interest rates, the US Dollar will probably strengthen against the Australian Dollar and, that is something we would welcome."
AUDUSD Technical Analysis 2015, Forex News (from InstaForex) What To Expect From

An upward revision in the U.K. 1Q Gross Domestic Product (GDP) print may heighten the appeal of the British Pound and spur a near-term rebound in GBP/USD as signs of a stronger recovery raises the Bank of England’s (BoE) scope to normalize monetary policy sooner rather than later. 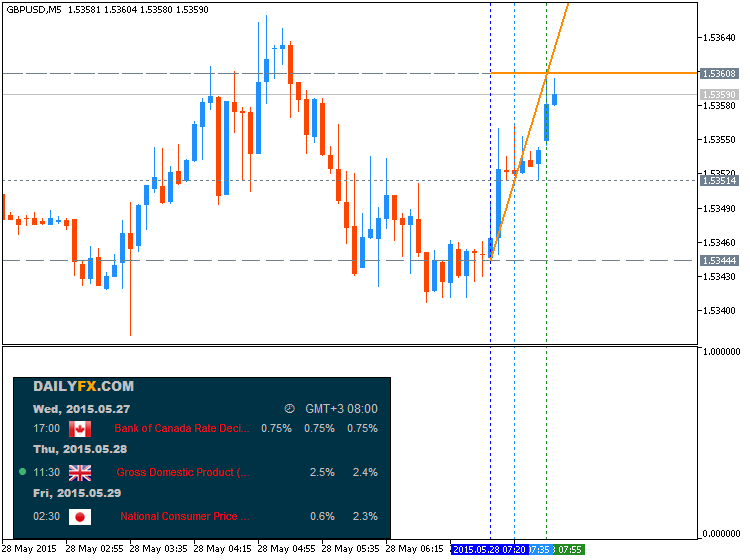 A marked uptick in the growth rate may spur a growing dissent within the Monetary Policy Committee (MPC) as the central bank remains on course to normalize monetary policy, and we may see a greater number of BoE officials prepare U.K. households and business for higher borrowing-costs as the economy gets on a firmer footing.

However, the widening trade deficit paired with the ongoing slack in private-sector activity may drag on the growth rate, and a dismal GDP figure may further delay the BoE’s normalization cycle especially on the back of the uncertainties clouding the outlook for fiscal policy. 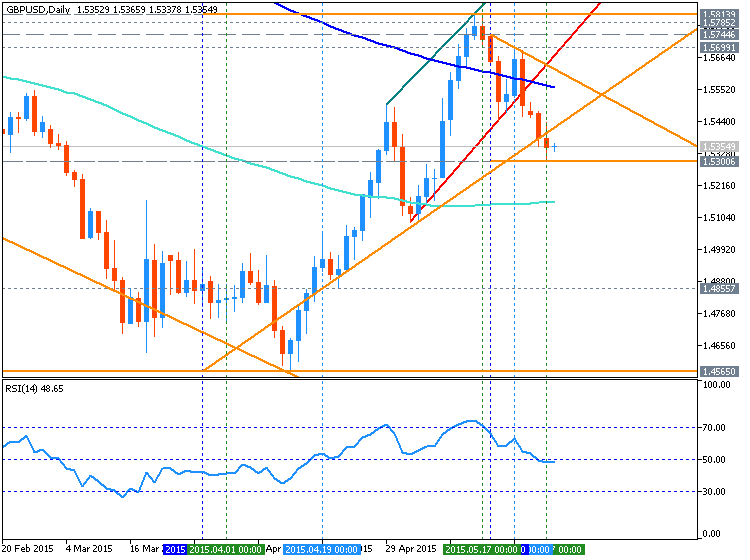 [AUD - Private Capital Expenditure] = Change in the total inflation-adjusted value of new capital expenditures made by private businesses. It's a leading indicator of economic health - businesses are quickly affected by market conditions, and changes in their investment levels can be an early signal of future economic activity such as hiring, spending, and earnings.

Goldman Sachs downside targets on EUR/USD  (based on forexlive article)

Phase I
"Following the ECB QE announcement on Jan. 22, EUR/USD settled around 1.14 for 5 weeks. On Feb. 26, higher-than-expected core CPI (for Jan.) caused EUR/$ to fall two big figures to 1.12. Subsequent days brought data that showed decent activity, ending with better-than-expected February payrolls on Mar. 6 and EUR/$ near 1.08. The start of ECB QE on Mar. 9 and associated curve flattening in the Euro zone took EUR/$ to 1.05 in the run-up to the March FOMC".

Phase II
"The March FOMC had all the makings of a Dollar-positive catalyst. In the wake of this meeting, USD appreciation ground to a halt, with EUR/$ cycling in a range from 1.05 - 1.10. An upbeat ECB press conference on Apr. 15, during which President Draghi emphasized the positive growth effects of QE, helped push EUR/$ to the top of this range by end-April".

"The weak first quarter GDP reading for the US on Apr. 29 began the unwind of the ECB QE trade, with EUR/$ and German Bund yields rising and the DAX falling on the day. Weak retail sales for April (May 13) raised fears that the Q2 growth rebound might be slow in coming, which were exacerbated by the surprise drop in consumer confidence for May (May 15). EUR/$ broke out of its 1.05 - 1.10 range and returned to its post-ECB QE level of 1.14, with broad Dollar weakness taking over against the majors".

"As a result, we are inclined to see the recent sell-off in the ECB QE trade as a temporary squeeze, albeit a painful one. It remains our expectation that fundamentals will pull EUR/$ lower, in line with our 12-month forecast of 0.95.  We expect the market to refocus on the European "growth crisis" in coming weeks, continuing to pull EUR/$ down".