In this article, we demonstrate an easy way to install MetaTrader 5 on popular Linux versions — Ubuntu and Debian. These systems are widely used on server hardware as well as on traders’ personal computers. 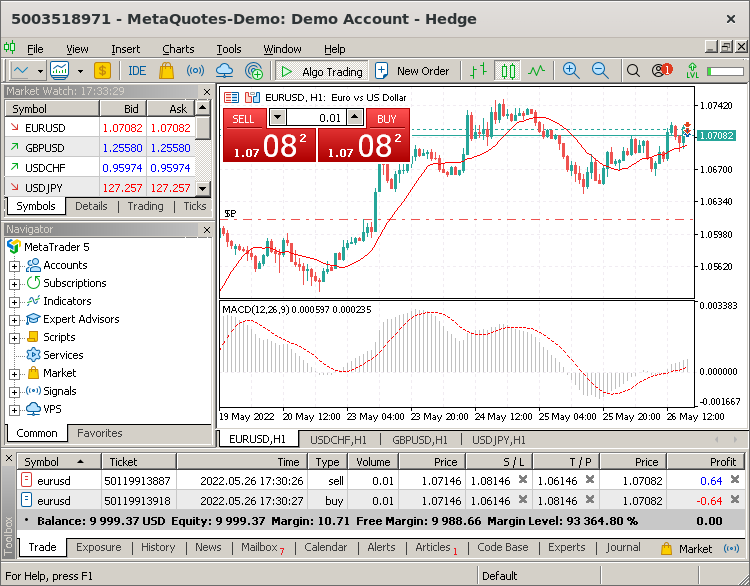 3707
My experience as an Ubuntu user says that it is often difficult to work comfortably in GNU/Linux systems with Windows software run via wine. As an alternative, you can also run a Windows virtual machine and then install Metatrader 5. I use VirtualBox.
Is metatrader on Linux Problem with mt4 in Looking for a trader

anyone has way to get Metatester agent working on Playforlinux?

have tried setting to winearch=win32

With Ubuntu 12.04 32bit I was able to install MT5 32bit with WINE 1.5.23. Rapid switching between timeframes on the same chart causes MT5 to crash but it is otherwise stable. As with previous commenter, Metatester does not work on linux.

I prefer running my VPS on linux because it is a much faster operating systerm (OS) than Windows Server which requires large memory/resouces.

Ok I understand that Metatrader has been designed for Windows but Windows is not the best operating system for a VPS. And a VPS is what you need to use the majority of EA's designed for MT5!

For a VPS, licensing issues etc make Windows desktop OS (eg. Windows XP, 7 , 8 etc) impractical. Windows Server is the Microsoft OS that some hosting providers will allow on a VPS if you want to run Metatrader but because Windows Server is designed to do a lot more (ie. it is a server not just a desktop interface) it uses huge amounts of resources on functions that are irrelevant for a VPS running a Metatrader EA. The result being Metatrader often runs very slow.

As such it would be great if the very clever people at Metaquotes could resolve the bugs that prevent Metatester working on linux. Thanks!

Get in touch with developers using Service Desk!
We therefore attach great importance to all user reports about issues in our programs and try to answer each one of them.
Discussion of article "Forex does mt4 run on Is metatrader on Linux

149
I loving trading using ubuntu/linux... it is more safe from malware and i can stay away from any attack from outside....... 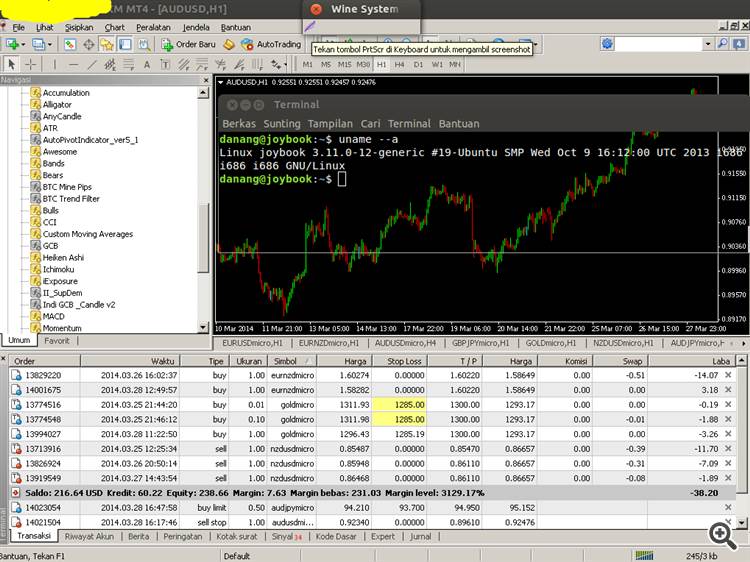 I have run MT4 and MT5 on Linux using Wine and VirtualBox, all on CentOS 6.5.  The benefit, as I see it, of using CentOS is that it mirrors RedHat Enterprise Linux, and each release has a longer support life than other distributions.  I use Ubuntu, but that is for home and multimedia applications, to which it is well suited.  CentOS is much more a corporate style operating system; few frills.

Using Wine, I have found the installation to be easy, and the tester works fine.

Using VirtualBox is equally easy, but there is a small performance degradation, and therefore I like to use Wine.  This is especially noticeable when running optimisations.

Highly recommend it.  Can't understand why Metaquotes hasn't provided a native port to Linux, especially after all the recent revelations of spying in Windows 8!

Solved: "Expression could not be evaluated"

Thanks from me too. Had the luck to stumble upon this page ;-)

But though it works fine when I use it on indicators containing "void OnStart()", I don't have any success with one, only having "OnCalculate", explicitly Stochastic.mq4.

Is there anything, I can change there to enable watching expressions?


Thanks from me too. Had the luck to stumble upon this page ;-)

But though it works fine when I use it on indicators containing "void OnStart()", I don't have any success with one, only having "OnCalculate", explicitly Stochastic.mq4.

Is there anything, I can change there to enable watching expressions?