This article provides further description of the walk-forward optimization in the MetaTrader 5 terminal. In previous articles, we considered methods for generating and filtering the optimization report and started analyzing the internal structure of the application responsible for the optimization process. The Auto Optimizer is implemented as a C# application and it has its own graphical interface. The fifth article is devoted to the creation of this graphical interface.

Let's move on to the graphical interface. Earlier, we considered a method for creating an add-on for the MetaTrader 5 in the C# language and ways of combining its functions with an Expert Advisor by using a DLL and the OnTimer callback. In the current implementation, the auto optimizer will be implemented outside the terminal. Now it runs as an external optimizations manager and imitates the work of a trader who launches optimizations and processes the results. Furthermore, by avoiding simultaneous optimizations in several terminals running on the same computer and by implementing the auto optimizer as a separate application, we can access absolutely all terminals that are installed on the computer, including the computer on which the optimizer is running. This computer could not be used in the previous project.

That is why the current project is not implemented entirely as a DLL, but it is now divided into a DLL and an executable file of the auto optimizer project. 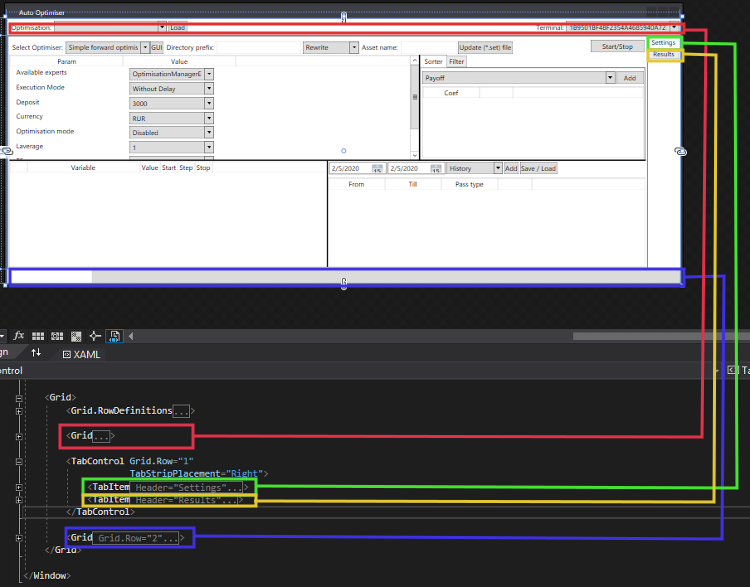 As can be seen from the above screenshot, the project window consists of a Header, a Footer, and a TabControl with two tabs: Settings and Reports. The header part and the footer of the window are not changed, no matter which tab is selected in the central part, providing easy access to all control elements located in these parts.

Hi Andrey, I enjoyed reading your articles about Auto-optimzation.
I sent you a PM with an opportunity that you might be interested.