The following trading system is very good for the intraday as well as the long term trader... It will work on any timeframe and any pair. But I suggest you do not use it on any timeframe below the 15-minute timeframe as you will be getting many fake signals.

When we work with a indicators on a system, the most common problem we all face is the late-entries... That is, when the indicators give a trading signal, the price has already moved quite a few pips, and these pips, we could have catch them as well. Now the other problem regarding late entries in trades is the stoploss, since most of the time, we will be placing stoploss at recent swings (high or low), with late entries, these swings are further from the entry therefore when we place the stoploss so far from the actual late entries, we are decreasing the Risk/Reward ratio thus turning a whole trading system into a Poor Risk Reward system... You could be risking 2x to earn 1x and so on... this will never work in the long run and you would eventually go broke.

The Bounce20 system is here to fix this late entry problem, infact the aim of this system is to catch a trend/mini trend as early as possible. These pips which we would have missed with other trading systems due to late entries, we can definitely book them now with the bounce20 method.

So let us look into this system in detail please:

2. Place MACD indicator on the chart with the default setting.

Now your chart should be looking nice and uncluttered with only these 3 indicators. Let us look into the mechanics of this system.

The procedure to determine a buy signal from the Bounce20 trading system are as follows:

1. MACD should be below 0 and MACD Histogram should be moving away (retreating) from MACD Signal line (red)

The above rule are the main ones which gives you the earliest warning about a possible trade forming. However, do not take any trade now itself because there comes the other rules

2. Price should be trying to go UP by now, but it normally BOUNCES off the SMA20 (blue)... we should look for this bounce

3. The last rule is, after the bounce price should normally go little below the SMA5(red) and a bar might close below it.

Do not get confused. Follow the rules closely and you will be out of trouble. Look at the screenshots below for further detail on this trading setup. I have also numbered the steps and this is how you should be numbering yours as well.

I have already explained the buy setup in detail, therefore I would not be doing the same for explaining the sell situation as it is exactly the opposite of the Buy Setup. Just observe this perfect SELL setup below and I will write a little about it after the screenshot.

The procedure to determine a SELL signal from the Bounce20 trading system are as follows:

1. MACD should be ABOVE 0 and MACD Histogram should be moving away (retreating) from MACD Signal line (red)

2. Price should be trying to go DOWN by now, but it normally BOUNCES off the SMA20 (yellow)... we should look for this bounce

3. The last rule is, after the bounce price should normally go little below the SMA5(blue) and a bar might close below it.

In the screenshot above, I have detailed and illustrated a perfect SELL setup and if you had taken this one, it would have made many pips. I suggest you read the rules again and follow the steps on this screenshot altogether. Our entry should be either at a close above the SMA 5(blue) or if it makes a shoot above the SMA 5, we can also open an entry because there are times when price will just go briefly above the SMA5 and then immediately go in the down direction, if in that case you were waiting for a close below the SMA5, you would have miss the trade.

What about Stoploss and Takeprofit

The takeprofit should be reasonable, you can use the next resistance as takeprofit level for a buy and the next support level for a sell. Breakeven your trade as soon as you can. After than you can ride the trade and see how much you can make from it. The trades taken with this system will usually give you a lot of pips.

Now let me show you more examples of BUY signals generated by the bounce20 trading system... I will be labeling the screenshot as above and will also add the stoploss and possible takeprofit levels. 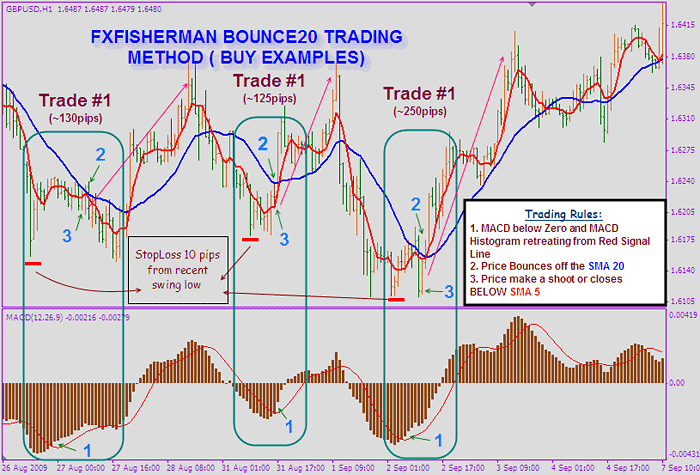 3 successful buy trade signals generated by the Bounce20 Trading Method netting around 500pips altogether... Is not this great?? You should study the chart posted above and read the rules again and again. You can notice how our stoploss is tight when compared to the profit made (expected) from this trading method. This is a Low Risk High Reward system. Even a beginner in forex can learn this system overnight. But again, no system is perfect and we should have a few losses here and then... but again, our losses will be minimal when compared to the profit potential.

I will pen off for now... When I come back, I will write about the Sell details... Have fun and hope to hear from you.

Hellox Bossxero, this looks very interesting. When do you plan to tell about the sell seup? I am looking for a manual strategy as add on to my EA trading.

Nice system. Bounce off Moving Averages is a strong trading signal that is profitable to trade. However when I trade bounces, the bounce itself is the signal. At your system the MACD signals signal and bounce is merely a confirmation. Seems a bit of a contradiction.

Thanks for posting... The Sell setup is just the opposite of the buy.

1. MACD should be above 0 and MACD histogram should start retreating from the signal line.

2. Price should start moving down (candlesticks) but will eventually bounce on the SMA20.

Settings regarding stoploss etc are the same.

On Methods to Detect 10points 3.mq4 Martingale with SMA21

[Deleted] 2009.09.21 03:01 2009.09.21 05:01:07 #4
AutoTrader2:
Nice system. Bounce off Moving Averages is a strong trading signal that is profitable to trade. However when I trade bounces, the bounce itself is the signal. At your system the MACD signals signal and bounce is merely a confirmation. Seems a bit of a contradiction.

The system is designed to catch a reversal a ride the wave. What you are describing is trading an already established trend. This method and your method has only the name on common but the objective is different.

i private message you..need your advice..

is the system working still ?

A million thanks for this strategy. I would try it out and post my comments here.

this simple system take after chart done... how to sure this chart can enter

First, FXFisherman, thanks for sharing your system!!!

Then, thanks for all the comments, but forgive me, most of them are halleluia comments, without even have tried it. Please come with solid comments and produce results!