Bitcoin Set For A Restart

t’s been 6 difficult months for (Bitcoin), most notably due to the leading exchange’s collapse, MtGox. Bitcoin collapsed down to $350 from the highs of $1,150 and is currently trading for $570 at Bitstamp. Will the recent rise help the real Bitcoin stand up?

Price manipulation is suggested as one of the reasons for the extreme rise in 2013. A report puts the $1,200 bitcoin price to MtGox fraud, although other factors certainly affected its price. As all that is now history, this month Bitcoin regained trust and is back on track for yet another uptrend (?). And this time, lessons have been learned.

So, Bitcoin is set for a restart (as I shared at TradingView last week). At that time, Bitcoin had just had the first day of demand spiking, while the price had cleared off the downward trend line. At the time of writing these words, Bitcoin is up 16% since then. 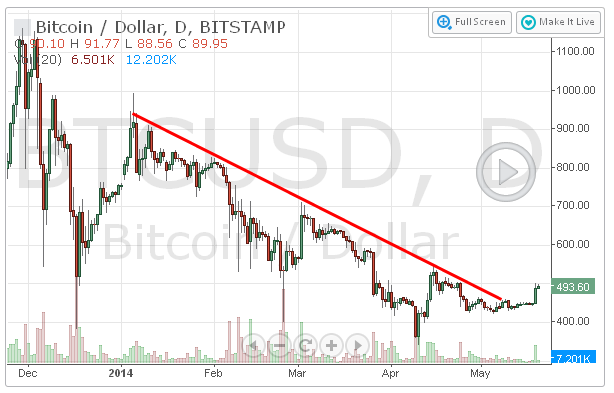 Price manipulation is suggested as one of the reasons for the extreme rise in 2013. A report puts the $1,200 bitcoin price to MtGox fraud, although other factors certainly affected its price. As all that is now history, this month Bitcoin regained trust and is back on track for yet another uptrend (?). And this time, lessons have been learned.

So, Bitcoin is set for a restart (as I shared at TradingView last week). At that time, Bitcoin had just had the first day of demand spiking, while the price had cleared off the downward trend line. At the time of writing these words, Bitcoin is up 16% since then.

Price was manipulated by the owners

They will keep it open as long as they are allowed to launder money anonymously using bitcoin. And small ones are going the get s... again

Why Bitcoin’s Price Has Leapt 64% Since April

Bitcoin’s price has been on a roll of late.

The CoinDesk Bitcoin Price Index (BPI) recently crossed back above $590 on the 27th of May, representing a 64% gain from 10th April when the price was as low as $360.

Much of this dramatic price increase has come in just the last few days. For approximately a one-month period prior to 19th May, bitcoin was trading in a relatively tight band around the $450 level. Then, on that date, the price began to steadily ratchet upwards (see Figure 1). 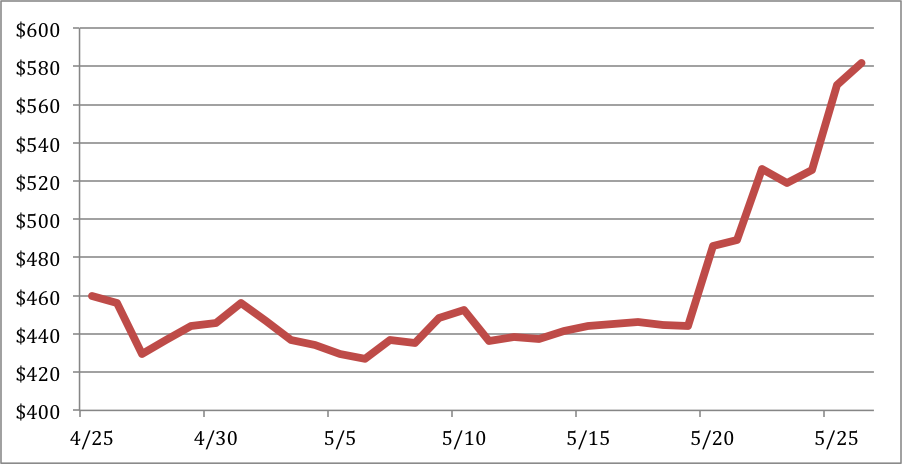 Two algorithms, named Willy and Markus, bought around 650,000 bitcoins in the dying days of the bitcoin exchange, a new report alleges.

Bitcoin prices were being manipulated in late 2013 by a pair of autonomous computer programs running on bitcoin exchange MtGox, according to an anonymously published report.

The programs, named Willy and Markus, allegedly pushed prices up to $1,000 before the bubble burst after MtGox's collapse in late February.

The report's author alleges that some of the trades were coming from inside the exchange itself. "In fact," the report says, "there is a ton of evidence to suggest that all of these accounts were controlled by MtGox themselves."

The so-called Willy Report uses leaked logs of activity on the now closed bitcoin exchange to analyse the behaviour of the Willy trading algorithm, which users had noticed in December 2013. The robot bought small amounts of bitcoin at regular intervals for months, but until the logs were leaked in March, no-one could work out why.

The report's author tracked down all the "Willy" trades, looking for accounts making 10-20 bitcoin transactions every five minutes, and found that $112m had been spent to buy more than 250,000 bitcoin in the course of November.

"So if you were wondering how Bitcoin suddenly appreciated in value by a factor of 10 within the span of one month, well, this may be why," the writer adds. Bitcoin's value went from around $200 at the start of November 2013 to a peak of $1,132 by the start of December – at which point the price collapsed. It stood at about $570 on Wednesday.

But following the trail further back reveals a second bot, which the author names "Markus". That bot operated in a less elegant way. "First, its fees paid were always zero (unlike Willy, who paid fees as usual). Second, its fiat [non-bitcoin money] spent when buying coins was all over the place, with seemingly completely random prices paid per bitcoin."

The author suggests that the "Markus" bot, rather than spending random prices per bitcoin, in fact acquired the coins for free, "and the program that generates the trading logs simply takes whatever value was already there before. In other words, Markus is somehow buying tons of BTC without spending a dime."

The total amount of bitcoin that the log shows was bought by Markus and Willy up to the end of November, when the logs end, is 570,000 bitcoin - equivalent to $379m on the average price of bitcoin during the month.

But the author also say that Willy was "active for the most part of December until the end of January as well. Although this was at a slower, more consistent pace (around 2,000 BTC per day), it should roughly add up to another 80,000 BTC or so bought."

Add that to the total, and it hits 650,000 bitcoin – the amount MtGox said it had lost to hackers when it closed its doors.

But the author points to an interesting quirk in the data: The Willy trades continued to be executed even when the MtGox site went down. In January, over the course of half an hour when the site was offline, four trades were executed that bore the hallmark of the bot. "At a time no one else was able to trade, be it via API or otherwise, Willy was somehow able to continue as if nothing ever happened," says the author.

A few days after the report was made public, Wordpress, the blogging platform which hosted the site, took it down, citing a violation of its terms of service. But when Automattic, Wordpress' parent company, was asked by the Guardian what rules were broken, it instead put the site back up.

Whether or not MtGox was directly involved, the actions of the trading algorithms seems to have had a strong effect on bitcoin prices. The value of the cryptocurrency peaked around the same time activity on the Willy bot did, in early December – and then fell to less than half that.

MtGox's executors did not respond to a request for comment by the time of publication. Its former chief executive Mark Karpeles could not be contacted.

As I told : they stole from us. Isn't that obvious by now?

Bitcoin is ripe for fraud and Ponzi schemes, warns SEC

The US Securities and Exchange Commission issued an advisory Wednesday that warned investors to be wary of Bitcoin or other virtual-currency related investments.

While not advising investors to avoid Bitcoin altogether, the financial regulator did caution investors by saying the cryptocurrency is uninsured, unregulated, and volatile. But the SEC's chief concern was the risk of fraud.

"A new product, technology, or innovation -- such as Bitcoin -- has the potential to give rise to both frauds and high-risk investment opportunities," the agency's notice says. "Potential investors can be easily enticed with the promise of high returns in a new investment space and also may be less skeptical when assessing something novel, new and cutting-edge."

The government agency also pointed to another investor alert (PDF) it issued, which outlines the risks of Bitcoin in the context of Ponzi schemes. The SEC said that Ponzi scheme organizers often use the newest tech innovations for their scams.

Additionally, the SEC said that investors who were able to cash in when the Bitcoin market was soaring are now more susceptible to being taking advantage of because of their unexpected increase in wealth. They are "attractive targets for fraudsters" and "promoters of high-risk investment opportunities," the SEC said.

Hello.Prompt please Forex broker who offers on a demo the account Bitcoin.

There are quite a few already, but look for bitcoin in CFDs not in forex symbols (bitcoin is not a regulated currency)

Just don't try to own those. And there is still a question with what are the brokers going to guarantee your positions in cases like MtGox