It sometimes goes higher (600ish) but, on average, it is declining

Guys, don't rush with bitcoin. Sooner or later it (or something named differently but with the same essence) will be forced on us and then we shall regret the day when it was invented

Bitcoin prices traded near the lowest level since April on Monday, amid concerns about possible regulation of the virtual currency.

According to the CoinDesk Bitcoin Price Index, which averages prices from the major exchanges, prices of the crypto-currency inched up 1.04% to trade at $400.68.

New York's Department of Financial Services proposed a BitLicense on July 17. As per the proposal, firms would have to obtain a license to engage in the virtual currency business.

Some market analysts have expressed concerns over the proposal, saying increased regulation would pressurize the Bitcoin industry.

The FTC's complaint against Butterfly and its corporate officers alleges that the company charged consumers thousands of dollars for its bitcoin computers, called BitForce, but then failed to ship the computers until they were almost obsolete, or in many cases did not provide the computers at all.

In an emailed statement on Tuesday, Butterfly Labs said the commission had overreached with "heavy-handed actions."

"In a rush to judgment, the FTC has acted as judge, jury and executioner, contrary to our intended system of governmental checks and balances," the company said. "It appears the FTC has decided to go to war on bitcoin overall, and is starting with Butterfly Labs."

Unlike traditional currency, bitcoins are not distributed by a central bank or backed by physical assets like gold, but are "mined" by users who use computers to calculate increasingly complex algorithmic formulas.

When a user solves a formula, the bitcoin system awards that user a set number of bitcoins. As time passes and more bitcoins are mined, mining becomes more difficult. The codes become more complex and require more powerful computers to solve them.

"We often see that when a new and little-understood opportunity like Bitcoin presents itself, scammers will find ways to capitalize on the public's excitement and interest," Jessica Rich, director of the FTC's Bureau of Consumer Protection, said on Tuesday.

Butterfly sold its computers from $149 to $29,899 based on the machines' purported computing power. The FTC said that more than 20,000 consumers had not received the computers they purchased as of September 2013.

A more powerful computer, the Monarch, was launched in August 2013 for sale between $2,499 and $4,680, but few of the machines had been delivered, the FTC said.

"Butterfly Labs was literally in the midst of shipping out completed products to fulfill the remaining millions of dollars of orders on our books and issuing requested refunds," the company said.

The court's preliminary ban on Butterfly Labs will be considered at a hearing scheduled for Monday.

HFT Stock Manipulation In Forecast and levels for Forex News

Paypal is teaming up with three major Bitcoin payment processors so that certain retailers will be able to receive payments in the virtual currency via the firm's payment hub.

The three processors are BitPay, Coinbase and GoCoin.

The service has gone live and will initially be available to sellers of digital goods based in North America.

However, the payments will not be processed by Paypal itself, the company confirmed.

"We're proceeding gradually, supporting Bitcoin in some ways today and holding off on other ways until we see how things develop," wrote Scott Ellison, senior director of corporate strategy in a blog post on the Paypal website.

"Paypal has always embraced innovation, but always in ways that make payments safer and more reliable for our customers. Our approach to Bitcoin is no different."

Last month Paypal announced that its subsidiary unit Braintree, a payment processor used by firms such as Uber and Airbnb, was also looking at ways to handle Bitcoin payments.

"I think we will look back at this announcement from Paypal as being a major turning point in the mainstream adoption both of Bitcoin and its payment system being taken seriously by businesses," he told the BBC.

How to fix my PayPal support appears on MetaTrader 5: More Opportunities

Hello sir, how many dollar of its fee if we change from paypal to bitcoint??

The United States military is studying digital currencies like bitcoin to learn if they can be traced and to figure out how they are used by America's adversaries around the world.

CNBC has learned that the global policy counsel of the Bitcoin Foundation flew to Florida to meet with officials from U.S. Special Operations Command for a daylong discussion Monday on the role of so-called cryptocurrencies—of which bitcoin is the best known—in illicit finance.

The first-of-its-kind discussion came just as U.S. warplanes began flying missions over Syria in President Barack Obama's effort to check the advance of the Islamic terror network ISIS. A key priority for the U.S. military is stopping the flow of money to ISIS fighters and blocking the network's ability to process profits from kidnapping, extortion and illicit oil sales.

The military's interest in virtual currency is part of an overall effort by special operations forces to understand how their enemies finance themselves, and what intelligence special operators can glean by following the illicit money.

"We're trying to do our best to understand the true scope of the threat that we are dealing with," said a defense official who attended the meeting. "We have to fully understand all of the components and functions of the adversary across the globe—not just in Syria and Iraq—and the manner in which those adversaries raise, hide and move money."

Defense officials said ISIS is part of a global dark network on the Internet that is involved in the use of virtual currency—although ISIS itself is "principally funded through means other than virtual currency."

The invitation-only event, called simply the "Virtual Currency Workshop," was held at an office building in downtown Tampa near MacDill Air Force Base where Special Operations Command is based, and it included a meet-and-greet cocktail party at the Marriott Waterside Hotel & Marina on Sunday evening.

It was organized by a little-known but highly influential group called Business Executives for National Security, which facilitates connections between American business leaders and the U.S. military.

The group's members include a who's who of America's corporate and financial elite, according to its website, including Jeff Bezos of Amazon, former AIG CEO Hank Greenberg and David Koch of Koch Industries.

Why are there differences How does a broker Binary Options Articles

Bitcoin prices consolidate below the $400-level

Bitcoin prices consolidated below the key $400-level on Wednesday, as speculators awaited next catalyst to influence price direction.

BitStamp prices fell to a five-month low of $366.71 on September 29 as concerns about possible regulation of the virtual currency weighed.

According to the CoinDesk Bitcoin Price Index, which averages prices from the major exchanges, prices of the crypto-currency inched down 0.53% to trade at $384.23.

Bitcoin prices stumbled towards the key $300-level on Sunday, as bearish chart signals and concerns about possible regulation of the virtual currency weighed.

According to the CoinDesk Bitcoin Price Index, which averages prices from the major exchanges, prices of the crypto-currency sank 5.19% to trade at $308.60.

Beginning Of The End For Bitcoin?

In an eventful weekend for (Bitcoin), the price action fell sharply to a low of $275, losing 8.71% on Saturday and 1.8% on Sunday. Ahead of the U.S. market's open on Monday, though, the price has rebounded to $316, posting a gain of 1.12% in the past 24 hours. The price has broken above the daily pivot point and could tend towards the first daily resistance level at $350.30. On the downside, support lies at $285.87 today. The large downward price movement has been attributed to a single trader (or group of traders) deliberately dumping Bitcoin on exchange to supress the price and also the stronger US Dollar, due to stronger than expected jobs data from the US.

On Friday, the Russian Finance ministry released the full version of a draft bill that would ban the creation and distribution of software that act as alternatives to fiat money, such as Bitcoin and other crypto-currencies. Individuals who are found to issue crypto-currencies will be hit with fines of around $1,000, with increasing fines for officials and legal entities. Enforcement of these fines are unclear as purchase and use of Bitcoin can be made anonymous using the right methods. On a slightly less negative tone, the central bank of Portugal has issued a warning to its citizens that engaging in Bitcoin investments is risky and not backed by the government. The central bank has highlighted some of the dangers involved in the Bitcoin space, but has not completely outright taken a negative stance such as the Russian government has.

An online trading platform based in Singapore will now offer investment banking products related to Bitcoin. Coinarch offers derivative products based on the value of Bitcoin, allowing potential investors to bet on the fall or rise of the price of Bitcoin and Coinarch provides leverage up to 800%. Also, interest can be earned on Bitcoins held if the market remains relatively stable, with interest rates of up to 50% for customers. The arrival of such investment products for Bitcoin indicates that the market is maturing and hedging activities are becoming easier for investors.

The 4 hour chart for the BitStamp exchange is shown below. The price action is currently just below the 76.4% Fibonacci retracement from the high reached in winter 2013, which could suggest that the price will continue to fluctuate around this value before entering a new uptrend again. The chart below shows that the MACD could make an upward cross, indicating the start of an uptrend. Also, the relative strength index is approaching 50, currently at 41.23. If the index surpasses 50, this will act as further confirmation of an imminent upward move. 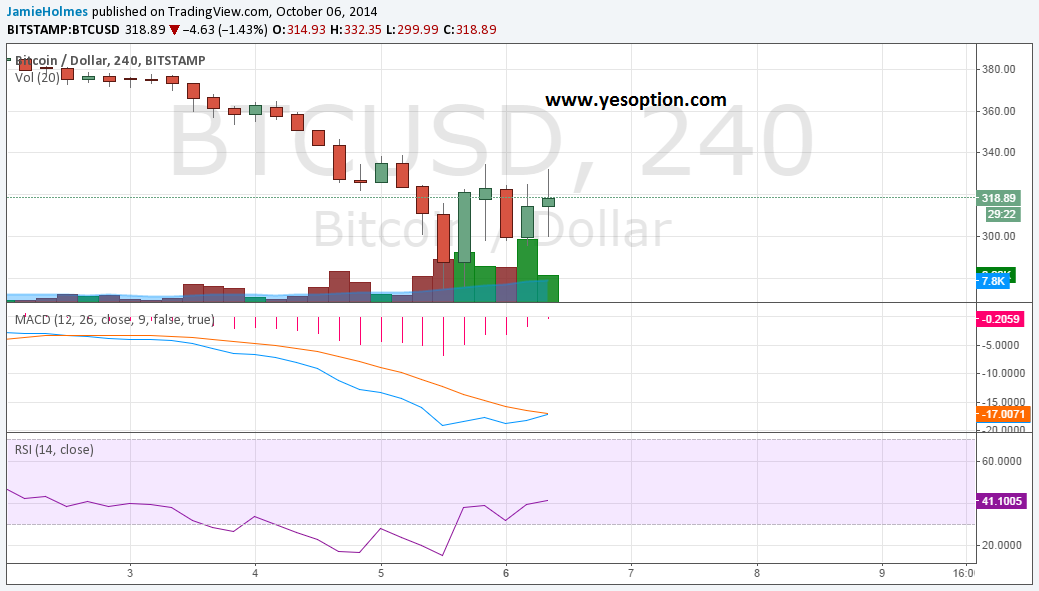