Today the Securities and Exchange Commission shut down a bitcoin investing scam that, as bitcoin investing scams go, is disappointingly un-scammy. A very bitcoiny guy named Erik Voorhees1 started some very bitcoiny companies called SatoshiDICE and FeedZeBirds,2 and he sold shares in those companies, for bitcoins, over the internet. He called these sales initial public offerings, and published homemade prospectuses for them on the Internet,3 but he forgot to register them with the SEC.

That's relatively small potatoes because, from the SEC order, he doesn't seem to be a particularly bad guy. Voorhees initially IPOed SatoshiDICE in August 2012, ultimately selling 13 percent of the company for 50,600 bitcoins worth about $700,000.4 In July 2013, Voorhees sold SatoshiDICE for $12.4 million, and after announcing the pending sale went and bought back all of those shares for 45,500 bitcoins worth about $3.8 million. So his investors, in the aggregate, made a 400+ percent return in less than a year.

Wait no did I do that right? Or did they lose 10 percent in less than a year? I mean, in aggregate, they invested 50,600 bitcoins and got back 45,500, for about a 10 percent loss in bitcoins. But also, in aggregate, they invested 700,000 American dollars and got back 3,800,000 of them, for about a 437 percent return in American dollars. So I guess they're not complaining? Or maybe they are, I have no idea. I gather that complaining is a thing that bitcoin investors sometimes do.

FeedZeBirds was listed on the Global Bitcoin Stock Exchange, which was run by a man with the confidence-inspiring online nickname "Nefario." The SEC drily points out that the GBSE "ceased operations" in October 2012. From my casual perusal, FeedZeBirds does not seem like a particularly vibrant business these days either.

And the law on this is really simple and clear: If someone sells you a security in an illegally unregistered offering, you are entitled "to recover the consideration paid for such security with interest thereon."7 So the people who bought those 30,000 shares of FeedZeBirds are entitled to get their ...

But why would FeedZeBirds investors want grubby fiat dollars back? They didn't pay 15,000 American dollars for their FeedZeBirds shares. They paid 2,600 glorious bitcoins for those shares.8 They should demand back those 2,600 bitcoins -- worth about $1.75 million today9 -- plus interest.

I have no idea whether they'd get them back.10 A few casual conversations with securities lawyers did not unearth any bitcoin-disgorgement expertise. But if regulators are going to go after bitcoin scams, eventually someone is going to have to answer this question: If you get scammed out of bitcoins, are you only entitled to the dollar value of the bitcoins at the time you were scammed out of them? Or can you actually get your bitcoins back? You know, like as if they were actually currency?

Trading Systems: Research of Is there a profitable Do stop-loss orders actually

John Donahoe, president and CEO of eBay Inc. was talking about his company’s future with digital currencies on CNBC. In the interview, he once again offered positive words about the future of technological advancements in money.

‘I think there’s no doubt digital currency is going to play an important role going forward, and at PayPal, we’re going to have to integrate digital currencies into our wallet.’

Ebay’s outlook has been positive, yet cautious and hesitant. In order for eBay to integrate Bitcoin may take a lot of changes and that may be the reason for the slow progress in comparison to TigerDirect, Overstock, and now the biggest company to accept Bitcoin, Dish Network.

‘I can’t give a specific time, but I think you’ll see bitcoin used in different use cases, whether it’s a peer-to-peer use case, a cross-border transaction – someone’s sending currency to someone else, and over time, you’ll start to see it with some merchants accepting bitcoin.’

In the past, eBay has been consistent in providing a solid platform for merchants for around the world and in 2011, they filed for a patent to accept ‘virtual currencies.‘ In April, eBay began opening up categories for Virtual Currencies as well. Offering a chance for international markets to integrate Bitcoin would be a huge boon to merchants, customers and eBay.

“What ebay represents is opportunity for small sellers. [...] eBay, from its very beginning, took entrepreneurs, took small businesses, and now also some large businesses, can give them an equal playing field to reach 140 million buyers around the world.”

The interview itself was in and of itself a way to measure just how far Bitcoin’s acceptance has come. While Donahoe supported Bitcoin and even said that he owned it and was interested in its potential as technology, CNBC’s Andrew Sorkin, who was interviewing him, made comments that suggest his misunderstanding or blatant ignorance of the matter.

Andrew Sorkin, in a more skeptical tone to fellow anchors:

‘I gotta tell you, I don’t know if it’s Stockholm Syndrome or what, but everybody that I talk to out here [...] really does talk about Bitcoin as the next big thing. And they believe it.’

This is a big step, for sure. The closer eBay and PayPal come closer to accepting and integrating Bitcoin, the easier it will be for similar sites and services to facilitate Bitcoin as a legitimate currency. PayPal itself is has a huge reach in payment processes across the nation. These quotes are actually a huge step from last year’s comments made by Mr. Donahoe. In April of last year, he said to the Wall Street Journal:

‘It’s a new disruptive technology, so, yeah, we’re looking at Bitcoin closely. There may be ways to enable it inside PayPal.’

At that time, Bitcoin was only reeling in the post-Cyprus media exposure. In January of 2014, CCN wrote that PayPal’s future acceptance of Bitcoin would not be to far away. Today, thanks to this video and ECB monetary policy, Bitcoin has taken measurable and amazing leaps forward. It is no longer PayPal Vs. Bitcoin; it is now PayPal and digital currencies. No specific time has been set, though.

Join the Dots. How Does a NDD Do you feel comfortable

Bitcoin suffered some serious setbacks in the past year. The most prominent of these were hostility from the People’s Bank of China, the Department of Justice’s seizure of Silk Road, and the massive failure at Mt. Gox. However, bitcoin is proving to be resilient and making a slow come back. Last week showed that many mainstream counterparties are eager to get involved with bitcoin including Apple, Facebook, institutional investors and even the Security and Exchange Commission.

Here is a not so boring week in review:

Bitcoin Is (Kind Of) Exempt From Foreign Tax Reporting Requirement

Anyone subject to the jurisdiction of the United States who has financial accounts overseas with an aggregate value exceeding $10,000 is required to file a Foreign Bank and Financial Accounts (FBAR) report. A spokesman from the IRS stated last week that

“At this time, FinCEN has said Bitcoin is not reportable on the FBAR, at least for this filing season.”

While it is now clear that bitcoins held overseas do not count towards the FBAR requirement, it still is not clear if government issued currencies held in bitcoin exchanges or e-wallets oversees count towards FBAR. The IRS spokesman also stated that his statement above could change as the IRS continues to shape bitcoin tax policy.

Erik Voorhees raised about 50,000 bitcoins over the course of 2012 and 2013 on public Bitcoin forums in exchange for shares in his companies, SatoshiDICE and FeedZeBirds. The SEC then charged Voorhees with offering unregistered securities.

The SEC has provided no guidance to the public regarding bitcoin securities offerings. A securities offering implies that money was raised. In order for the SEC to have jurisdiction in this case, the SEC would have to consider bitcoin as money. The IRS declared that bitcoin is not money, rather it is property. With multiple federal regulators tacking on their own definition of what bitcoin is, Voorhees had no way to know that he needed to register with the SEC.

Last week Voorhees settled this case with the SEC for about $50,000 neither accepting nor denying the charges.

The Swiss Financial Market Supervisory Authority (FINMA) requested Bitcoin Suisse AG, the operator of bitcoin ATMs in Switzerland and the Netherlands, to suspend the launch of ATMs in Zurich until “open legal questions” can be clarified. FINMA would not clarify to the press what “legal questions” need to be clarified, but according to the Bitcoin Association of Switzerland, FINMA might be considering imposing a banking license on the bitcoin ATM operator. Further, it is not clear whether or not bitcoin ATMs can operate for non-commercial purposes. If not, they would need to be licensed. The ATM operator expects to be back online by the end of June. Given that this case is probably not a FINMA priority, this timeline seems ambitious given the host of other issues FINMA oversees.

Is forex market controlled Forecast and levels for Press review

Hi, I'm wondering if anyone can recommend some specific exchanges to start using bitcoin? I'm new to the game so to speak and am not really technically minded, so any suggestions would be welcome as there seem endless options! Thanks

New to EA Forex Newbie Read file from another

That is exactly what they are doing

Thanks for the video

The FBI announces it is preparing to sell the 144,341 Bitcoins that were collected during raids in the online drug market Silk Road. While the WSJ reports, the timing and sales method are unclear, it is already weighing on the virtual currency as the Bitcoin traders front run the Fed's unwind... 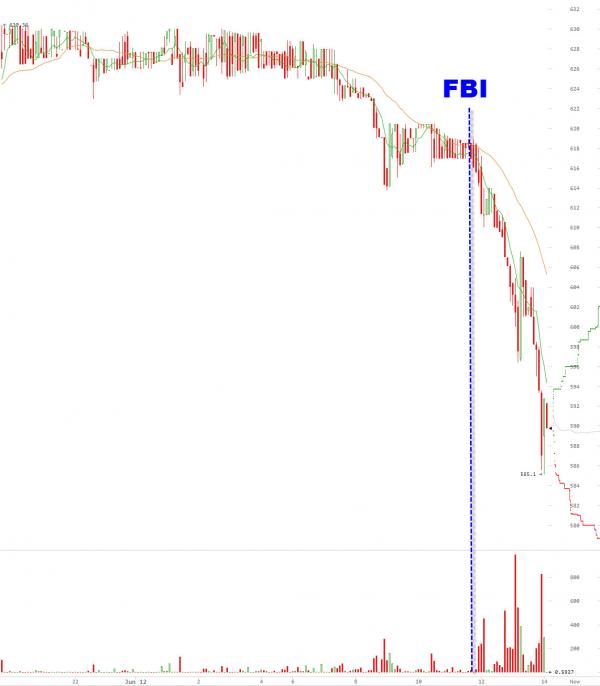 We have previously illustrated how a Bitcoin transaction works, and the history of the virtual currency, However, we thought that this infographic neatly covered many interesting bitcoin facts in a digestable form. It not only shows the versatility of the bitcoin market, but it also captures the difference of opinion on cryptocurrencies: many embrace the technology, but some institutions show signs of hostility. Chinese banks have banned bitcoin trading and Thailand outlawed it straight up.

Bitcoin extends drop to below $550 as sentiment remains shaky

According to the CoinDesk Bitcoin Price Index, which averages prices from the major exchanges, prices of the crypto-currency declined 2.79% to trade at $555.75.

The U.S. Marshals Service said on June 12 that it plans to auction approximately 30,000 bitcoins, valued at nearly $17.3 million, that were seized as part of the Federal Bureau of Investigation's crackdown on the Silk Road online marketplace last year.