The guy is planning to launder the money. Low risk my ....

As the most prominent trade group pushing adoption of the electronic currency Bitcoin begins its annual conference on Friday, it is being roiled by controversy.

At least 10 members of the nonprofit Bitcoin Foundation have resigned over last week's election of onetime Disney child star and current Bitcoin entrepreneur and financier Brock Pierce as a new director, officials at the group said.

Some of the members cited Pierce's troubled past. That includes allegations in lawsuits from three employees of Pierce's first company, bankrupt web video business Digital Entertainment Network, that he provided drugs and pressured them for sex when they were minors.

Pierce has denied the accusations, which first surfaced in 2000.

"The allegations against me are not true, and I have never had intimate or sexual contact with any of the people who made those allegations," Pierce told Reuters via email.

Court records show 33-year-old Pierce, who played the title role in Disney's "First Kid," paid more than $21,000 to settle one employee suit, and he said others dropped their claims without money changing hands.

While Bitcoin Foundation officials played down the defections, several members who resigned from the Foundation assailed its governance track record.

"The track record of prominent Bitcoin Foundation members has been abysmal," said Patrick Alexander, a resigning Foundation member in a post on its discussion pages. "I no longer want to be associated with these people." Attempts to reach him for additional comment were unsuccessful.

Though it is highly volatile, the value of the electronic currency in existence has skyrocketed into the billions of dollars as the number of businesses accepting it has increased and investors have sought to create new ways for it to be used.

More than 1,000 Bitcoin investors, business people and enthusiasts are expected to attend the conference in Amsterdam.

The programming effort that governs how Bitcoin works is led by Gavin Andresen, who is chief scientist at the Foundation and gets a salary from it. The Foundation also plays an important role for Bitcoin in lobbying on its behalf in various jurisdiction as authorities grapple with how to police the semi-anonymous currency.

A 3rd class child actor is going to save Bitcoin. Hallelujah

Nearly a dozen members of the Bitcoin Foundation, the most influential bitcoin lobby group, have resigned over the election of former Disney child star Brock Pierce as the organization’s new director.

Before becoming a bitcoin entrepreneur and financier, Brock starred in several high-profile children’s movies, including Disney’s 'The Mighty Ducks' and 'D:2 The Mighty Ducks,' as well as 'First Kid.' He then moved away from the Hollywood world and eventually started his own web video business known as Digital Entertainment Network, where employees accused him of pressuring them for sex and providing drugs to minors.

The company eventually went bankrupt, but Pierce has consistently denied any truth to the accusations, which first surfaced in 2009. Reuters obtained court records indicating that Pierce paid one employee $21,000 to settle a suit.

“The allegations against me are not true, and I have never had intimate or sexual contact with any of the people who made those allegations,” Pierce told reporters.

Several of the ten members who walked away from the foundation cited the allegations against Pierce as the reason for their departure, with some pleading with the board of directors to conduct more comprehensive background checks on future officials.

“The track record of the prominent Bitcoin Foundation members has been abysmal,” Patrick Alexander, one member who resigned, wrote on a bitcoin discussion forum. “I no longer want to be associated with these people.”

Others decried the group’s vetting process.

“The board has made repeated hollow promises about transparency,” another member wrote. “It’s been a year, and the only transparency the foundation has created has been the illusion of transparency at the expense of the forum using members by turning their private communications public overnight and zero transparency on the board itself. There are no financials. There are no minutes. There is no record of how board members are voting – and which ones are even participating.”

The resignations underscore the foundation's current precarious position. Officials announced in March that they had hired Jim Harper, a former lobbyist at the libertarian Cato Institute, to represent bitcoin and to “identity political impediments to bitcoin adoption, and build confidence in bitcoin among governments around the world,” as quoted by The Wall Street Journal.

Yet even as Harper’s introduction signified a new kind of legitimacy for the cryptocurrency, many users immediately drew a line in the sand. Online posts decrying the strategy as a step toward the mainstream were common throughout bitcoin community forums, even as others were encouraged.

The controversy now shows no sign of de-escalating with Pierce’s appointment.

Does anybody knows how did Brock Pierce get into this?

"I am owed 28,296 Bitcoins. I do not accept United States dollars, as it is the preferred currency of criminal organizations such as the FBI, DOJ, ATF, and Federal Reserve and I do not assist criminal racketeering enterprises."

Peter Schiff is a famous gold proponent and investor, and more recently he has become known for his hatred of bitcoin. That is why it may seem odd that Schiff's Euro Pacific Precious Metals has announced that it is pairing with bitcoin payment processor BitPay in order to allow investors to buy gold and silver through Euro Pacific by using the digital currency.

In a November 2013 appearance on CNBC's "Futures Now," Schiff, chairman of Euro Pacific, declared that bitcoin was in a bubble that resembles "modern-day tulip mania." He added that "I don't think it's going to end up being a source of commerce for the world."

On Wednesday, BitPay announced that it was partnering with Euro Pacific in an arrangement that will allow customers to spend bitcoin in exchange for precious metals. But Schiff maintains that there has been no change in his thinking.

"My views have not evolved," Schiff wrote to CNBC.com. "A lot of people still own bitcoins, and for now, they are still valuable. So I certainly want to make it easier for bitcoin owners to use their bitcoins to purchase gold and silver from my company."

To be sure, the partnership does not mean that Euro Pacific is not taking any position in bitcoin. BitPay converts the bitcoins from customers into the U.S. dollars in which Euro Pacific will be paid.

"It's a means of payment that allows us to complete the equivalent of credit card transactions, but with a much more efficient process and with a much lower fee," said Michael Finger, director of marketing at Euro Pacific. "Bitcoin facilitates the process, but we're not speculating on bitcoin in any way."

When People Realize Where Silver Technical Analysis - the reason why bitcoin

Bitcoin prices have taken off in the last few days.

In recent action, bitcoin BTCUSD +0.60% rose to $532.13. That’s up about 20% since last Friday’s level of $445.01 according to CoinDesk’s bitcoin price index, which tracks prices on three exchanges. While $500 is a far cry from levels around $1,000, where bitcoin was trading late last year, it’s significant because bitcoin has been hovering in the $400s since late March.

Here’s a one-month chart of price action, via CoinDesk: 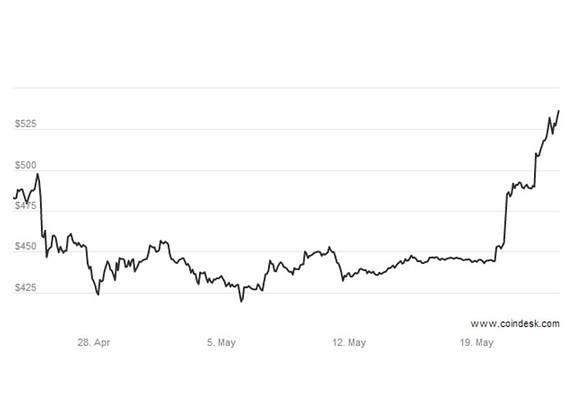 It is all because Li Ka-shing invested in bitcoin. As soon as he uses it for laundering it will be back where it was