1278
Asian markets ended modest gains as investors reacted to corporate earnings on Wall Street and after the price of oil rebounded from the low seen in the last two weeks, explained by the release of inventories of this raw material in the US. At the same time, tensions between the US and the Korean Peninsula continue to influence investors' sentiment.
Objects - Charts - World Stock Indexes Trading Trusted Forex Brokers Rating

1278
Asian markets ended modest gains as investors reacted to corporate earnings on Wall Street and after the price of oil rebounded from the low seen in the last two weeks, explained by the release of inventories of this raw material in the US. At the same time, tensions between the US and the Korean Peninsula continue to influence investors' sentiment.
Objects - Charts - World Stock Indexes Trading Trusted Forex Brokers Rating

1278
In the pre-opening, the European markets were negotiating in different directions, after the attack that happened yesterday in Paris which aggravated an environment of quite uncertainty in two days of the presidential elections in the country, an event that has been accompanied by all Financial markets players. In fact, this election is highly uncertain given the complexity of the current situation and the fact that the polls point to four candidates with very close voting preferences. Last week saw an increase in put options on the Eurostoxx 50, signaling that several institutional investors have used these financial instruments to protect their portfolios from hypothetical adverse scenarios. In other words, several investors have already reduced their exposure to French assets, anticipating the occurrence of hypothetical unfavorable scenarios.
Objects - Charts - World Stock Indexes Trading Market View; World Stock 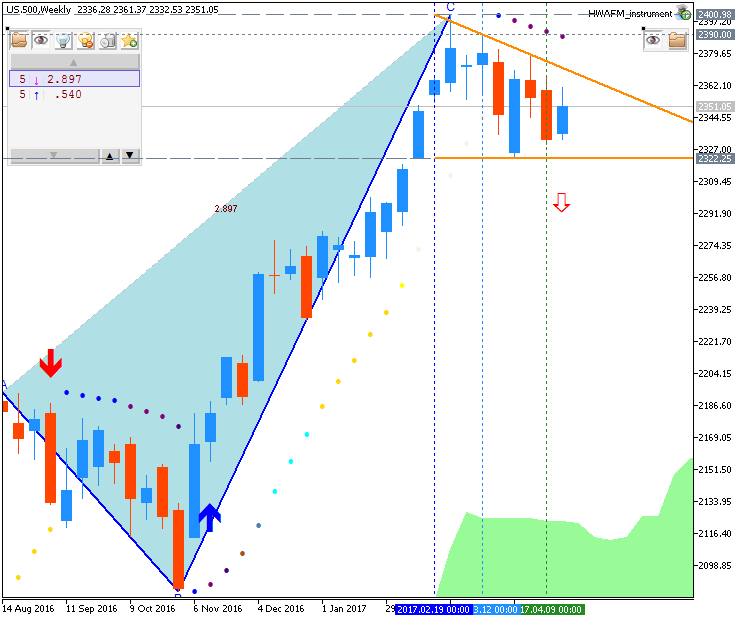 S&P 500 - "Markets will start out the week with the French presidential election on their minds, but to what impact it will have on U.S. markets likely depends on the magnitude to which Europe moves, and any reaction the U.S. has may be short-lived. Looking to key economic events on the docket; ‘high’ impact data releases include Consumer Confidence on Tuesday, Advanced Goods Trade Balance and Durable Goods Orders on Thursday, and 1Q GDP on Friday. President Donald Trump announced on Friday that he will unveil a tax plan this coming week. Markets will almost certainly show a response once the details are released."

1278
During the Asian session, the Euro reached a high of the last five months, favored by the increase of the degree of confidence regarding the victory of Macron, a defender of the European Union. In fact, for the second round, investors, supported by the vast majority of polls, estimate a comfortable victory for Emmanuel Macron, however, the occurrence of possible terrorist attacks could favor the rhetoric of the far-right candidate.
World Stock Indexes Trading GBPUSD news Press review

1278
The Nasdaq Composite index broke the 6,000-point barrier for the first time, 40 percent of which is influenced by five major companies (Amazon, Facebook, Netflix, Alphabet and Apple). In turn, the Dow Jones has temporarily outperformed 21,000 points, with Caterpillar and McDonald’s being the biggest catalyst for gains.
Objects - Charts - Dow falls 150 points Nasdaq-100 index hits record

1278
In the pre-opening, the European markets traded slightly lower. In addition to the business results, the day will be marked by the European Central Bank meeting. The Central Bank is expected to maintain the broad outlines of the latest releases, although it may not be possible to change some nuances in order to prepare the financial markets for a deeper modification of its message in the coming months when the ECB announces that it will stop with the measures of Liquidity generation. This scenario has already been discussed within the Central Bank, with the members of the Northern European countries advocating a faster monetary policy change, which contrasts with Mario Draghi’s more moderate stance and the other members of the Executive committee. Tomorrow will be known relevant economic data to the economy of the Euro Zone, such as inflation for April, as well as GDP in France and the United Kingdom.
Objects - Charts - The European Central Bank Euro exchange rate important

1278
Today will be published the first reading of the GDP of the first quarter of this year. The improvement in economic sentiment did not translate into a sharp increase in the real economy. The index of coincident economic indicators (whose denomination comes from the fact that their cycles coincide with those of the economy and as such a reliable sample) rose from 180.60 at the beginning of the year to 182.29 in March, a mere advance of 0.93%.
Objects - Charts - Forex News (from InstaForex) Market View; World Stock 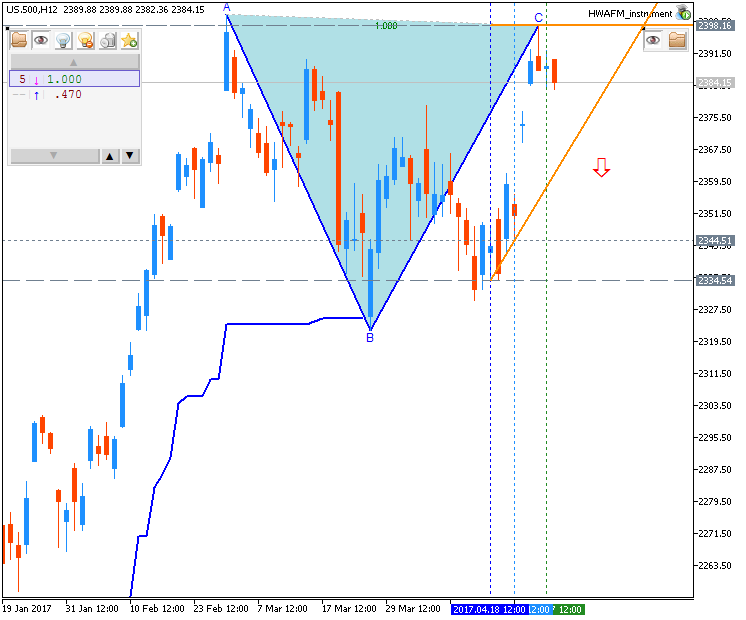 S&P 500 - "Looking ahead, Monday may be relatively quiet with major financial centers in Europe closed for holiday. In terms of scheduled ‘high’ impact data events, we have Core Personal Consumption Expenditure (PCE) and ISM Manufacturing on Monday; and the big event of the week coming on Friday when the April jobs report is due out. The market will be looking for a strong rebound in NFPs (+180k estimate) after the big miss in March of only +98k."

If on one hand the theme of Brexit was once again the order of the day, on the other hand the approach of the second round of the French presidential elections (There is a televised debate between the two candidates Emmanuel Macron and Marine Le Pen) is also to be monitored. Regarding Brexit, some news reports say that Europe "seems to be divided" with France and Germany tightening their positions on the UK. According to a Financial Times analysis, the gross amount to be paid in advance by the United Kingdom may amount to € 100,000 M., an amount almost twice as high as the € 60,000 M. initially suggested by the President of the European Commission, Jean-Claude Juncker. The results published yesterday in the US by Apple could condition the actions of several European technology companies that are suppliers of the Cupertino company.