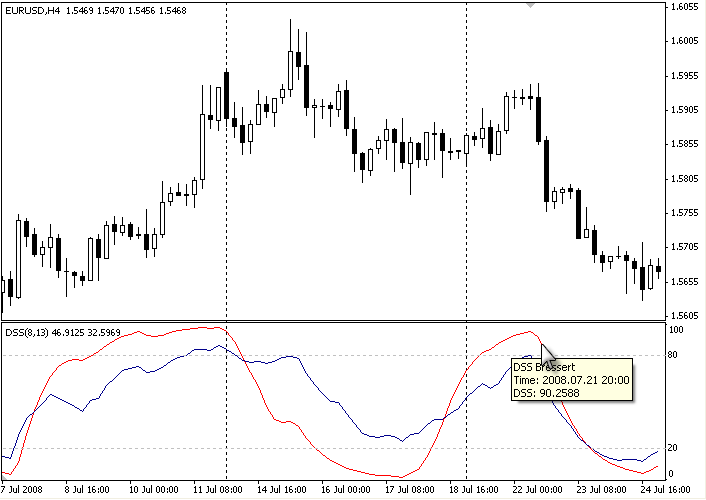 The formula for the calculation is taken from the website http://www.tradesignalonline.com/Lexicon/Default.aspx?name=DSS%3A+Double+Smoothed+Stochastics+(Bressert)

Description
One after the other, William Blau and Walter Bressert each presented a version of the Double Smoothed Stochastics. Two exponentially smoothed MAs are used to even out the input values (H, L and C), in a similar way to the well-known stochastic formula.

Calculation
Calculation of the DSS indicator according to Bressert is similar to stochastics.
1.) The numerator: first the difference between the current close and the period low is formed. The denominator: here the difference between the period high minus the period low is calculated. Now the quotient of numerator and denominator is calculated, exponentially smoothed and then multiplied by 100.
2.) The method is analogous to 1.) with the distinction that now the prices of the newly calculated price series of 1.) is used. 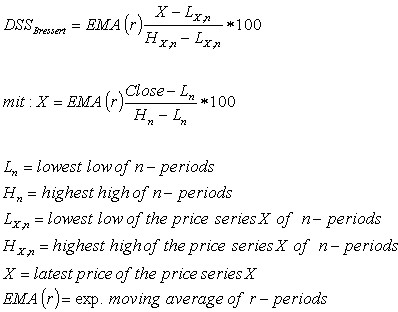 Parameters
The adjustable period length can be chosen from 2 to 500. The most common settings will have a period length ranging from 5 to 30. In addition, the indicator can be smoothed in the interval from 1 to 50. Meaningful smoothing values lie in the short-term range.

Interpretation
The application of the DSS is comparable with that of the stochastic method. Accordingly, values above 70 or 80 must be regarded as overbought and values below 20 or 30 as oversold. A rise of the DSS above its center line should be viewed as bullish, and a fall of the DSS below its center line as bearish.

Well, the functions of file operations are used in the system library of kernel32.dll. It is this library that we import into the EA. The code is attached.

I've tested the EA on EUR/USD M15, it uses stochastic and RSI.

The script swaps out all the symbols available in the Market Watch window into a csv file.