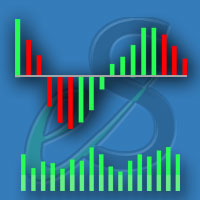 Volume Weighted MACD (VW-MACD) was created by Buff Dormeier and described in his book Investing With Volume Analysis. It represents the convergence and divergence of volume-weighted price trends.

The inclusion of volume allows the VW-MACD to be generally more responsive and reliable than the traditional MACD.

Moving Average Convergence Divergence was created by Gerald Appel in 1979. Standard MACD plots the difference between a short term exponential average and a long term exponential average. When the difference (the MACD line) is positive and rising, it suggests prices trend is up. When the MACD line is negative, it suggests prices trend is down.

What is the difference between MACD and VW-MACD?

The signal line is left as an exponential moving average because VW-MACD line is already volume weighted.

VW-MACD histogram is amplified by a factor in order to have a better visibility of all changes.