Something Interesting in Financial Video July 2013

24. The Difference Between the Fast, Slow and Full Stochastic

Answer to a question on what is the difference between the fast stochastic, slow stochastic and full stochastic

Ideally, we should use Stochastics, and any other indicator for that matter, only to take trades in the direction of the Daliy trend. So if a trader determines that a pair is in an uptrend, they would then consult Stochastics to time their entry after Stochastics has been below 20 and then closed above the 20 level. In a downtrend, such as we have on the Daily chart of the USDCHF below, they would look for Stochastics to have been above 80 and then close below it for the signal to sell the pair.

See the chart below for an example of this : 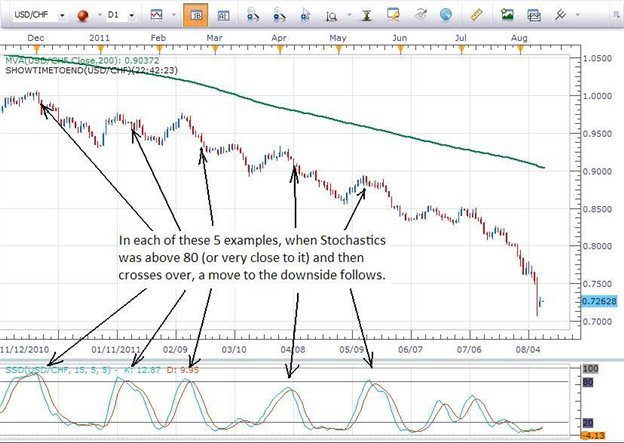 For Stochastics to close below 80 in a downtrend or above 20 in an uptrend is a much stronger signal than if Stochastics simply goes above or below those levels during the course of the time that the candle is open.

For example, let's say that a trader is using a 1 hour chart. When that 1 hour candle closes at the end of the hour, the trader can check Stochastics to see if the two moving averages were above 20 or below 80 after the close occurred. That will confirm that the indicator did indeed close above or below the requisite level.

Trading with Stochastics
Stochastics gives its strongest sell signal when the two moving averages that comprise it have first been above 80 and then close below the 80 level. The strongest buying signal is given when the two moving averages have first been below 20 and then close above 20. to take trades in the direction of the Daliy trend. So if a trader determines...
Learn how to design stochastic formation Something Interesting in Financial

Developed by George C. Lane in the late 1950s, the Stochastic Oscillator is a momentum indicator that shows the location of the current close relative to the high/low range over a certain number of periods.

First of all, the difference between Fast Stochastics and Slow Stochastics is just a moving average. 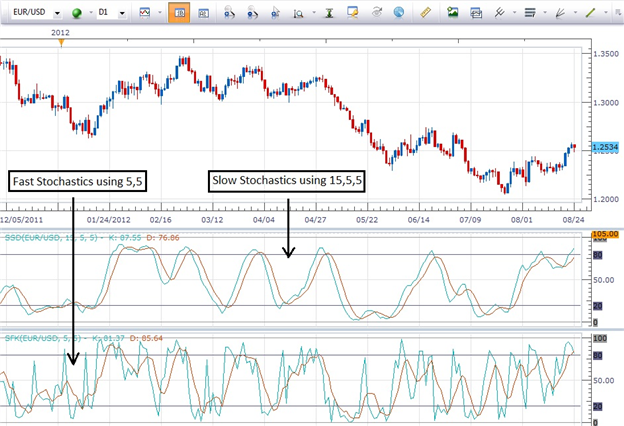 You can see how much easier it is to identify the signals using the Slow Stochastics. Being able to use the technical tool effectively is most of the battle. By keeping things simple and consistent, we should start to see consistent results in our trading.

As with all indicators, entering a trade only when the indicator generates an entry that is in the direction of the trend can result in a higher probability of success.

i have tough question about the %k or %d value is not incorrect or disaccord with picture when i use stochastic indicator in my ea. i just use it as below,

like above, sometimes it works well but sometime it is bad when they should be sent buy or sell signal.

Can you help me?  How should i do? Thanks for your help in advance!

Can you help me?  How should i do? Thanks for your help in advance!

K or D may be changed when a new tick, but we bars of 1 minute, generate the signature, ticks, minute, may cause some deviation?

Are two ticks may be the time between one minute is too small, so we can not just capture the moment of the cross to K / D

Learn how to design How to save last close code

How are you K and D arrays declared ? From the code I see K[0] and D[0] are the values of last closed candles and K[1] and D[1] the values of current (open) candle. You probably have to use ArraySetAsSeries() to inverse the index. 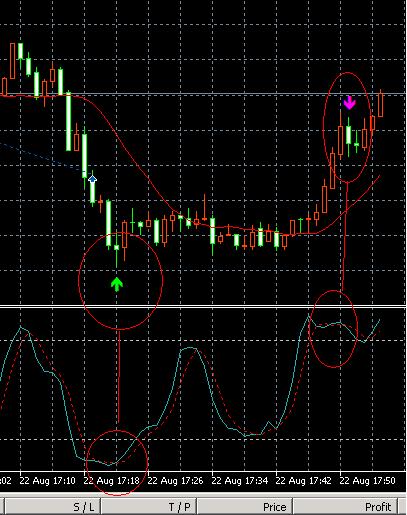 in this picture, two arrows should produce two signals but my ea can't send, why?


How are you K and D arrays declared ? From the code I see K[0] and D[0] are the values of last closed candles and K[1] and D[1] the values of current (open) candle. You probably have to use ArraySetAsSeries() to inverse the index.

Values of current/open candle are always changing.
k[0] is the current candle and k[1] the last candles, did i make a mistake?