Make my day - any live results via correlations !!?

You just trashed it by saying:

This is the worst thing you can say about a trading system.

And shortly after this you admit you did not try it all, which makes me think, what have you tried ...? And then why did you even say it ?

The problem is that people read it and may discard it based upon your words, it's very destructive.

But i have given an example already:

Now i will expand on this because numbers do not trigger the same trading ideas as visual representations.

So here it is visually: 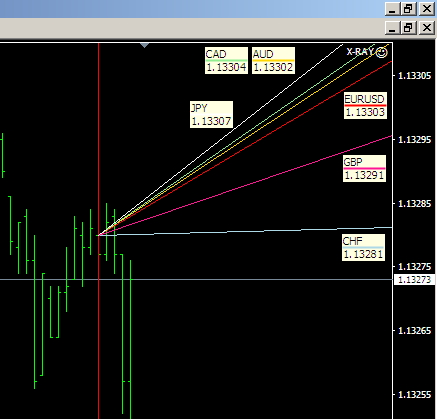 This image represents those numbers in a visual way and immediately you can spot things.

For example CHF is low, this means it has the highest odds (out of these 5) to move back up.

It is less likely that all the other 5 will move towards the one lower.

Then you look at  all the spreads and make sure you only enter on the best deals. Of course this is just a tiny element that is bundled into a much larger system,

So my question is,

Did you try this specific correlation strategy ?

The truth about indicators alarm going off repeatedly Disbelief - It's luck


So here it is visually:

Marco, how did you get those numbers in the screen, which differ from what you pasted as text quote? Do you mean they are USD cross-rates, and you are after two pairs with largest spread on synthetic EURUSD? Then this is a scalping strategy, isn't it?
An EA cheated the Why some great coders Error, No Price for

Of course this is just a tiny element that is bundled into a much larger system,

So my question is,

Did you try this specific correlation strategy ?

Correlation strategy that starts with collecting Tick-volumes - No, I didn't try.

If you believe it can be profitable - great, wishing your best of luck.

You may find usefull to see all possible 3-way-combinations that I have checked (below).

NOTE: markets are perfect - any tiny disbalance gets caught by big sharks =))

how to open trades enum to send trades setting a bool array,

That text example is related to a fixed EURUSD value it has little to do with the screenshot.

The screen is a real life scenario which displays the minor differences in between.

I am after the two pairs with the lowest spread these happened to be EURJPY and USDJPY last week.

It could be considered scalping but that depends on the position sizes.

You can run it shortly with large lotsizes, but it also works very well with 0.01 or 0.1 and longer running combo's.

The beauty of it is the safe haven it creates you can set it up in several ways.

For example you can set it up in a way, that it will be profitable in both directions, the only requirement that has to be made is a asymmetric move in either one direction.

Those occur on a regular basis, or you can set it up to be more profitable in one direction while still using the mirrored currency as a compass.

Tiny details are what make all the difference, when both become profitable you can trail both positions as far as possible.

When one becomes profitable but the other shows a slight loss but the combined position is positive you can also trail that if you know how.

Another setup i love to do is trading bidirectional at the same time in both directions but this requires you to learn those skills since you have to know what to look for.

And in case they both get over 5% risk you simply close the both of them and restart the process at the next time node.

Market: What's going on? Which of the following BUILDING AN EXPERT ADVISOR


Correlation strategy that starts with collecting Tick-volumes - No, I didn't try.

If you believe it can be profitable - great, wishing your best of luck.

You may find usefull to see all possible 3-way-combinations that I have checked (below).

NOTE: markets are perfect - any tiny disbalance gets caught by big sharks =))

This strategy only looks at tick volumes to discriminate between fast and slower moving markets.

This is combined with the trend strength to further discriminate between steady one way trends, and trends with a more limited amplitude.

Then the spreads are compared to calculate the final decision, a combination of the highest volumes, preferably in the same direction, with the lowest spread.

Then these results are sorted, and combinations are calculated to discover the higher odds cross combinations with the best set of conditions.

There is a difference between blindly opening a multi symbol hedge position, and calculating every aspect to pick the one that has the highest probability on a successful outcome.

In the beginning i saw great losses which made no sense at all, but i never gave up on the strategy and improved it over the years,

Up to the point where it produces acceptable performance, of a quality that i find difficult to reproduce with any other given strategy.

Is MT4 optimization a Backtesting with Virtual Trades? Is there a good
1234
New comment