Can anyone please give me advise on using the ZigZig Separate Indicator? 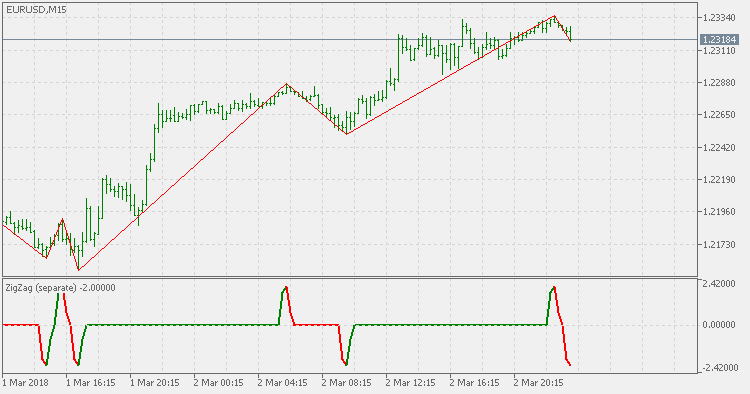 It is not a matter if it is useful or not (ZigZag is, in my opinion a useful indicator), but a matter of avoiding misuse of the indicator and presenting it as something it is not. Regardless of the completely different look than the ZigZag indicator, that is a ZigZag indicator as it can be seen on the parallel display too.

PS: always keep in mind that this is actually a ZigZag indicator - it should not be used in signaling mode.

Usually zigzag is used as a filter. But zigzag is not simpe indicator. You may read it here:

For additional information on the Zig Zag indicator, refer to Filtered Waves by Arthur Merrill.

The Elliott Wave Theory is named after Ralph Nelson Elliott. Inspired by the Dow Theory and by observations found throughout nature, Elliott concluded that the movement of the stock market could be predicted by observing and identifying a repetitive pattern of waves. In fact, Elliott believed that all of man's activities, not just the stock market, were influenced by these identifiable series of waves. With the help of C. J. Collins, Elliott's ideas received the attention of Wall Street in a series of articles published in Financial World magazine in 1939. During the 1950s and 1960s (after Elliott's passing), his work was advanced by Hamilton Bolton. In 1960, Bolton wrote Elliott Wave Principle--A Critical Appraisal. This was the first significant work since Elliott's passing. In 1978, Robert Prechter and A. J. Frost collaborated to write the book Elliott Wave Principle.

The underlying forces behind the Elliott Wave Theory are of building up and tearing down. The basic concepts of the Elliott Wave Theory are listed below. Action is followed by reaction. There are five waves in the direction of the main trend followed by three corrective waves (a "5-3" move). A 5-3 move completes a cycle. This 5-3 move then becomes two subdivisions of the next higher 5-3 wave. The underlying 5-3 pattern remains constant, though the time span of each may vary. The basic pattern is made up of eight waves (five up and three down) which are labeled 1, 2, 3, 4, 5, a, b, and c on the following chart. Waves 1, 3, and 5 are called impulse waves. Waves 2 and 4 are called corrective waves. Waves a, b, and c correct the main trend made by waves 1 through 5. The main trend is established by waves 1 through 5 and can be either up or down. Waves a, b, and c always move in the opposite direction of waves 1 through 5. Elliott Wave Theory holds that each wave within a wave count contains a complete 5-3 wave count of a smaller cycle. The longest wave count is called the Grand Supercycle. Grand Supercycle waves are comprised of Supercycles, and Supercycles are comprised of Cycles. This process continues into Primary, Intermediate, Minute, Minuette, and Sub-minuette waves.

Channel trading system
It is simple trading strategies. m217irr mentioned about it here but I did not understand it in that time...
How Zigzag indicator works? Call ZigZag indicator Elliott Wave Theory

How do i use the inputs for the ZigZag Indicator? - forum thread