A MACD indicator with histogram to show the difference between the MACD and Signal lines. 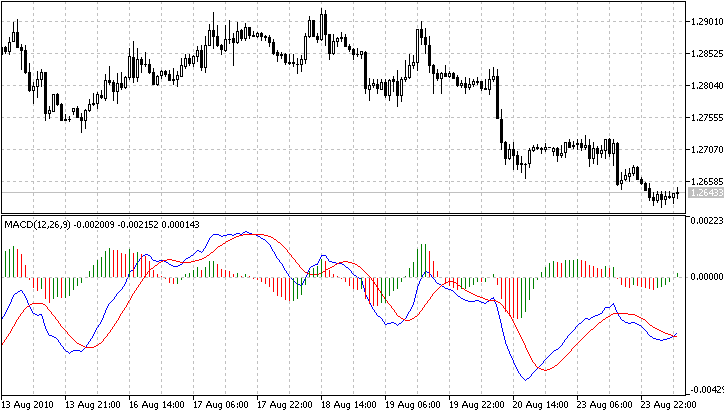 I keep on getting the following error

I'm assuming I'm the only one who is getting this error as no1 else has commented on this.

Please let me know how I can fix it.

I guess you copied the MACD_Histogram_MC.mq5 file in "C:\Program Files\MetaTrader 5\MQL5\Indicators\Examples\". It's not a good directory.

Your problem is an UAC issue, you can resolve it by following this procedure:

You can now run the EA.

Or even a more easy way by reading How to download code using MetaTrader 5, which is a link provide above all source code in Codebase.
Expert Advisors: Renko Line EA not showing up Failed to compile file

Thank You for your excellent assistance

Thank You for your excellent assistance

MACD stands for Moving Average Convergence Divergence and was first developed by Gerald Appel in the late 1970s. It is an Absolute Price Oscillator (APO) and can be used in an attempt to identify changes in market direction, strength and momentum.

It calculates the convergence and divergence between a ‘fast’ and a ‘slow’ Exponential Moving Average (EMA) known as the MACD Line. A signal EMA is then plotted over the MACD Line to show buy/sell opportunities. Appel specified the MA lengths as the following percentages:
Usually however these are rounded to EMAs of 26, 12 and 9 respectively. Many charting packages will also plot the difference between the Signal Line and MACD Line as a Histogram.

One of the biggest challenges when dealing with financial data is noise or erratic movements that cause false signals. By smoothing data out you can reduce the number of false signals. But this comes at a cost, and causes an increase in the lag of your signals. The genius of the MACD is that it begins by smoothing data (thus causing lag) and then speeds up the signals from the smoothed data. This combination helps to reduce false signals while minimising the lag.

By comparing EMAs of different lengths the MACD can help to identify subtle changes in the trend and momentum of a security. It is a great visual representation of the acceleration or rate of change in a trend.

How to Calculate a MACD


Obviously you can change the parameters to any value of your choice.

We have put together an Excel Spreadsheet that will automatically adjust to the MACD settings you desire. Find it at the following link near the bottom of the page under Downloads – Technical Indicators: Moving Average Convergence Divergence (MACD)

Is the MACD an effective indicator? We are putting it into the ring for the Technical Indicator Fight for Supremacy. It will be tested through 300 years of data across 16 global markets to discover which settings produce the best results and how it performs compared to other indicators:

Hi is there a version for MTL4 ? thanks.

Thank you for the Traditional MACD and I like it very much. I have a problem though that I can't figure out. For some reasons, after a while, the MACD and the Signal lines separate from each other. Then I double click on the indicator; the MACD Histogram window pops up and I click OK. Then, everything goes back to normal; the lines cross as they supposed to. I had no problem installing the file. Actually, I just double clicked on it and it installed itself into Navigator/Indicators/Markets folder. I would appreciate your opinion about the problem. Thanks again.

Hello, gentlemen, how are you?

I am developing an EA and I use this MACD indicator.

When I tried to use EA in real account and demo, this error appeared
"Not all data of ExtFastMaHandle has been calculated (-1brs) Error 4806"
How i can correct that error?
error 4806 on EA Coding help Error 4806 while using

I'm getting a 4802 error (cannot load custom indicator 'MQL5\Indicators\macd_histogram_mc'. I presume it is in the right directory. See image below.

However I'm not certain about the parameters (and their values) to pass on. Could anybody provide with a typical complete example? 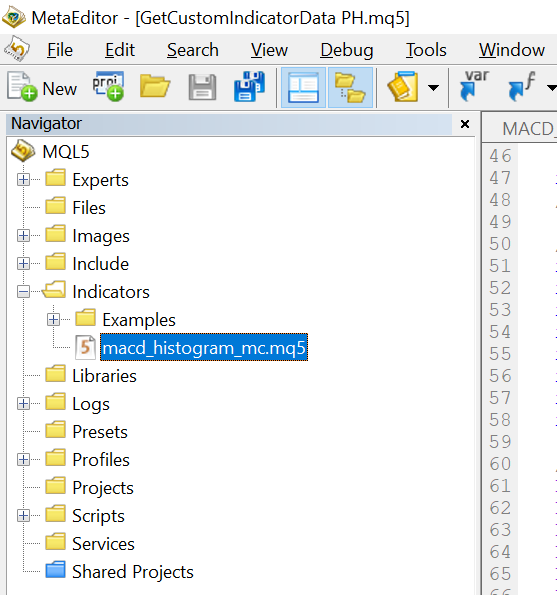