The value of bitcoin was little changed over the weekend, as the market digested sizable gains Friday that pushed the cryptocurrency to nearly one-month highs against the US dollar.

The BTC/USD exchange rate was trading at $615.99 Saturday at 1:57 pm ET, virtually unchanged from the previous close, according to CoinDesk. The pair traded within a narrow range of $616.50 and $618.46. The BTC/USD is facing strong resistance at its current price level, which also represents the 100-day moving average.

The US dollar experienced large gains against a basket of other major fiat currencies this week, as investors grew more confident that the Federal Reserve will raise interest rates in the coming months. Traders are pricing in a nearly 70% probability of a December liftoff, according to the 30-day Fed Fund futures prices.

Bitcoin has advanced more than 1% against the dollar this week, reaching its highest level since September 11. The cryptocurrency has slowly regained momentum over the past three weeks following a series of wild swings that was partially attributed to single traders changing their positions. Individual players continue to exert are large influence on bitcoin’s price, which reflects liquidity challenges in the market.

China has been a major source of volatility for bitcoin, as investors there look to diversify away from yuan-denominated assets that are subject to capital controls and influenced by domestic policies. The Chinese economy is also undergoing a painful restructuring process that is creating significant uncertainty about its future. However, this restructuring isn’t linear, as Beijing continues to rely on traditional growth drivers to move its development plans forward. For these and other reasons, more Chinese are attracted to bitcoin.

Bloomberg has reported that investment in conventional Chinese assets has declined significantly this year. At the same time, demand for bitcoin is surging. According to NewsBTC, in August the BTC/CNY exchange rate was responsible for 90% of trades involving bitcoin.

In crytocurrency news, the US Federal Bureau of Investigation (FBI) is probing the theft of $1.3 million bitcoins from an unnamed Bitfinex account. CoinDesk reports that the alleged theft occurred September 14.

The value of bitcoin was little changed Monday, as the market hovered below a key psychological resistance amid continued strength for the US dollar.

Demand for the US dollar remained firm Monday, as investors raised their bets on a year-end rate hike by the Federal Reserve. The dollar index rose 0.3% to 96.91, the highest since late July.

The market for fiat currency has grown more volatile in recent weeks, as the combination of monetary policy speculation, Brexit talks and US election jitters led to a huge divergence between currencies. The dollar has been the prime benefactor, whereas the British pound has plummeted.

There were few catalysts in the cryptocurrency market at the start of the week. The BTC/USD remains in the bullish zone, with investors eyeing a bigger breakout int he short term. Bitcoin’s value has appreciated more than 1% against the dollar over the past five days.

The price of bitcoin surged this week, reaching its highest level since late July as investors moved past a series of hacks that brought negative attention to the digital currency space.

There were no immediate catalysts behind the move, a sign that the digital currency had finally shaken off its mid-year slump. Bitcoin plunged in August after Hong Kong-based exchange Bitfinex reported that around $70 million worth of the digital currency had been compromised in a major cyber breach. The firm later announced it would “socialize” the losses among bitcoin balances.

Bitfinex recently issued the newly created BFX token to account holders affected by the hack. Customers are now able to exchange their tokens for a stake in the brokerage.

Prior to the summer slump, bitcoin had traded at its highest level in two years thanks to greater mainstream success and growing demand in China, where investors are trying to diversify away from yuan-denominated assets. However, bitcoin’s value remains prone to wild fluctuations due to liquidity challenges that often characterize a market still in its nascent stage.

Despite summer volatility, bitcoin has gained nearly 50% against the US dollar since the beginning of the year. The US dollar been in a three-week uptrend against other fiat currencies amid growing expectations the Federal Reserve will raise interest rates by year-end. The US dollar index is down around half a percent since the start of 2016.

The value of bitcoin was little changed Wednesday, as the market continued to consolidate following a large upswing early last week.

The BTC/USD exchange rate edged down 0.1% to $634.60 Wednesday morning at 7:41 am, according to CoinDesk. The pair traded within a very narrow range as the markets continued to search for a new catalyst.

Another currency worth watching is crypto-currency Bitcoin, which crossed the $700 mark for the first time since June this year.

While the rest of the world speculates about the US Federal Reserve rate hike in December and the US Presidential elections, Bitcoin has silently been on a tear away rally.

The crypto currency is quoting at $733.32, starting November with a bang, after the massive rise in October.

The 52-week high in the bitcoin is $781.31. Looks like Santa has arrived early for the Bitcoin traders.

It did some days ago.

The Bitcoin Bubble (based on the article)

The price on M30 chart is located near and above Ichimoku cloud in the bullish area of the chart near the border betweem the primary bearish and the primary bullish: descending triangle pattern was formed by the price with 2,697 support level to be crossed to below for the bearish reversal to be started. Besides, the 3-Drives bearish pattern is forming for the price to be reversed to the primary bearish market condition in intra-day basis for example. 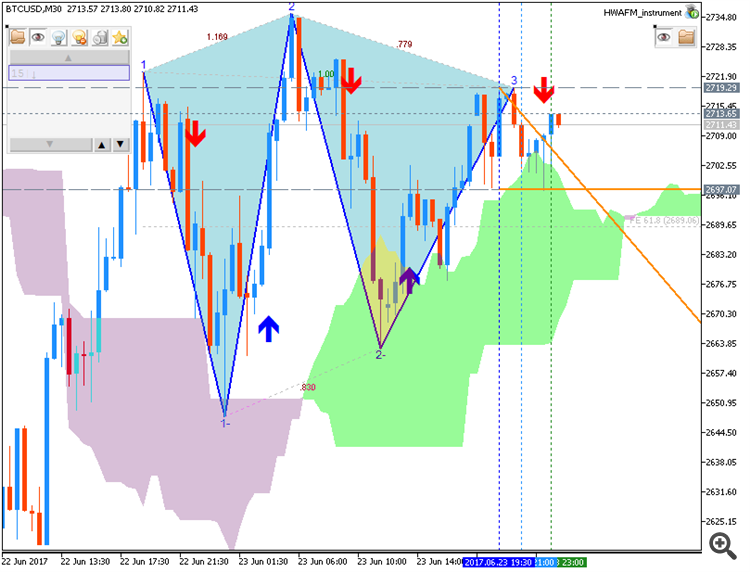 Forecast and levels for Press review Forecast for Q1'17 -

how can i see bitcoin and other crypto candle on saturday and  sunday?