No wonder that theft is spreding in the bitcoin net

Nearly half a billion dollars has gone missing, and nobody knows how. Some say there was outright theft. Others suspect fraud. Many blame lax controls, poor oversight and, above all, a reckless, globe-spanning, Wild West culture — a culture that everyone agrees is ripe for wholesale reform.

I’m not talking about Bitcoin. I’m talking about Citigroup, which disclosed last week that its Mexican banking unit lost $400 million in a contracting swindle involving a shaky oil services company.

for bitcoin a secure future might require traditional trappings - NYT

Here's the latest in a bizarre, winding saga sparked Thursday by a Newsweek cover story that alleged it had found the man who created Bitcoin: The police officers present for an important verbal exchange said the account as written by Newsweek reporter Leah McGrath Goodman is accurate.

In her story, Goodman described a scene outside the home of Dorian S. Nakamoto, the man purported to be the founder of Bitcoin, the crypto-currency. Nakamoto had called the police after Goodman came to his door, and the officers were there when he supposedly uttered this key quote: "I am no longer involved in that and I cannot discuss it," he said in the Newsweek story. "It's been turned over to other people. They are in charge of it now. I no longer have any connection."

According to the Sheriff's Department that dispatched the officers, the quote is accurate. "Both sheriff's deputies agreed that the quotes published in the March 6, 2014, Newsweek magazine Bitcoin article that were attributed to the resident and to one of the deputies were accurate," L.A. County Sheriff's Department Captain Mike Parker wrote in a statement.

There had been some doubt, after Nakamoto denied his involvement in a subsequent interview with The Associated Press. When asked by the AP if he ever made that statement to Goodman, Nakamoto said, "No."

"I'm saying I'm no longer in engineering. That's it," he told the AP of the exchange with Goodman. "And even if I was, when we get hired, you have to sign this document, contract saying you will not reveal anything we divulge during and after employment. So that's what I implied."

When the Sheriff's Department was contacted by CNET on Thursday, the watch commander declined to comment. "Not a chance," he said. By Friday, the department had changed its tune. Parker also wrote in his statement that the police officers were dispatched to the scene because Nakamoto had grown afraid to open his door, after Goodman had been sitting on his porch for the past hour.

What does it matter who is the creator of bitcoin. If he is the one and he denies, it ttells enough. If e is not and we all know what is bitcoin being used for lately and how people are robbed for they money, it is even worse. Someone completely unknown is let to play with money he/she does not own. Think about it

Bitcoin:Future of finance or a reckless gamble

Bitcoin:Future of finance or a reckless gamble

Mt. Gox, once the world's largest bitcoin exchange, filed for U.S. bankruptcy protection in Dallas late Sunday, a move that will temporarily halt U.S. legal action against the Japanese company.

Mt. Gox, which filed for bankruptcy protection in Japan in February, said without U.S. protection it would spend substantial funds defending itself against a U.S. lawsuit seeking class action status that was filed in federal court in Chicago.

A hearing in Dallas was scheduled for 1:30 p.m. local time on Monday to consider Mt. Gox's request to stay pending lawsuits against the company.

The plaintiff leading the Chicago lawsuit was scheduled on Tuesday to ask a federal judge to freeze Mt. Gox's U.S.-based servers and other computer equipment and to set up a trust over Mt. Gox's assets.

Mt. Gox's Japan filing last month came after it said it may have lost 750,000 of its customers' bitcoins as part of an attack by hackers.

Mt. Gox said in papers filed with the Dallas court that the hacking attack was the subject of an intense investigation that indicated so far the bitcoins were lost as a result of a flaw in the software algorithm that underlies bitcoin, the digital currency.

The Chapter 15 filing allows Mt. Gox to ask the U.S. Bankruptcy Court to recognize its foreign bankruptcy and to assist in the Japanese proceedings by protecting its U.S.-based assets. U.S. creditors can contest Mt. Gox's request for Chapter 15 protection.

Mt. Gox is defending itself against at least two U.S. lawsuits.

The U.S. derivatives regulator is studying whether it should regulate electronic currencies such as bitcoin, its chief said on Tuesday, as regulators across the globe start taking the emerging technology more seriously.

"We are looking into that," Mark Wetjen, acting chairman of the Commodity Futures Trading Commission, told journalists after giving a speech at an industry conference. "It's been initiated, there's been an internal discussion at the staff level."

Bitcoin, the best-known virtual currency, has been promoted by many enthusiasts because of the way it operates outside government control. But recent incidents, such as the failure of Mt. Gox, a Tokyo-based exchange that filed for bankruptcy after losing an estimated $650 million worth of customer bitcoins, have brought the currency under a new level of scrutiny by regulators.

Unlike conventional money, bitcoin is generated by computers and is independent of control, or any backing, by a government or a central bank - something that makes it vulnerable to mishaps.

Wetjen said the CFTC, which regulates swaps and futures, has broad authority to counter manipulation of commodity markets, and it is studying whether bitcoin falls under those rules.

"I think people (in the agency) believe there's a pretty good argument that it would fit that definition," Wetjen said.

He added, "Then there's a separate question about whether or not there is some derivative contract based on, or denominated in a virtual currency and whether that's listed on an exchange. ... There's some looking into that question too."

Something Interesting in Financial Press review Forecast and levels for

i think bitcoin it not safe. it is easy to steal. it is a disavantage of bitcoin

Isn't It Ironic: Mt.Gox Hacker Demands Ransom From Exchange Users To Not Reveal Their

The bankruptcy of the once largest Bitcoin exchange may be history, but now the real drama begins.

First, over the weekend, allegations surfaced that not the whole truth may have been revealed during the heartfelt announcement by Mt. Gox CEO, Mark Karpeles, who claimed that $400 million in Bitcoin were stolen by hackers. As Forbes reported, hackers took over the Reddit account and personal blog of Mark Karpeles, to reveal that the exchange he ran had actually kept at least some of the bitcoins that the company had said were stolen from users.

"It’s time that MTGOX got the bitcoin communities wrath instead of [the] Bitcoin Community getting Goxed,” wrote the unidentified hackers, referring to the multiple occasions over its three year history when Mt. Gox has gone offline, delayed trades or suspended withdrawals, events so common that Bitcoin users coined the phrase to be “goxed”–to suffer from Mt. Gox’s technical glitches.

In addition to merely allege, however, the hackers provided proof:

The hackers also posted a 716 megabyte file to Karpeles’ personal website that they said comprised stolen data from Mt. Gox’s servers. It appears to include an Excel spreadsheet of over a million trades, a file that purports to show the company’s balances in eighteen difference currencies, the backoffice application for some sort of administrative access to the databases of Mt. Gox’s parent company Tibanne Limited, a screenshot of the hackers’ access to those databases, a list of Mark Karpeles’ home addresses and Karpeles’ personal CV. 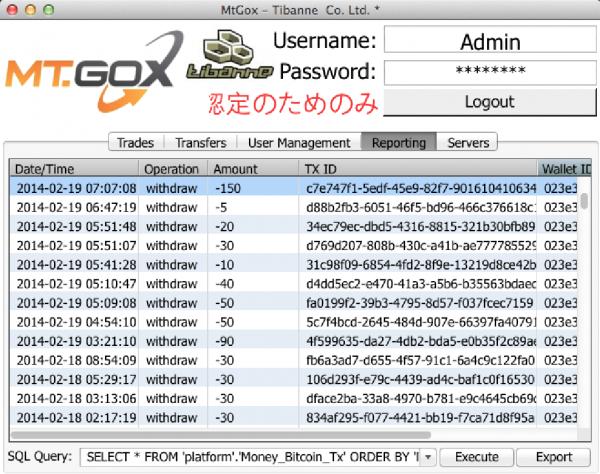 In the hackers’ summary of Mt. Gox’s balances in various currencies, they point to a claimed balance of 951,116 bitcoins, which they take as evidence that Mark Karpeles’ claim to have lost users’ digital currency to hackers is fraudulent. “That fat fuck has been lying!!” a note in the file reads.

It remains unclear at this early stage in the MtGox bankruptcy if indeed Karpeles ended up Madoffing some or all of the Bitcoin entrusted to him: Forbes notes that "the Bitcoin community has been puzzled by the apparent lack of movement of Mt. Gox’s bitcoins since the company declared bankruptcy last month. Despite stating that it lost 850,000 bitcoins in total in its bankruptcy filing, Bitcoin experts haven’t seen the movement of those coins in the Bitcoin blockchain, the public ledger of transactions that prevents fraud and forgery in the Bitcoin economy."

But second, and far more important, "a user on the BitcoinTalk forum posted a message–since deleted by the forum’s moderators–claiming to be offering for sale a 20 gigabyte stolen database from Mt. Gox, including the personal details of all its users and even scans of their passports. “This document will never be elsewhere published by us,” wrote the user, who went by the name nanashi____. “Selling it one or two times to make up personal loses from gox closure.” The hacker asked for a price of 100 bitcoins for the database, about $63,600 at current exchange rates."