If you want the "hurst channel" that does not repaint, simply use LWMA (linear weighted moving average - as we have told already LWMA is an "end pointed centered TMA") and set levels of the LW moving average to the desired value. As of mtf : I believe that there is already something similar (the multi time frame envelopes indicator for sure exists there)

Btw: the hurst channel is calculated the different way. Even when Millard uses the centered TMA for channeling the channel bounds are calculated in a manner that a certain percent of price should stay within the channel, so in that case even the bands distance is a subject of constant changes (depending on the price changes) That I did not post anywhere since I really do not want to explain to people that the bands are "repainting" (I call it recalculating but people would call it repainting) too

BASSRAMY:
I don't know if i will be bothering you or asking too much if i will ask you to post a Hurst bands with a repainting on and off feature and an MTF.

Thank you in advance.

Moved your post here since, due to the name given to that indicator, it belongs here

First of all : use this one

Set the BandsMode to 3 (linear weighted moving average - since "TMATrue" is nothing else but a simple LWMA, TMA (triangular moving average is something completely different (maybe it would be good to read this thread for explanation on awhat ceneterd TMA and TMA are and how centered TMA relates to LWMA) and set the ATRShift to 10 and you are going to get the same results as the one you posted + 2 additional pair of bands (adjust the levels to your likings - if the level is > 0, it will be shown on chart otherwise it will not, so you can control how many bands you want on chart)

Found this indicator (not made by me) :

Pls can You make mq5-version of TriangularMA centered with bands? If with arrows/alerts - would be great

The magic of it

Anyway, here you go. And for all : please read this post https://www.mql5.com/en/forum/181241 for an explanation of centered triangular moving average

I wanna see rebound-signals in tester, so added arrows for rebound. Seems like asymmetric bands must be more applicable here, but instead of them added caution mark, which show too big TMA slope against direction of rebound 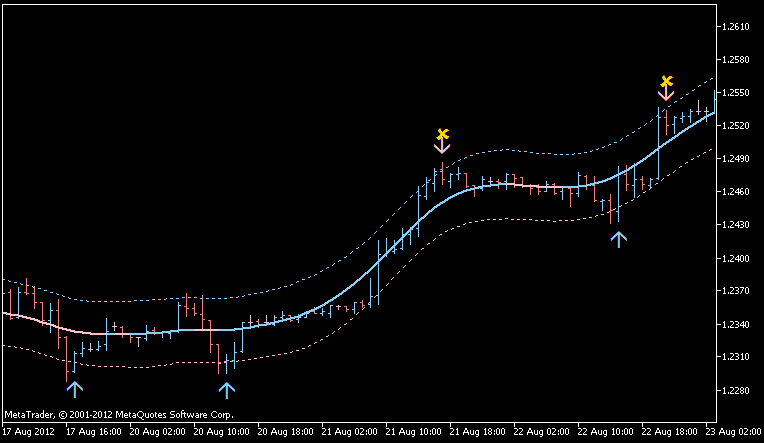 The magic of it

Anyway, here you go. And for all : please read this post https://www.mql5.com/en/forum/181241 for an explanation of centered triangular moving average

Can add multi time framing to this indicator?

And which makes the answer to the following question obvious : can it be "end-pointed" as SSA in order to make it non-repainting. The answer is yes and linear weighted moving average (LWMA) is the end-pointed centered TMA (so it is the non-repainting version of the centered TMA)

Now, that would be all. I just hope that my daily regular emails about TMA will lessen now that this is explained ... As it is obvious, it is a fairly good tool for estimation (the work of Brian Millard regarding this subject is very significant and I recommend everybody that can read his book about to do so - it might help understanding what were they after) but there is no magic nor wonder in it.

I have an interesting setup which i want to get as an EA working. The signals come from the uni_cross indi combined with the TMA. But I only have the unicross which does not compile. Could you help?

That is already a compiled file.

I have an interesting setup which i want to get as an EA working. The signals come from the uni_cross indi combined with the TMA. But I only have the unicross which does not compile. Could you help?

mladen:
wolfsch That is already a compiled file.

(my bit of english) : I meant that it would be necessary to decompile it, so it could be used for an EA.

I haope you can help me.