The key level at 44.89 was broken to above so the bullish breakout was continuing (for H1 timeframe and same for H4 for example), and 45.83 is the new bullish level: 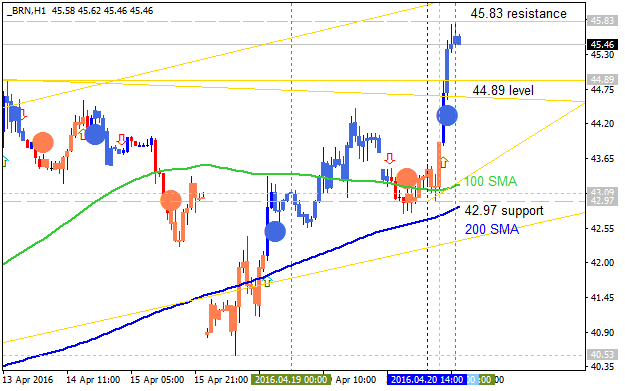 Crude Oil M5: bearish breakdown. The price broke 200 SMA/100 SMA reversal area to below to be reversed to the primary bearish market condition. Price is breaking 45.67 support level for the bearish breakdown to be continuing with 44.24 as the nearest bearish target. 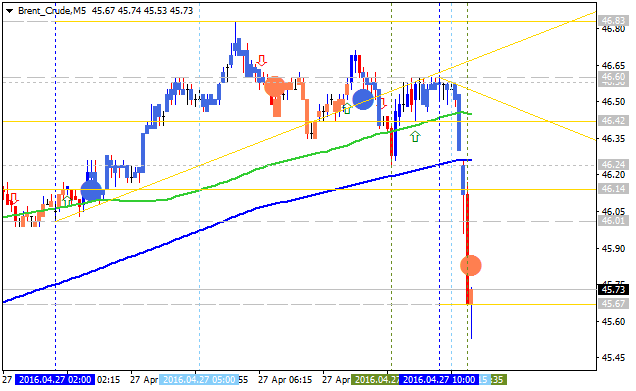 RSI indicator is estimating the correction to be continuing in the near future. 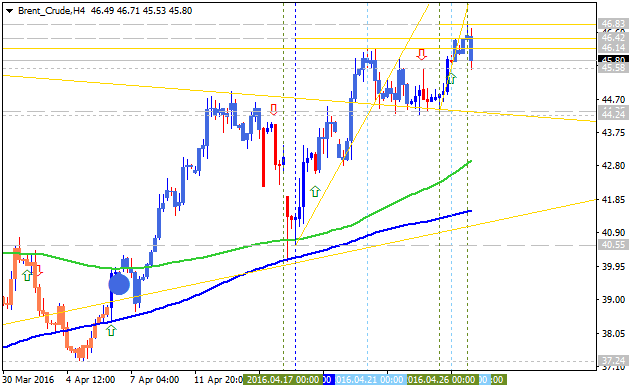 H4 price is on breakdown with the bearish reversal: the price broke key support levels together with Senkou Span line to below for the reversal of the price movement from the primary bullish to the ranging bearish market condition. 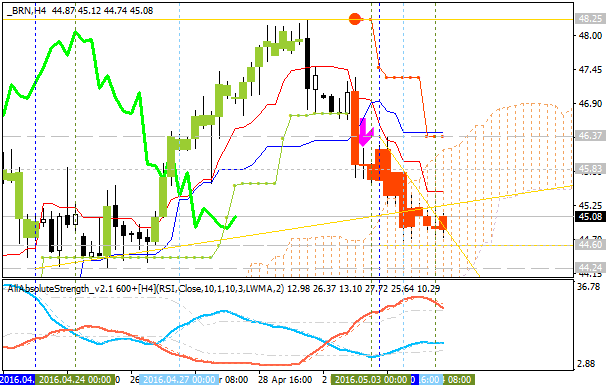 D1 price is on bullish condition located to be above Ichimoku cloud with the secondary correction to be started in the beginning of this month. 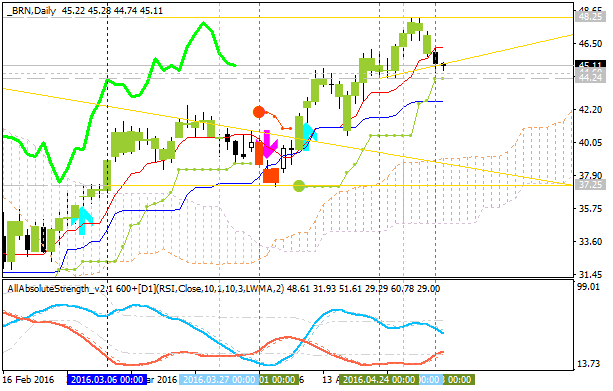 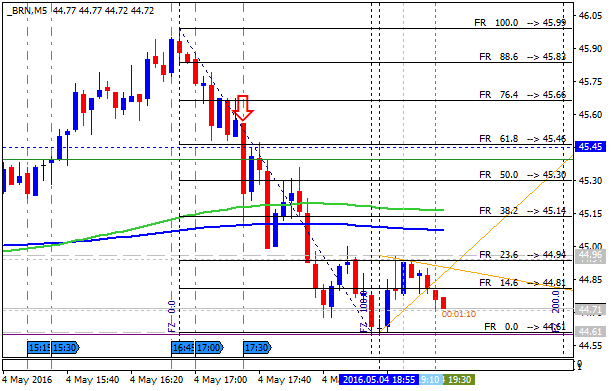 Crude Oil H4: ranging bullish. The price is located above 200 period SMA (200 SMA) for the bullosh condition and near 100 period SMA 9100 SMA) for the secondary ranging within 44.60 support level and 45.99 resistance level. The level for the bullish trend continuation without ranging is 48.25, and the level for the bearish reversal is 42.53 which is the value of 200 SMA for now. 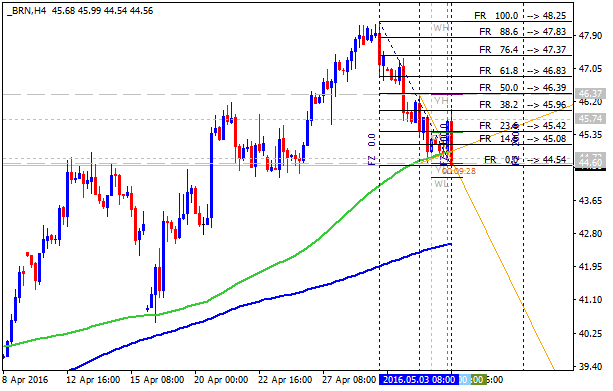 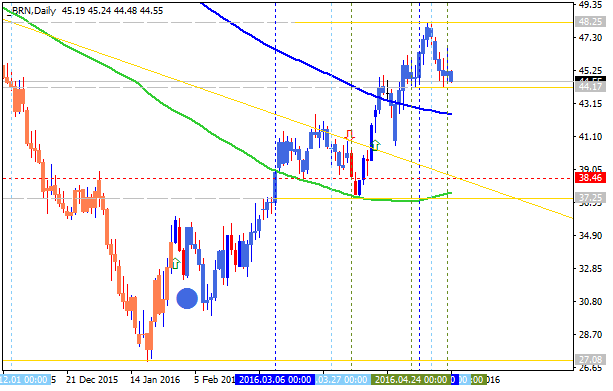 "The Support Zone in focus after Thursday’s blast-off is the Wednesday low at $43.20. Wednesday's low is above the next level of support by ~$0.70 barrel at $42.48, which is the April 26 low that printed before pushing up to $46.75 to close the month. Below $42.48, there could be a quick drop to the 200-DMA, which would take a strong move lower down to ~$40/bbl. Given the significance of the Intermarket factors that have shifted since Oil broke above $40/ 200-DMA, only a move below there would change my bullish model."

"U.S. commercial crude oil inventories (excluding those in the Strategic Petroleum Reserve) decreased by 3.4 million barrels from the previous week."

Crude Oil M5: bullish breakout. The price broke 100 SMA/200 SMA area from 45.24 to be reversed to the primary bullish market condition: price broke key levels for good breaking with 46.83 resistance to be tested for the intra-day bullish trend to be continuing. 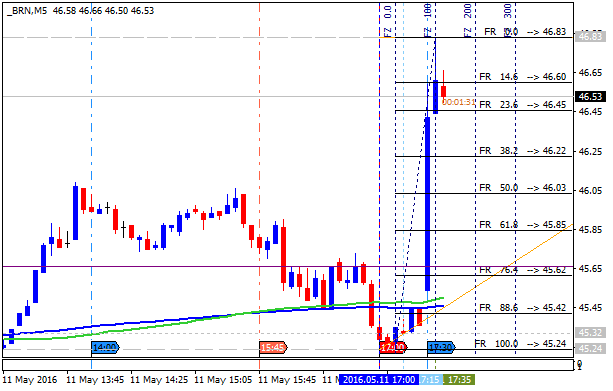 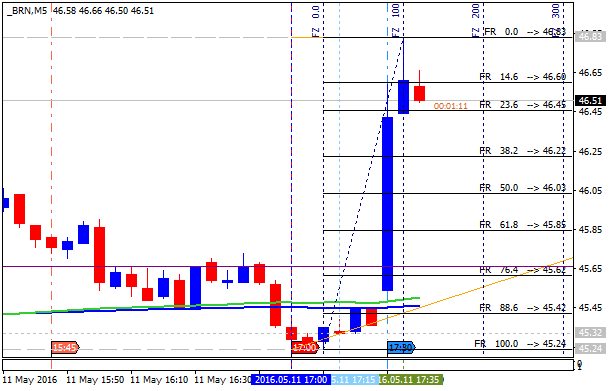 The Crude Oil is continuing with the bullish breakout in intra-day basis: the key resistance level at 46.75 is going to be broken by the price to above for the breakout to be continuing and with 48.25 as the nearest bullish target to re-enter. Anyway, the bearish reversal level is 43.30, and if the price breaks this support level to below so the bearish reversal of the intra-day price movement will be started. 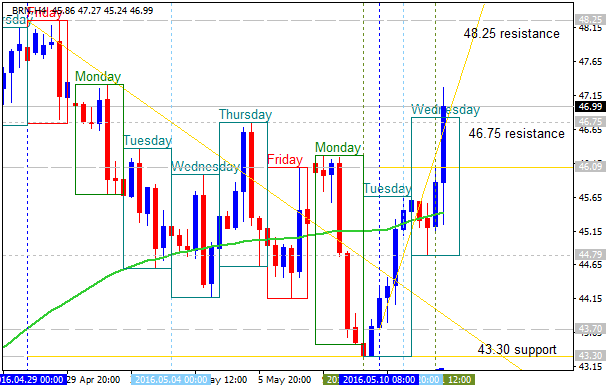 If we look at the daily price so the price came to be very close to 30-day high at 48.25, and if this level will be broken by the price to above so we may see the daily bullish trend to be continuing. 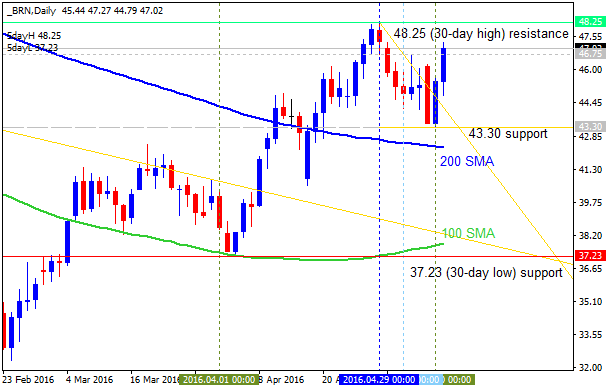 48.25 key daily/weekly/monthly resistance level is the next target. 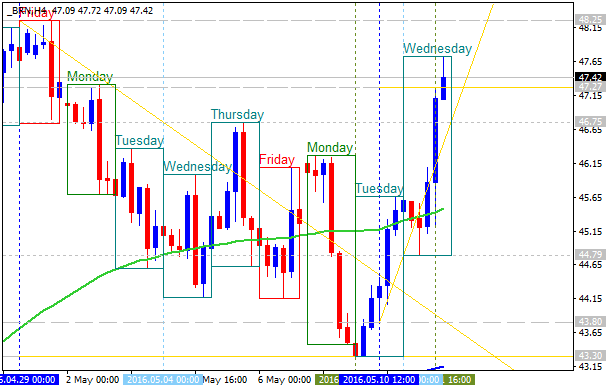 The correlation between Dollar Index and Brent Crude Oil

There is good article describing the correlation between Dollar Index and Crude Oil so let's evaluation the situation related to those prices. 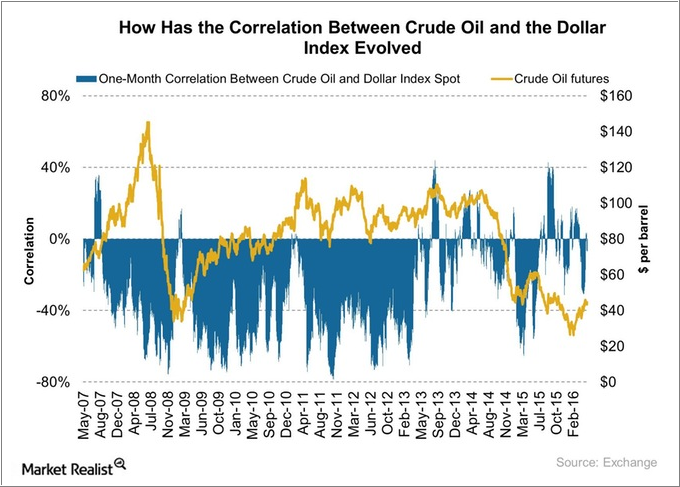 Brent Crude Oil Weekly Outlook: secondary rally within the primary bearish.
Weekly price is testing 48.25 resistance level to above for the bear market rally to be continuing with 53.95 level as the nearest target to re-enter. If the price breaks 1-year low at 69.57 so the bullish reversal will be started, otherwise the price will be on ranging within the primary bearish condition.

And for now - please look at those two charts below just to make an idea about the correlation between Dollar Index and Brent Crude Oil: 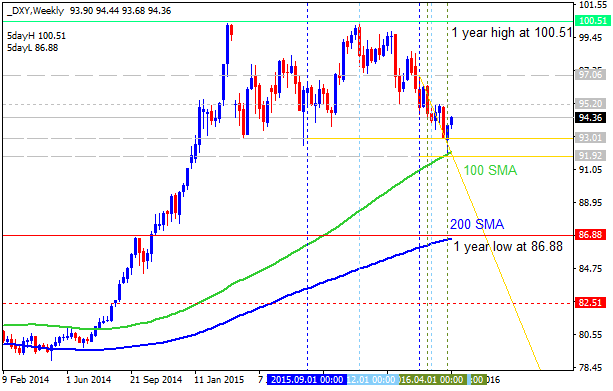 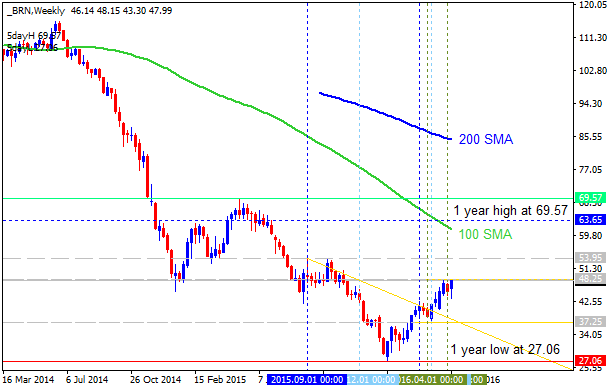 Weekly price is on bearish condition located near below Ichimoku cloud and Senkou Span line which is the virtual border between the primary bearish and the primary bullish trend on the chart. The price is on secondary bear market rally by testing 48.25 resistance level for the secondary rally to be continuing with 53.95 bullish reversal resistancer level as the next nearest target. 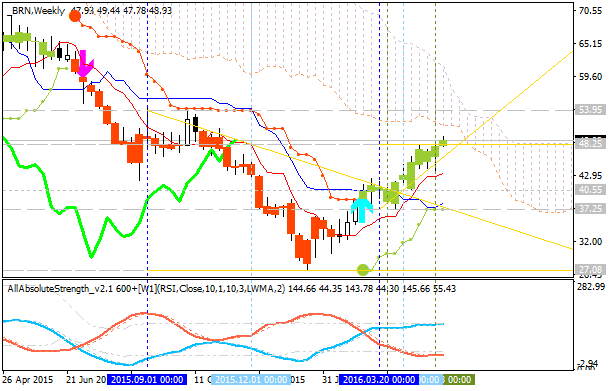