I need Expert for the Grail indic - page 2

Without the source code, you would have to back engineer the indicator.

What would be your solution?


Without the source code, you would have to back engineer the indicator.

What would be your solution?

Why do you want to back engineer the indicator. I don't get your point.


i need Expert for the Grail indic

I spoke to this man some time ago.

This indicator is copyrighted, i looked it up, so you can not include this indicator when you want to sell this strategy as an expert adviser in MQ market.

The only two solutions would be to either write a new indicator based off a similar design, and ship it with the package of the new trading expert,

Or to write one expert that has the mechanism build in and ship it as one deal.

For both solutions, the indicator's mechanism would have to be known.


I spoke to this man some time ago.

This indicator is copyrighted, i looked it up, so you can not include this indicator when you want to sell this strategy as an expert adviser in MQ market.

The only two solutions would be to either write a new indicator based off a similar design, and ship it with the package of the new trading expert,

Or to write one expert that has the mechanism build in and ship it as one deal.

For both solutions, the indicator's mechanism would have to be known.

LOL...these informations are not available in the topic I can't guess.

I was talking about technical issues, not legal ones.

Well technically speaking you also need the code if you want to create a stand alone trading expert.

I know the simplest way is to use iCustom but that will not result in a stand alone expert with the indicator baked on board.

Anyway, i did not code anything for Mr Ahmed because i found out that the expert already existed and was offered on the same webpage i found the indicator (1299$ or so)

So i simply asked him why don't you buy it there :) and i got the impression that maybe he found it too expensive and was looking for a cheaper deal.

And then told him we don't want or need to re-invent the wheel and that was that.

i have the source code for this indicator, you know how many months i tried to fix it, but with no success, this is a tough one.

i attach the mq4 code, i just want to say you need to fix it so the star appears on the current candle.

lets fix it and make it confidential.

This is good thread related -

Is it possible to develop any trading strategy to become profitable?

A good question to ask would be: where does a holy grail start ?

Many people say I am not looking for the holy grail. But they do.

If I ask in my trading room what do you expect from a system, then the vast majority says: I am not looking for a system that would make profit all the time or holy grail but a system that would produce +/- 70% hitrate and an average winning trade that is 2 x as big as a losing trade.

They don't realize that this is a holy grail.

Important is also that they wish that the winning trades and losing trades would be nicely scattered around....2 winning 1 losing...3 winning..1 losing...

Only people who done a zillion backtest on 100's of systems are fully awere what to expect from a system.

The trend following systems that have a low hitrate will ALWAYS have avg winning trades that are severall times bigger then the losing trades. But people suffer under the low hitrate. Because with these kind of systems you can have easely 10 consecutive losing trades.

On the other side of the spectrum (above 50%) you have the systems that ALWAYS have avg losing trades that are many times bigger then the avg winning trade. People like these systems at first but they complain that a couple of losing trades eat up all the profit of a nice streak of winning trades.

They think that they only need to find then a system that has the best of both worlds. And there starts their quest for the holy grail.

They don't realize or don't want to accept that EACH and EVERY POSSIBLE system is sitting or on one or the other side of that spectrum.

The middle of the spectrum is a +/- a 50% hitrate and a winning trade that is +/- equal to the losing trade.

If you deduct spread and slipage one realizes that also this is a losing system.

The trend following systems are the best to follow. But they have the tendency to perform bad over longer periods when price is not trending. And price is most of the time not trending. So people can mentally not cope with that FACT.

The systems that have high hitrates have the tendency to perform good most of the time but a few losing trades over a short period of time destroy the winners that were made over a longer period of time. People again can not cope with that FACT.

Needles to say that the 50% systems are not realy helpfull.

So one of the elements of a holy grail is what you expect from a system.

Is that making money or is that mental satisfaction....The holy grail seekers want to have both.

The only serious difference or edge you can give to a system on each side of the spectrum is the MM.

Again the vast majority does not have any clue what so ever what real MM means. Even the ones who red books about it.

They think that MM is equal to counting the losses and profits you made at the end of the day. Or beeing carefull to not be overleveraged.

Or think, if I find a realy good system then I don't need to bother about all that calculations after each trading day.

Or think , profit is profit and loss is loss, so if I can find something that makes more profits then losses then it is clear that I need to make money.

If I ask in the room at the end of the day who have placed all his trades in a spreadsheet so they can keep track of their drawdowns the R/R ratio the avg winn/loss ratio the MAX DD etc....I can be honest..no one...Reason ?..they had a couple of losing trades and they want to forget about them as soon as possible. They don't want to be confronted how bad they did that day.

Even some of the people don't have any clue what so ever how excel works. So there the MM should start but there it also stops. (I did not know how excel worked but I learned-- because I felt that it was absolutly nescessary if one wanted to trade in a professional way).

The ONLY difference or edge you can give a system where ever it is placed on each side of the spectrum, to make it more profitable, is true serious MM.

Never never never will there be a indicator that will tell you to go short on a top or to long on a bottom. Even not something that will come close to this.

If that would be possible then that indicator is a Madam soleil or cristal bal.

The moment that one accepts that he needs to work with the low hitrate but high avg winn/loss ratio or the high hitrate with the bad avg winn/loss ratio but make the difference with the MM, ONLY then he will stop his search for the holy grail and realize that he has to be patient and look to the results of trading over a long period of time. And also realize that losses are connected to trading as breathing is to life.

A lot of people would benefit a lot more from realy learn how to trade, learning how to implement MM in their trading instead of wasting all that energy in their quest for the holy grail.

And that learning is programming , develloping, backtesting, trading, calculating, studyng over charts 24/7 weekens included and this for all possible indicators, the leading indicators the laging indicators, the combination of all possible indicators, the price patterns, the overall TA, the breakout system, the trend following systems , the imaginairy systems (as eliot wave), the grid systems, the different time frames ..etc..etc...That way they would come to the conclusion that only MM and discipline makes the difference (that was at least my holy grail).

Something Interesting to Read July 2014 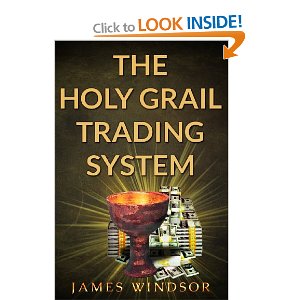 To be the ultimate 'Holy Grail' foreign exchange trading system it would have the ability to automatically trade and have zero discretion with no technical analysis or reliance on technical indicators. In short, a 100% mechanical trading system in which the person using it does not matter, the result will be the same.

It would be a currency trading system that takes away the problems of trading psychology. It does not care if you are having a bad day, are on holiday, or if you have had an argument with your partner in the last hour. The trading entries, exits, trailing stops and risk management must have no user input whatsoever. All the user has to do is switch it on and wait.

The trading forums of the internet are full of people searching for this ultimate trading system. Thousands of traders every day search, test and simulate for hours using forex analysis looking for this 'golden egg' laying goose. Most believe that such a trading strategy does not exist nor ever has. This book is here to prove to you that such a trading system did exist and was discovered by a few home based forex traders just like you.

It can be found again.

Here is our question to you.

"What would you do if you found such a simple day trading system?" One that worked month after month? One that had proved itself not just for weeks or months, but for years?

Well, Not only does this trading book tell the story of how the trading system was built, it also gives you the full trading system and strategy, for the very first time.

The actual Forex trading methodology has remained a closely guarded secret for over 10 years! For the first time ever nothing is held back,

Could you be the next trader to find a Holy Grail system? The clues are all here.

What changes you should be wary of when trading your forex strategies
What happens to your mind when all of your hard work comes together - the trading psychology
What happens when everything looks wrong
The true reason for a trading system failing (hint: it mostly isn't the system)

Their very personal story unfolds within these pages, step by step and month by month, demonstrating how their discovery changed them forever. With full disclosure for the very first time this book shows every trade, every change, every high and every low of a Forex trading system called simply 'Grail'

Who Should Buy This Book?

I'm sure the subject line of this video raised a few eyebrows! But let me ask you a question: If you looked at some of the most consistently successful traders in history -- people who have made incredible amounts of money over and over -- would you consider them to have found the Holy Grail? Would it help you to know their "big secret"?

The answer should be obvious, but here's the problem: "knowing" is one thing, "doing" is quite another. This video may offer you some contrasts that will help you in clearing obstacles that could be inhibiting your progress.