Discussion of article "Bi-Directional Trading and Hedging of Positions in MetaTrader 5 Using the HedgeTerminal Panel, Part 1"

New article Bi-Directional Trading and Hedging of Positions in MetaTrader 5 Using the HedgeTerminal Panel, Part 1 has been published:

This article describes a new approach to hedging of positions and draws the line in the debates between users of MetaTrader 4 and MetaTrader 5 about this matter. The algorithms making such hedging reliable are described in layman's terms and illustrated with simple charts and diagrams. This article is dedicated to the new panel HedgeTerminal, which is essentially a fully featured trading terminal within MetaTrader 5. Using HedgeTerminal and the virtualization of the trade it offers, positions can be managed in the way similar to MetaTrader 4.

Within the last 18 months MetaQuotes have conducted extensive work on consolidating the MetaTrader 4 and MetaTrader 5 platforms into a unified trading ecosystem. Now both platforms share a common market of program solutions - Market, offering different products from external developers. The compilers for both platforms were united as well. As a result both platforms have a common compiler based on MQL5 and one programming language - MQL with a different function set depending on the platform in use. All publicly available source codes located in the Code Base were also revised and some of them were adjusted to be compatible with the new compiler.

This major unification of the platforms left aside the unification of their trading parts. The trading models of MetaTrader 4 and MetaTrader 5 are still fundamentally incompatible despite the fact that the major part of the trading environment is shared. MetaTrader 4 facilitates individual management of trading positions through the system of orders - special program entities making the bi-directional trading in this terminal simple and easy. MetaTrader 5 is intended for the exchange trade where the main representation of a trader's obligations is their aggregate net position. Orders in MetaTrader 5 are simply instructions to buy or sell a financial instrument.

The difference between the trading performance of these two platforms caused a lot of heated discussions and debates. However, discussions remained discussions. Unfortunately, since the release of MetaTrader 5, not a single working solution was published that could enable presenting a trader's obligations as bi-directed positions like in MetaTrader 4. Although numerous published articles suggest various solutions, they are not flexible enough to be conveniently used on a large scale. In addition, none of those decisions are suitable for the exchange trading, which involves a lot of nuances that have to be taken into consideration.

This article should settle the controversies between the fans of the fourth and the fifth versions of the MetaTrader platform. This is going to provide a universal solution in the form of thorough program specification and the exact program solution implemented by this specification. This article discusses a visual panel and the virtualization library HedgeTerminal, which enable presenting a trader's obligation as bi-directional positions like in MetaTrader 4. At the same time, the model underlying HedgeTerminal takes into account the character of the trading orders execution. That means that it can be successfully implemented both at the over-the-counter market FOREX and centralized exchanges like, for example, trading derivative securities in the derivatives section of Moscow Exchange.

On the whole, formation of the exchange price is more complex and contains a lot of significant details hidden when trading Forex and in the MetaTrader 4 terminal.

There are other situations when extended representation of the trading environment in MetaTrader 5 requires additional efforts to analyze this information. That prompts logical questions:

Is there a way of making the trading process in MetaTrader 5 as simple and clear as in MetaTrader 4 and keep a convenient access to all required trade details? If there is a way to arrange bi-directional exchange trading using MetaTrader 5 the same simple way as MetaTrader 4? - The answer to those questions is: "Yes, there is"!

Let us refer to the diagram of capabilities of the MetaTrader 4 and MetaTrader 5 terminals to understand how this is possible: 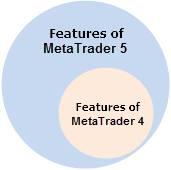 
New article Bi-Directional Trading and Hedging of Positions in MetaTrader 5 Using the HedgeTerminal Panel, Part 1 has been published:

Thank you very much for the Article.