This Expert Advisor will simplify the manual trading. It supports the One-Click trading.

This is my work and Last version to Download:https://www.mql5.com/ru/code/223

The Flaw in Trailing Stops

Trailing stops are a more advanced type of stop loss order that adjusts itself to a more favorable rate as a trade moves in our favor. The result is a reduced stop loss (reducing risk) that is based solely on how price moves. It is at that moment that a traditional trailing stop shows its flaw. The stop moves to a level based on how far a trade moves in our favor, rather than moving based on key price levels. All support and resistance analysis previously performed is thrown out the window as our stop moves freely to a random level X pips away from the currency pair’s high water mark.

Therefore our stop we set beyond the most recent swing low will suddenly move to a level above the swing low and be at much greater risk of being hit by a sudden downward whipsaw.

Trailing Stop Getting Whipsawed on USD/CNH :

So what can we do about trailing stops’ tendency of getting stopped out too early, but still have the benefits of reducing our risk during the life of our trades? The secret is in manually trailing our stop losses ourselves, always basing our stops around support and resistance levels along the way. A rare example of having your cake and eating it too. Let’s take a look.

Manual Trailing Stop in an Uptrend : 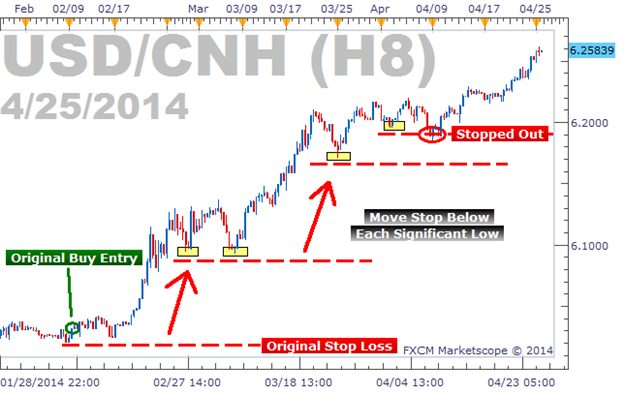 The image above shows the same trade we placed on the USD/CNH, but with much better results. Rather than using a traditional trailing stop that blindly moved up as price moved up, we moved our stop only when a new swing low was created. We set our stop below each new swing low as price progressed and were able to ride this monster uptrend 1500 pips before being stopped out.
It can take some time to be able to “eyeball” significant swing highs and lows and know exactly when a stop should be moved.

Some settings will create less fractals than the traditional version due to the stipulation that the candle’s high or low price must be higher or lower than the previous 5 candles and the following 9 candles. Now that we see the asymmetric fractals on our charts, we can see their value immediately. Each time we see a fractal, that is a level where we could manually move our stop since it is a significant swing high or swing low. I’ve overlaid our fractals on to our USD/CNH chart used earlier to show how our manual trailing stop moved almost 100% in sync with the fractals created over the same period: 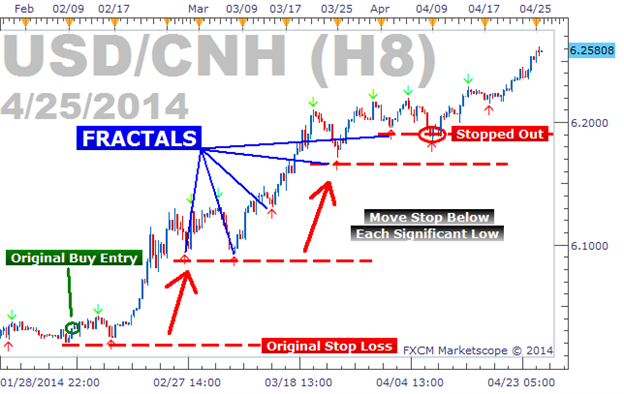 The Buck Stops Where?

Hopefully, this article has given us a better way to trail our stops. We always want our stop to be beyond the most recent swing high or swing low, and the asymmetric fractals can help identify those levels.

How to Use a Trailing Stop
vanced type of stop loss order that can reduce the risk on your trade as the trade progresses. It does this by adjusting itself to a more favorable rate as a trade moves in a trader’s favor. While this type of order is not necessary knowledge to becoming a successful trader, trailing stops have applications in various trading techniques and...
Learn how to design Indicators: X-bars Fractals How to Start with

This is my work and Last version to Download:https://www.mql5.com/ru/code/223

Its not working anymore?