Euro Drop to $1.20 Seen by Nomura on No Crisis: Chart of the Day

The euro will weaken more than 5 percent against the dollar by June in a slide that option traders forecast will be slower than the tumble during Europe’s debt crisis in 2012, according to Nomura Holdings Inc. 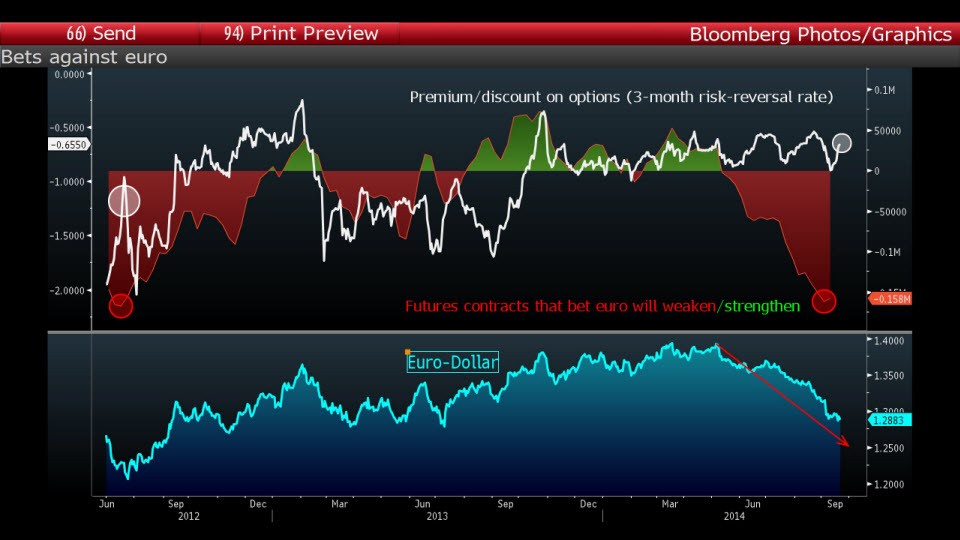 The CHART OF THE DAY shows that hedge funds and other large speculators boosted wagers this month on the euro’s drop to the most in more than two years, based on the weekly Commodity Futures Trading Commission data. It also tracks options pricing that’s much less bearish, with risk-reversal rates little changed this quarter, signaling expectations for gradual declines.

Nomura predicts the shared currency will fall to $1.20 by mid-2015 as the European Central Bank signals further monetary stimulus that tends to weaken the currency, while the Federal Reserve stays on course to end bond purchases next month. The euro dropped more than 7 percent this quarter to $1.2684 on Sept. 26 in New York.

“People are expecting euro weakness, but not a precipitous fall,” Yunosuke Ikeda, Nomura’s Tokyo-based head of currency strategy, said by phone on Sept. 25. “This time, the theme is widening interest-rate differentials between the U.S. and Europe, not a crisis.”

Traders are using options strategies to bet on a measured decline in the euro, limiting the impact on the risk-reversal rate, according to Ikeda. The premium of 71 basis points on options to sell the euro over those to buy is half the level seen the last time futures traders were this bearish in July 2012, the month when the euro slid to a two-year low of $1.2043. The difference in cost between put and call options is called the risk-reversal rate.

The flood is going on. Interest rates difference is doing its job - traders could not care less about the economy. All they care about are interest rates. As always

The euro dropped quite a lot against the dollar in 2014. What’s on the road ahead for the upcoming 2 years?

The team at Citi take a long term view:

CitiFX Technicals is out with a very interesting long-term chart for EUR/USD suggesting that the pair should find some initial support in the 1.22 area and pointing to 2 long-term targets for the pair’s downtrend:

In its portfilio, Citi maintains short EUR/USD targeting 1.22 and below. 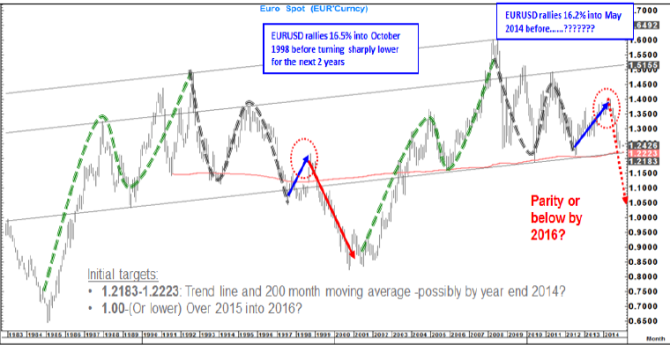 To be honest it isnt a huge jump over time. But enough to make some people a huge amount of money

Where To Sell EUR/USD? Morgan Stanley

Entering the ECB meeting, there is a lot of pressure on the euro. So, if you opt to sell, what levels should you be looking at?

Morgan Stanley picks EUR/USD as its FX chart of the week where MS is bearish on the pair and is looking to sell. MS gives some insights on the levels at which traders should sell the pair and place their stops.

“Breaking below 1.28 in recent months meant that EURUSD broke a trend line formed since 2001, providing a stronger bearish signal (chart). EURUSD is currently in a C-wave beginning from a peak of 1.3993 in May. We expect EURUSD to trade below the A-wave bottom at 1.2043,” MS projects.

You Missed the Chance to Buy the Dollar, Technicians Say

Anyone who was waiting until after today’s U.S. employment report to get in cheaply on the dollar rally probably blew that chance.

Trading patterns were showing as recently as three days ago that the five-month rally that has taken the greenback to multiyear highs against many of its counterparts was losing momentum and strategists were saying gains would slow with the absence of any additional catalysts before year-end. Those same measures are now suggesting that the dollar’s ascension into 2015 is looking unchallenged.

“People had thought we’ll get some pullbacks in the dollar and we’d get some better levels to buy,” Niall O’Connor, a technical analyst at JPMorgan Chase & Co. in New York, said by phone. “The price actions today have been impressive. We see a higher risk we can extend” through further levels.

The dollar is heading toward its best year in almost a decade as the world’s biggest economy is forecast to outgrow every Group-of-10 nation in 2015 in the face of an increasing prospect of deflation in euro area, a Japanese recession and a China-led emerging-market slowdown. Firms from Goldman Sachs Group Inc. to Morgan Stanley have said investors should make use of any setbacks to accumulate dollar positions.

The U.S. added 321,000 jobs in November, while the unemployment rate held at a six-year low of 5.8 percent, Labor Department data showed. The gain exceeded the most optimistic projection in a Bloomberg survey of economists.

Is US Dollar become too strong?

Not yet. This time it is not just FED controling the US Dollar strength and no BRICKS member would like to see weak dollar. The as a first result : oil fracking is too expensive - petro dollar becoming a strong weapon - but not in the expected direction (expected by FED)

The common currency lost a lot of ground to the greenback in recent months, in a gradual yet consistent grind lower. Can it extend its falls and hit even lower ground.

The team at SocGen discusses the potential downside and what does keep the euro bid:

EUR/USD is on its way to below 1.20 for the first time in a decade, projects SocGen.

“Transatlantic monetary policy divergence is making its presence felt, with negative ECB deposit rates particularly potent when it comes to driving money out of the euro. A weaker currency will also be the main impact of ECB sovereign QE in Q1,” SocGen adds.

So why not to parity? Will it collapse after?

“…Arguably, the Rates/FX link has been re-established after a troubling break at the turn of 2013-2014. EUR/USD is even overshooting to the downside and that is how it should be now that the ECB plans a bolder expansion of its balance sheet,” SocGen adds.

1- Large currency moves would make the Fed more cautious. That should be a selfcorrecting mechanism.

2- Positioning is already extreme, which should limit EUR downside.

3- The euro’s basic balance (current account, portfolio flows, FDI) has reached new record highs, at some €370bn over the past 12 months…Historically, that has been a strong driver of the euro . This no longer holds true but can’t be ignored entirely.

The euro managed to stage a recovery, but there are doubts if this can continue.

The team at Deutsche Bank looks into 2015, explains its rationale for the next moves and sets quarterly targets:

Near-term, Deutsche Bank thinks that the recent pause in EUR/USD drop could extend into year-end with market positioning very extended, real yield fair value still in the high 1.20s, and ECB expectations running ahead of what was delivered at its December meeting last Thursday.

Going out to next year, DB sees more downside to the currency with the risks being skewed to greater, rather than lesser weakness. DB outlines 3 reasons behind this view.

First, ECB QE remains our baseline most likely delivered in January. The intended effects are likely to be larger and more protracted than equivalently-sized policies in the US or Japan due to the presence of negative rates.

Second, we expect Fed rate lift-off to materialize over the course of H2, with the dollar historically showing a strong appreciating trend into the first central bank rate hike.

Finally, we believe next year will mark the beginning of broader capital flow shifts into the US fuelled by persistent growth and increasing monetary policy divergence.