actually that site was SOMETHING...you could see visually in real time how many bitcoins or fractions of it, travel to which country at what price...mostly they were going to CHINA, USA and RUSSIA...USA & RUSSIA was about the same but CHINA was taking like 1000 times more!...

No wonder they killed it. Money laundering never likes witnesses

Just goes to show that if you create demand(for any thing) then people will buy any old crap.

42% Of Americans Know What Bitcoin Is

While 6% believe Bitcoin is an "Xbox game", we are impressed that 42% of Americans polled by Bloomberg know what the virtual currency is. Furthermore, 55% believe it is "not better" that Bitcoin be regulated... 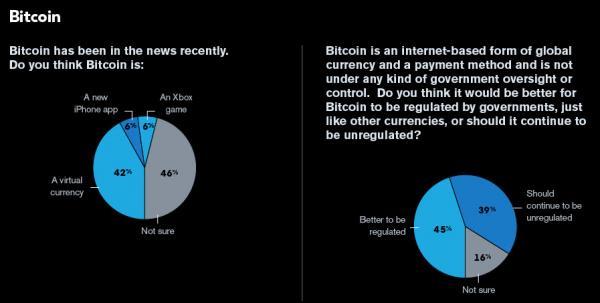 Bitcoins were dealt a blow in Norway as the government of Scandinavia’s richest nation said the virtual currency doesn’t qualify as real money.

“Bitcoins don’t fall under the usual definition of money or currency,” Hans Christian Holte, director general of taxation in Norway, said in an interview. “We’ve done some assessments on what’s the right and sound way to handle this in the tax system.”

Norway will instead treat Bitcoins as an asset and charge a capital gains tax, after Germany in August said it will impose a levy on the virtual currency.

More and more nations are taking an official stance on the software since it emerged in 2008 as a virtual currency that’s not controlled by any government or central bank. Bitcoins can be used to pay for everything from hand-made rugs to window cleaning. Students at the University of Nicosia in Cyprus can even pay for their tuition with the software.

Paul Ehling, associate professor in the department of financial economics at the BI Norwegian Business School, said the government’s definition of money may be too narrow.

“Currency is any agreed upon means of exchanges of goods and services, so you could have some small stones, as used in history, and if it’s accepted by a sufficiently large population, then that’s enough,” Ehling said in an interview. “These days we do mean that a much larger group of people is willing to exchange goods or services for this currency.”

Press review Germany plans tax on Which strategy is best

Representing numbers that would put the adoption curve of Obamacare to shame, the Bitcoin equivalents of Paypal, BitPay, announced last week that it has now processed over $100 million in BTC transactions in 2013, has increased its merchant base to over 15,500 approved merchants in over 200 countries, but most importantly, has seen a surge in the number of merchants using its BTC payment pricing plan, by 50% since October while the volume of transactions has tripled. While the surge in the currency adoption has matched the explosive rise in the USD-value of the currency, the news should comfort any lingering doubts whether Bitcoin is a credible payment system.

From the BitPay press release:

BitPay Inc, the world leader in business solutions for virtual currencies, announces it has processed over $100 million in transactions this year, and has increased its merchant base to over 15,500 approved merchants in 200 countries. Since the announcement of the new All Inclusive Pricing Plan in October, along with the integration with Shopify in November, the number of new merchants has increased over 50% and the transaction volume has tripled.

"This year, the 2013 holiday season was Adafruit's biggest ever. We are delighted to offer bitcoin payments via BitPay to our community and customers. It was fast and easy, hundreds of orders and happy customers getting educational electronics, using bitcoin!" shared Limor Fried, Founder and Engineer with Adafruit.

Bitcoin has "clear potential for growth and could become a major means of payment for online transactions” a Bank of America analyst told CNBC. As the number of Bitcoin users continues to increase, merchants such as Adafruit, BTCTrip, Alliance Virtual Offices, and Clearly Canadian, see the value of working with BitPay to help expand their business.

Which explains why Europe, which over a year was the first entity to cry foul about Bitcoin (recall from November 2012: "The ECB Explains What A Ponzi Scheme Is; Awkward Silence Follows") when the USD-price of one BTC was still in the double digits, is doubling down in its fight against the fiat alternative, this time as the European Union's top banking regulator is preparing to actively supervise the virtual currency. From Bloomberg:

Trading Bitcoins could bleed you dry, the European Union’s top banking regulator said as it weighs whether to regulate virtual currencies. Thefts from digital wallets have exceeded $1 million in some cases and traders aren’t protected against losses if their virtual exchange collapses, the European Banking Authority said today in a report warning consumers about the risks of cybermoney.

Virtual currencies such as Bitcoin have come under increased scrutiny from regulators and prosecutors around the globe. China’s central bank barred financial institutions from handling Bitcoin transactions last week and German police arrested two suspects in a fraud probe into illegally generated Bitcoins worth 700,000 euros ($963,000).

“The technology is still relatively immature and lacks the infrastructure, regulation and understanding of the risks that are taken for granted in conventional financial systems,” Matt Rees, assistant director at Ernst & Young LLP, said in an e-mail. “It is not surprising then that thefts, frauds and other deceptions are currently commonplace.”

Since Bitcoins exist as software, the virtual currency isn’t controlled by any government or central bank. The digital money emerged in 2008, designed by a programmer or group of programmers going under the name of Satoshi Nakamoto, whose real identity remains unknown.

The virtual currency gained credibility last month after law enforcement and securities agencies said in U.S. Senate hearings that it could be a legitimate means of exchange. The price of Bitcoins topped $1,000 as speculators anticipated broader use of digital money.

Press review Bitcoin worth $72 million Forecast and levels for

I think someone is going to shut down Bitcoin party soon.

Still one of the best thing that ever happened.......the only prob at the moment is knowing when to sell.....

Talk from the PBOC (via Sina) that "the central bank directs: third party payment institutions shall not undertake business with Bitcoin hosted sites," appears to be responsible for the slump in the virtual currency once again. This expands the PBOC's earlier Bitcoin ban to other institutions. Bitcoin prices have dropped over 20% from their overnight highs - trading at around $715 now. Perhaps even more notable is the relationship between Bitcoin and the precious metals today with the early Bitcoin weakness corresponding almost perfectly to gold and silver strength (and again mid-morning in the US). 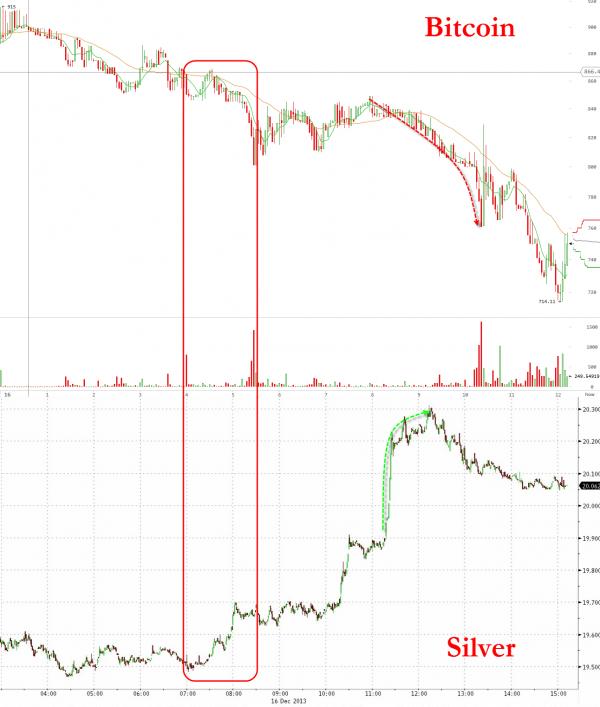