Why China wants to dominate Bitcoin

China is quietly positioning itself to dominate the brave new world of Bitcoin.

Until recently the digital cyrptocurrency was considered a joke by the financial mainstream, but the view is starting to shift now that prices have surged above their April peak and are now hovering around $600.

Bitcoins are still being viewed cautiously by lawmakers and regulators in the United States. In fact, there are two Senate hearings this week about the risks Bitcoin poses. But that is decidedly not the case in China. There has been a steady drumbeat of positive news in the Chinese press this year, including a landmark report on CCTV, China's national television network.

China's fascination with the currency upstart resulted in an estimated 40,000 client downloads a day and a burgeoning acceptance rate from online retailers down to physical traders standing in Tiananmen Square.

The largest Bitcoin exchange in the world is located securely inside China, and one of the world's largest Internet companies, Baidu (BIDU), is integrating and using Bitcoin. It seems highly unlikely that Baidu would be able to integrate Bitcoin payments across its vast network of users without some sort of complicit nod from higher authorities.

Crypto market vs Forex Bitcoin Forecast and levels for

It went up to 900 and then fell to 500. Some people are getting skinned

Bitcoin Or A Bank? Here's How They Stack Up

The following graphic was put together by the folks at Promontory Financial and is extremely telling. It looks at three ways in which a U.S. citizen might choose to go about sending a $1,000 downpayment to Europe for the purpose of renting a vacation home. They put Bitcoin side by with with a traditional bank wire as well as a credit card transaction. The results might surprise you...

The price of the digital currency bitcoin soared above $1,000 for the first time on Wednesday, extending a 400 percent surge in less than a month that some see as a growing bubble in an asset that is still a mystery to many.

Bitcoin hit a high of $1,073 on Tokyo-based exchange Mt. Gox, the best-known operator of a bitcoin digital marketplace, compared with just below $900 the previous day.

At the beginning of the month, bitcoin, a prominent digital currency that is not backed by a government or central bank, traded at around $215. The spike in its price has some believing that it has become overvalued in a short period of time, owing to its limited supply and increasing demand.

"A narrow asset class and lots of liquidity is the perfect environment for a rapid burst up in value, and then corrections," said Sebastien Galy, a currency strategist at Societe Generale in New York.

Bitcoin trades 24 hours a day, every day. The supply of the currency, which is "mined" by solving math problems, is limited, and recently stood at 12 million bitcoins, worth about $12.9 billion at recent prices.

Bitcoin is not backed by physical assets and is not run by any person or group. Its value depends on people's confidence in the currency. It has been gaining acceptance by the general public and investment community but has yet to become an accepted form of payment on the websites of major retailers such as Amazon.com.

Earlier in the month, the U.S. Senate held a hearing on virtual currencies, with some officials expressing concern that it is notable for its use in criminal activity and that there is a lack of regulatory oversight.

Do you feel comfortable Press review Forecast and levels for

Despite the US being largely on holiday, the demand for digital currencies continues to surge. Bitcoin has rallied another 10% overnight as Chinese appetite for alternative stores of value remains unabated (BTC China is nearing its record highs) as USD/BTC is trading at $1170 - on its way to crossing the Maginot line of gold's spot price (within a few hours at this pace). Bitcoin though has nothing on its smaller cousin Litecoin which has now run from $1.11 to over $48 in the last 5 weeks. In fact, almost every crypto-currency in the world - from Infinitecoin to AnonCoin is surging... with only the ironically named PhoenixCoin (-68% overnight) not rising from the flames of fiat torment. 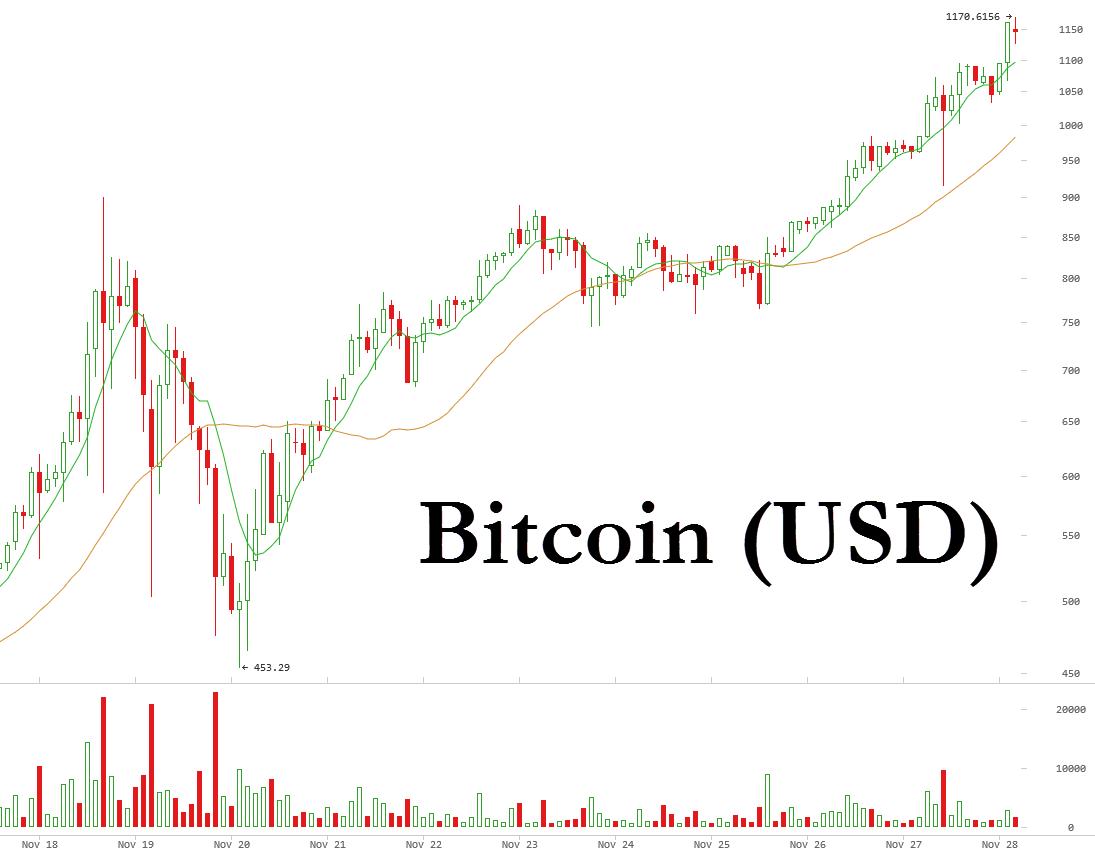 Getting close in China...

Artificial money creation - but it is not an invention of bitcoin and similar (see what FED and ECB are doing). It was expected - money laundering will never stop

It looks overvalued. But even if this digital currency crashes, others will follow

BITCOIN is booming. Investors are piling into the digital currency, which is not issued by a central bank but is conjured into being by cryptographic software running on a network of volunteers’ computers. This week the price of a Bitcoin soared to above $1,000, from less than $15 in January.

Having long been favoured by libertarians, gold bugs and drug dealers, Bitcoin is attracting some surprising new fans. Germany has recognised it as a “unit of account”. Ben Bernanke, chairman of the Federal Reserve, told a Senate committee on virtual currencies that the idea “may hold long-term promise”. A small but growing band of shops and firms accept payments in Bitcoin. Some like the way it allows funds to be transferred directly between users, without middlemen. Others are attracted by the potential for anonymous transfers, or by the fact that the number of Bitcoins in circulation has a fixed upper limit—so there is no way a central bank can inflate their value away by issuing more.

But the recent price surge, driven by Chinese investors stashing money offshore, looks like a classic bubble. Hoarding means that Bitcoin is currently more of a speculative asset than a currency. And a crash is not the only risk Bitcoin users face. As the price rises, Bitcoin theft is increasing, both from individuals and from online exchanges that store the coins and convert them into other currencies. Around $1m in Bitcoins was recently stolen from BIPS, a European exchange. GBL, a Chinese Bitcoin exchange, abruptly vanished in October, taking $4.1m-worth of deposits with it.

The system itself is straining at the seams (see Technology Quarterly). The amount of computing power consumed by its transaction-verification system, which has the side-effect of “mining” new Bitcoins, is mushrooming: it now far exceeds that of the world’s 500 fastest supercomputers combined. At the same time Bitcoin’s method of recording and processing transactions, and compensating those who verify them, is becoming unwieldy. Adjusting Bitcoin’s protocols, however, requires getting the volunteers who maintain its software to agree on the necessary changes, and the Bitcoin community to adopt them, before anything goes wrong.

Excitement about Bitcoin, and concerns about its limitations, have prompted the emergence of many other cryptocurrencies, or altcoins. Litecoin, for example, retains Bitcoin’s limited money supply but offers faster transactions and is intended to prevent a computational arms-race among miners. And whereas Bitcoin was created by a mysterious figure known as Satoshi Nakamoto, who vanished in 2010, Litecoin’s creator, Charles Lee, makes no secret of his identity. Peercoin has no money-supply limit, built-in inflation of 1% and a more energy-efficient mining process, though, as with Bitcoin, its creator is unknown. Anoncoin and Zerocoin, meanwhile, strive for complete anonymity—which Bitcoin lacks. And so on.

Press review Forecast and levels for Do you feel comfortable

A surge in Chinese demand underlies bitcoin's astronomical rise over the past few months—the alternative digital currency topped $1,200 early Friday—underscoring the nation's interest in digital currencies as alternative investments, but the question lingers: is it only a matter of time before the government steps in?

According to independent pricing site Bitcoin Average, China now accounts for 62 percent of global market volumes. The surge in demand recently led China-based BTC China to overtake Mt. Gox as the world's the largest bitcoin exchange by volume as the bitcoin craze continues to gather pace.

"China has a culture that is already acclimated to the use of digital currency, so it's not surprising that it has been quick to embrace bitcoin," Patrick Murck, founder and principal of the Bitcoin Foundation, told CNBC.

While the 30-fold rise in the volume of yuan-based bitcoin trades over the last two months underscores China's interest and helped to push the value of bitcoin above $1,000 Wednesday for the first time on the Mt. Gox exchange, buyers beware: Beijing has taken steps to rein in virtual currencies in the past.

In 2009, the government introduced legislation banning the use of digital monies to purchase tangible goods. The laws were aimed at curbing enthusiasm toward Q Coin, a digital currency used on Tencent's web-based instant messaging service called Tencent QQ. While Q Coin was initially used for the purchase of online games, it quickly spread into mainstream marketplaces.

It was only a matter of time before the success of Bitcoin led to a new attempt to create a digital currency backed by gold. It seems as if that day has now arrived.

Douglas Jackson is the founder of e-gold, which was shut down by U.S. authorities a little over five years ago under accusations of money laundering. While I fully think the ultimate monetary solution will be a decentralized payment protocol that merges Bitcoin-like technology with the ability to back it with gold, silver or whatever people want, I am of the view that it cannot be done from an overly centralized authority or protocol. There are several reasons for this.

First, when you have a centralized single issuer of a currency who also is responsible for vaulting the gold within the payment system you have an enormous degree of counter-party risk.The vault itself could be seized by “authorities” in whatever jurisdiction it is located in.

Second, the human beings or company behind any currency system can themselves be pressured or threatened in order to comply with more powerful interests. The beauty of Bitcoin is that there is no “Bitcoin corporation.” It truly is decentralized and anarchic in nature. It basically puts “the powers that be” in a position that if they want to completey destroy it, they’d have to destroy the internet itself.

That said, I do believe the evolution of money is headed to a Bitcoin type system with the ability to have whatever backing is desired by the market. So at this point my questions to Mr. Jackson would be:

1) How decentralized is this currency system intended to be if at all?

2) Will there be an open source protocol available to all?

3) Are the units of currency distributed to those that own gold in a particular vault or vaults under a the custodianship of a particular company?

4) Is the currency limited to those who own gold in the currency issuer vaults, or will they be linking vaults all over the world if such vaults care to be linked.