Metaquotes has not announced anything similar to "being forced to drop MT4". They will never forced anything, think about it.

Will be enough already to cry. Trust not words, but the facts


The word is, they cannot stop servers within 6 months or a year without a fool-proof migration program for million users. And AFAIK they do not have such a program. There is neither any message from MQ they would stop the MT4 servers, so I wonder how you come to that 6 months or a year estimate.

I didn't estimate anything. I just make a question to myself and I said nobody knows when, but it is obvious that sooner or later it will happen. In January of 2016 neither anybody thought that they would stop the support to MT4 during this year nor they had said anything about it.
By the way, they have a program to migrate all MT4 to MT5 accounts including all trading history and currently open positions. Brokers who bought MT5 license have a tool for migrating their customers' accounts. Regards.
Why is it better Is it possible for Can't open demo account(s)

That's interesting, so they are updating it, I'm still at build 1010.

Big changes for MT4, Bonuses and how they Webmoney Alternative withdrawal payments

16852
Keith Watford: That's interesting, so they are updating it, I'm still at build 1010.I'm still not aware of any announcement from metaquotes on this forum. You would have thought that they would have made some sort of announcement here.

Alian did inform me here, that it was announced by MetaQuotes that MT4 will no longer be developed, but he did not provide a link and I can't find it either!

Also, build 1019, was downloaded via the MetaQuotes trade servers. On my brokers connection, it is still at build 1010 as well!


Alian did inform me here, that it was announced by MetaQuotes that MT4 will no longer be developed, but he did not provide a link and I can't find it either!

Also, build 1019, was downloaded via the MetaQuotes trade servers. On my brokers connection, it is still at build 1010 as well!

This was announced, informally, several times on Russian forum.

It was also said by the Service Desk on some answers, but I can't provide it as it's private.

What was announced is no more new development, it was never said there will not be any update for bug or security fixes. (Which I suppose is what is done in build 1019, to confirm).

By the way, don't forget build from Metaquotes-Demo server are beta version, use it at your own risk. Maybe they are just introducing some bugs to accelerate the switch to MT5 (It's a joke, just in case).

i have no connection Missed signal trades Why are the MT4


That's interesting, so they are updating it, I'm still at build 1010.

They didn't say anything on this forum, but they (concretly, Anthony Papaevagorou, Head of Sales at MetaQuotes) did in a recent presentation at the Finance Magnates London Summit. Here the link: 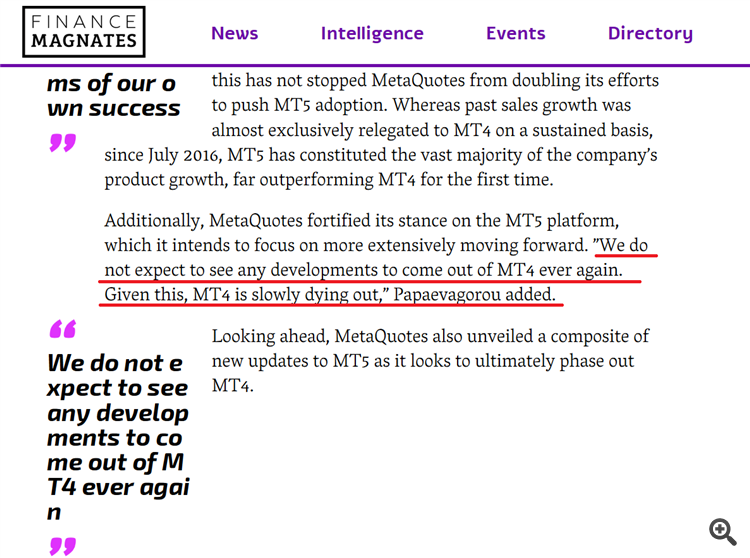 Does anyone know what these updates consists of?

I hope these are minor updates (bug fixes) that were already planned or pending before or are something related to the porting of trading accounts to MT5. Otherwise, I don't understand anything.

Exclusive: MetaQuotes Emphasizing MT5 Development, as MT4 ‘Slowly Dying Out’
MT5 has become the paramount focus of MetaQuotes as the group looks to phase out the widely utilized MT4.
Are you ready to Metatrader 4 build 418 cannot add purchased indicators

The MetaTrader 4 platform update will be released on December 16, 2016. We have fixed some bugs based on crash reports.

The update will be available through the LiveUpdate system.

It seems like they have read this thread. Unresolved bugs since 22 Aug 2016, fixed just now???. There was no time previously to their announcement to fix those bugs (from 22 Aug 2016 to 15 Nov 2016)??? It's a bit weird, but I hope it's that and I hope it's really the last MT4 build. Otherwise, what they announced was just to see how people reacted? Or have they repented of what they announced? I believe and hope not, but who knows ??.