Okay well let me draw some arrows on it. 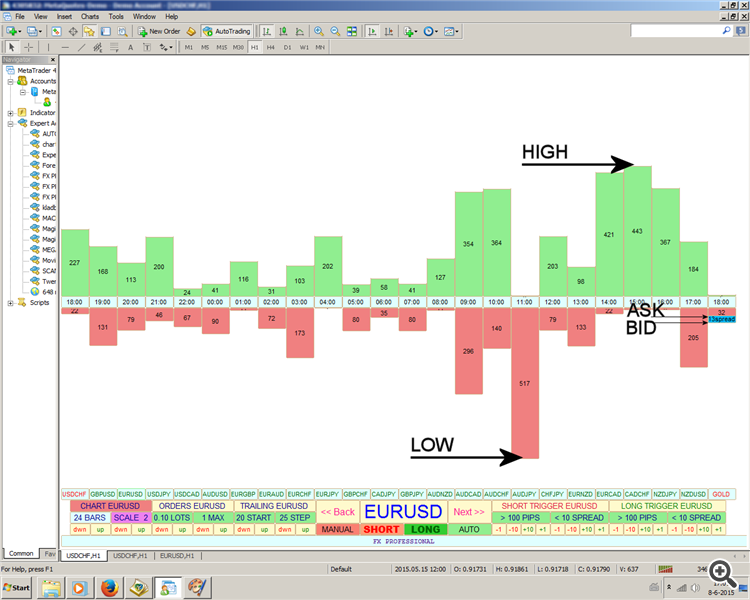 Open is always at the center line.

High is always up in green.

Low is always down in red.

Spread is always where Ask and Bid are.


Okay well let me draw some arrows on it.

Open is always at the center line.

High is always up in green.

Low is always down in red.

Spread is always where Ask and Bid are. But this is only one currency pair where as the first chart showed 24 currency pairs, sorted in value, only bars 0.

I don't understand too.

Just I guess it is the return expressed in pips. Like high - open and low - open.


I don't understand too.

Just I guess it is the return expressed in pips. Like high - open and low - open.

Sorry, I just saw his explanation from Marco vd Heijden in the next page. Ignore this post please.

Okay so i am happy to see you understand the chart.

Which brings me to another thing i would like to show you.

You talked about the punishment in small losses, maybe it's a good idea to look at it from a musical perspective.

So far we discussed the bars in a row, but we did not look at the pips per bar yet.

Forex is also much like a symphony, it has got it's own "beat" to it, just like any piece of music has.

So in essence, you have to 'feel the beat' or at least have some knowledge about it's intervals, to be able to dance to the beat... for if you do not, your play will be out of tune..

Does this make any sense at all ?

It's time for some data again.

Here's an example output of the robot Pips Per Bar.

But it's a bit hard to make any real use of this numeric data so we plot it into a visual representation again. 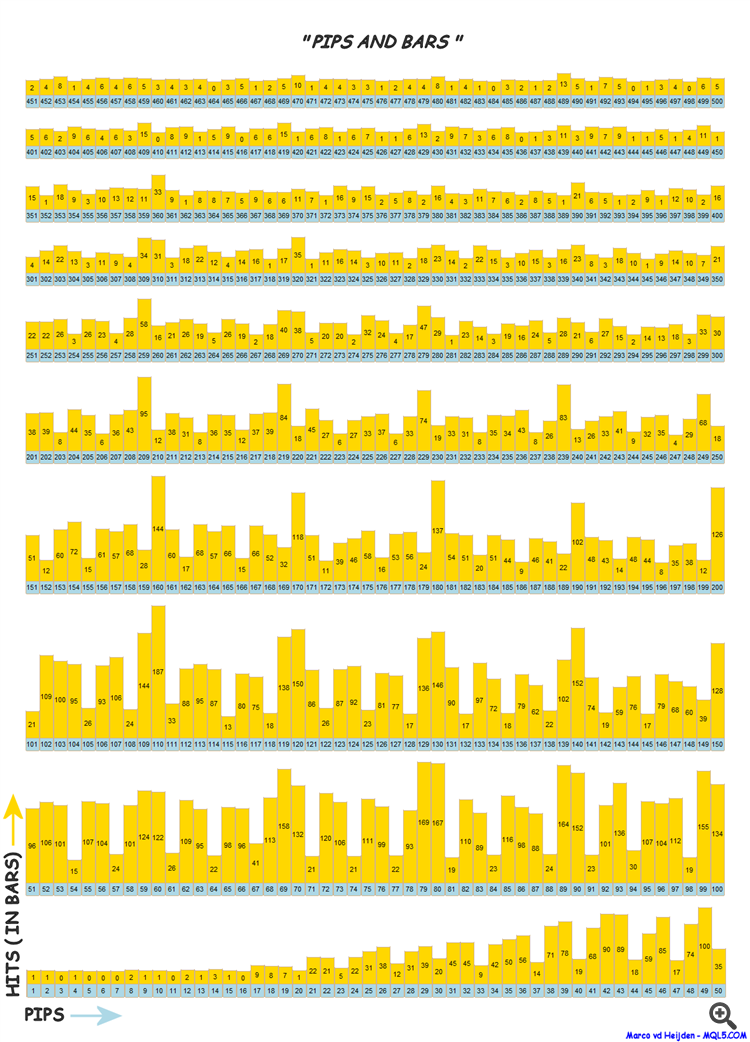 So since we are looking in a musical perspective i tried to present it as a piece of musical sheet music for you.

Maybe you can already identify specific patterns or even a beat.. in this graphical representation ?

Also notice how these 'early bars' become dominant after the 200 pips mark,

And then notice that this 'early bar' behavior returns in a stair like fashion some time later..

I'm not exactly good at explaining myself, but if you stare some time at the "song" i hope you will see some interesting things that can help you avoid the punishment.

Pro Scalping, by Tommy Help with this code MMTS system

Don't worry too much. Ha ha.  I created this thread for finding out some justification to use risk reward ratio 2:1 (TP/SL) over 1:1 (TP/SL).

If you have any new opintion on this your more than welcome to express here. You can approach from any angle as you wish.

Risk Management in Forex.. My TP ends up I was doing some

To continue the discussion, I just had some thought that Risk Reward ratio will be somehow connected to profit factor or expected payoff.

So still looking for some brilliant thoughts from some brillant traders. :)

Back Tester : Differences What helped you to An Impressive Sniper Accurate
123
New comment