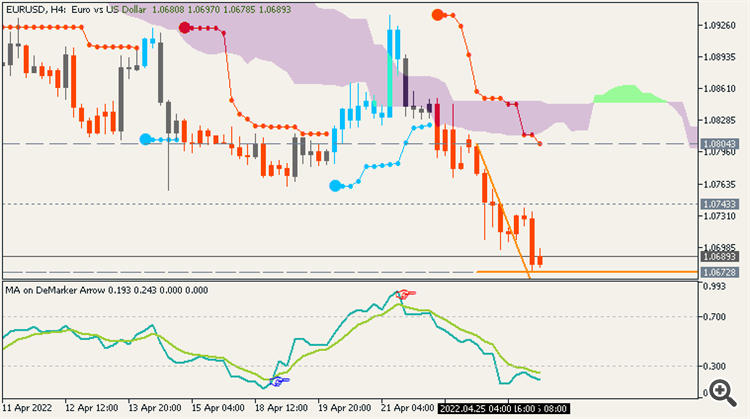 The subwindow displays the usual indicator 'DeMarker' and smoothed with the help of 'Moving Average'. 'Arrow' objects are displayed at the intersection.

First off I just want to say that I'm not a fan of anything that lags, and that includes (most) moving averages. I had the luxury of using the below described at my last job, but not anymore. I was surprised to see that I couldn't find it anywhere for metatrader, so I was hoping someone might take interest. I'm not a programmer, but the logic for this seems very simple, and the results have been outstanding when I have used it; I would be thrilled if someone would like to tackle this.

During nontrending markets, the moving average is not displayed, but when a breakout opportunity is prevalent, the moving average is installed on the chart, and it can be used quite easily as a guide for the trend, a filter for false breakouts, as well as a strong indication for when to exit. The rules are fairly simple, and are explained as follows:

How to trade it:

If a bar closes above an ACTIVE moving average of the highs, buy.

If anyone needs any more info please ask. I have tons. Would love to see this coded.

PS - Attached, lots of goodies for DeMark peoples. Dont have too much fun. Thx!