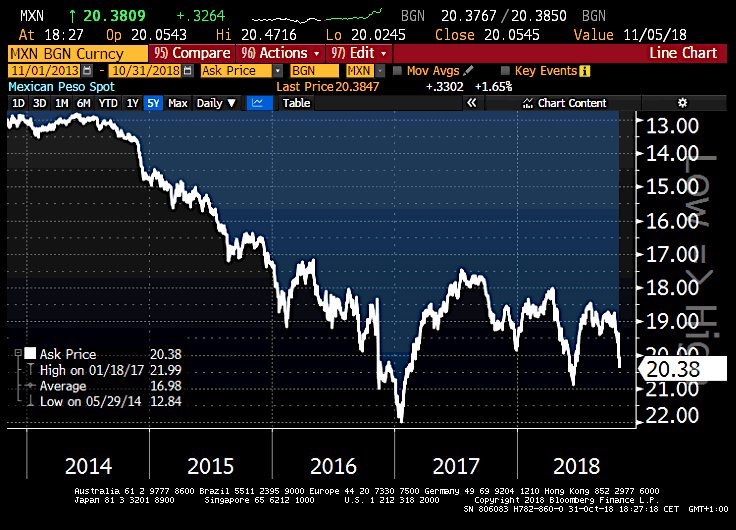 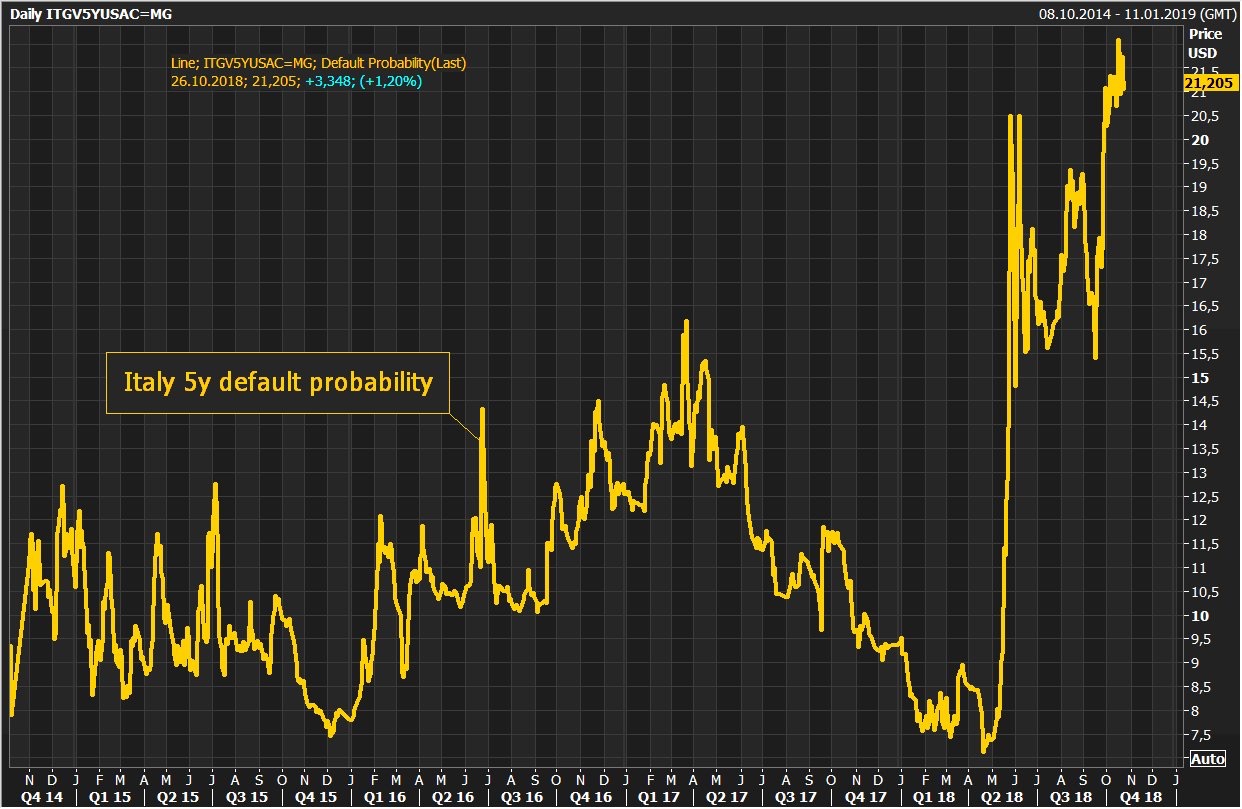 Andrea Aquaro | 2018.10.19
Italian bonds don't have history on their side. Using the eurozone sovereign debt crisis era as a base, it looks as though the nation is very close to losing the confidence of international investors, John Authers writes
Andrea Aquaro Twitter: @AndreaAquaro 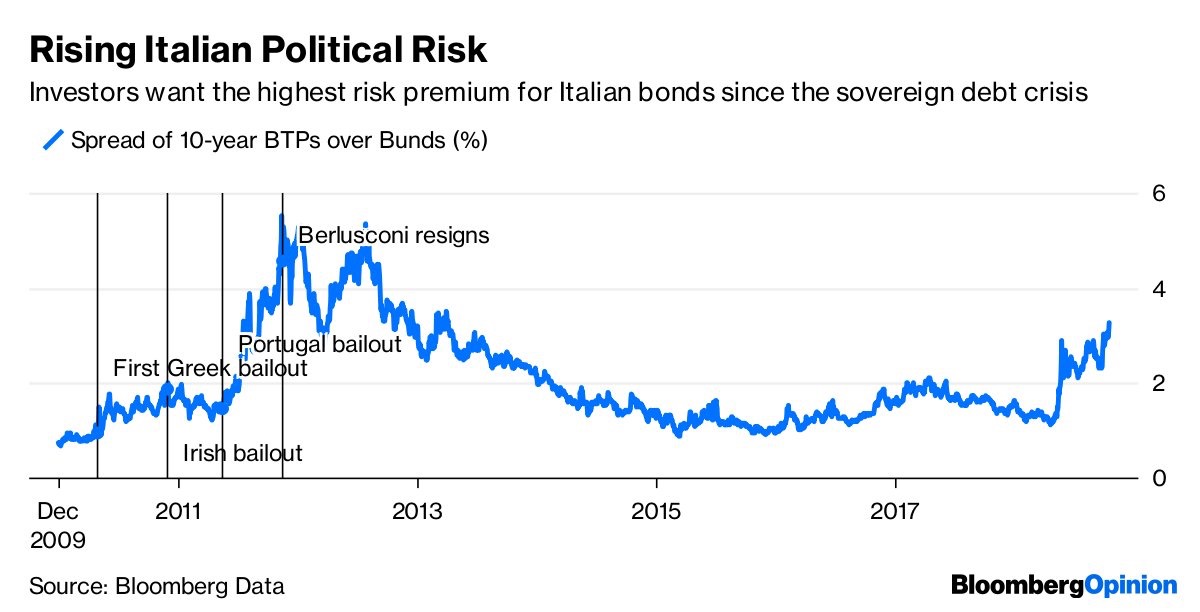 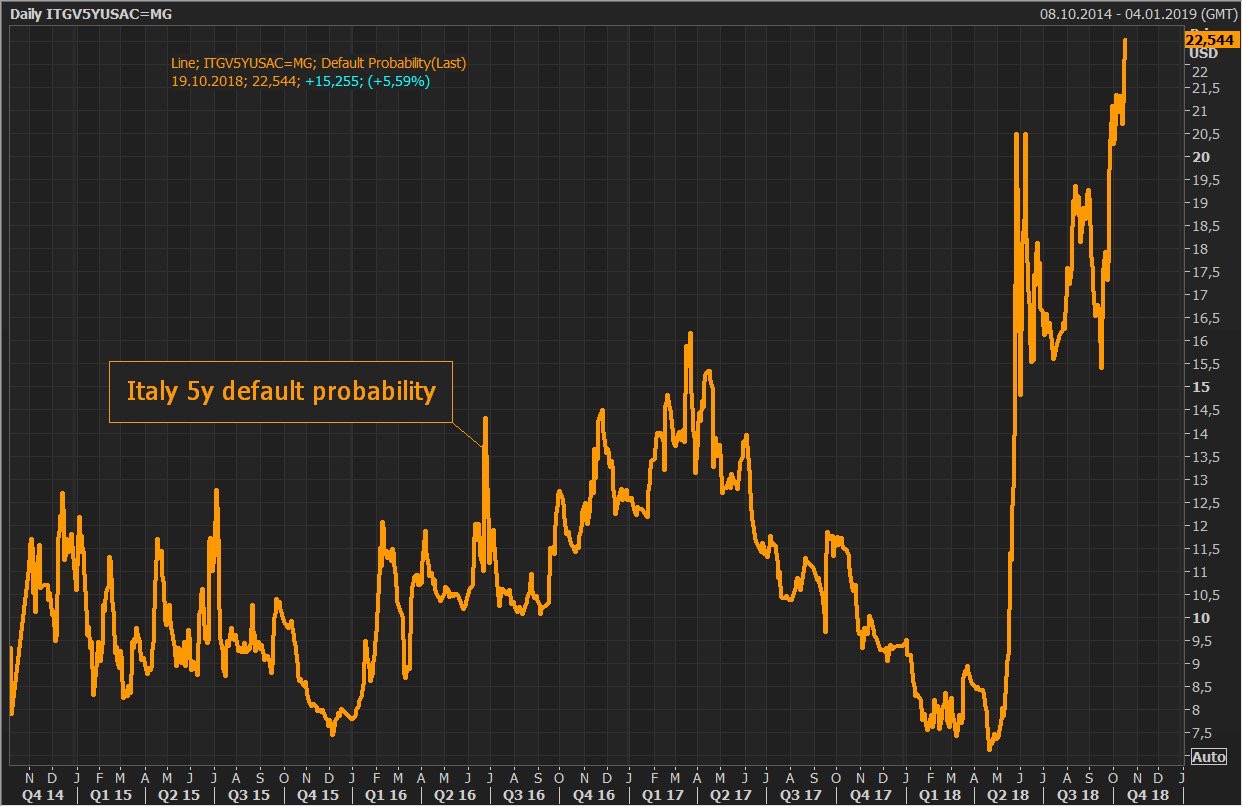 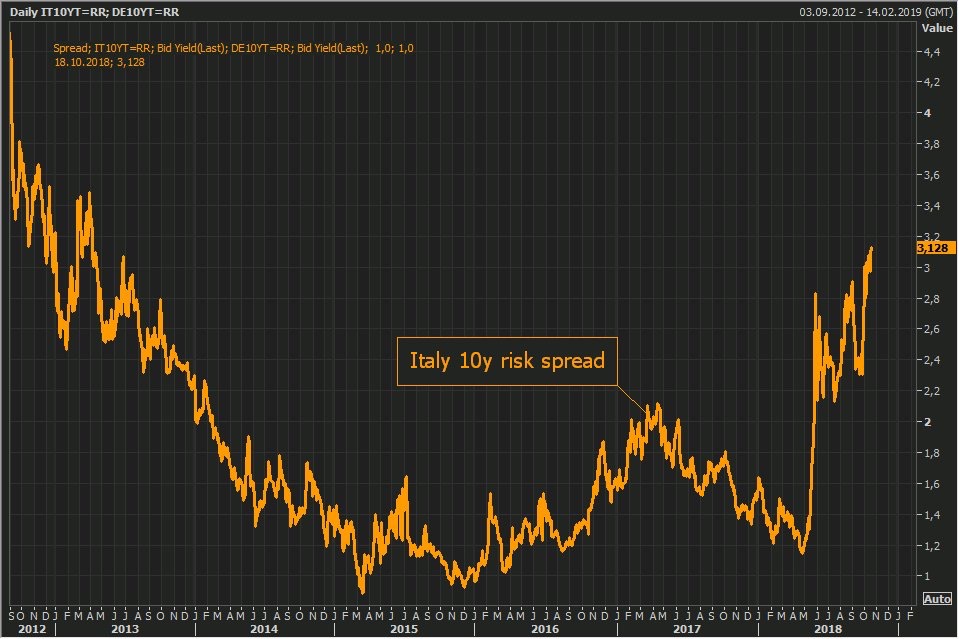 Andrea Aquaro | 2018.10.10
Euro bulls looking to push the bids higher in thin early Wednesday action.
A likely non-starter from the ECB sees broader markets keeping an eye out for continued Italy headlines.
The EUR/USD is testing to the high side in early Wednesday action, pushing north of the 1.15 barrier ahead of the European markets.

The Italian budget snafu continues to be a bearish drag on the Euro, and recurring headlines focusing on headwinds from rising global tensions, including cautionary statements from the International Monetary Fund today, are adding to the cautious undertones in broader markets, but EUR bidders are indifferent for the time being, pushing the EUR/USD back off of the week's low punched in yesterday at 1.1430, and Wednesday's session will see a thin smattering of Euro-centric data.

At 07:00 GMT will be a European Central Bank (ECB) Non-Monetary Policy meeting, and the effects will likely be limited with the central bank focusing on non-fiscal policies, though too much attention by the ECB in the Italian bond field could see some volatility kick higher, followed closely by a speech from the ECB's Mersch at 08:00 GMT. Wednesday is also slated for a 10-year German bund auction, and risk-off within the Eurozone could rear its head if the Italy-Germany bond spread continues to widen.

The Euro, despite trying to make a bullish play, still remains in bearish territory in the medium-term, and according to FXStreet's own Valeria Bednarik: "the intraday recovery fell short of affecting the negative tone of the pair, as, by the end of the US session, it continues trading below its 20 SMA in its 4 hours chart, after failing to surpass the level at the beginning of the day, while technical indicators have recovered from their daily lows but lost upward momentum within negative readings. The immediate resistance continues being the 1.1500 level, but the pair would need to firm up beyond 1.1565 to shrug off the negative tone, at least temporarily."

Andrea Aquaro | 2018.10.05
EUR/USD: 50-HOUR EMA IS STIFF HURDLE, FOCUS ON THE US WAGE GROWTH FIGURE
5 October 2018, 05:43
The EUR/USD has failed twice in the last 14 hours to cut through the 50-hour exponential moving average (EMA).
The treasury sell-off could gather more steam, sending the EUR/USD lower if the US wage growth numbers beat estimates by a big margin.
For the EUR/USD traders, the 50-hour exponential moving average (EMA), currently located at 1.1518, is a key level to watch out for in Europe.

This is because the recovery from the low of 1.1463 hit yesterday seems to have run out of steam around the EMA. That argument has merit as the pair has failed twice in the last 14 hours to cross the 50-hour EMA in a convincing manner.

The rejection at the 50-hour EMA may prove costly in Europe if the treasury yields resume the rally, although caution ahead of the US non-farm payrolls and wage growth release could keep the 10-year flatlined. At press time, the 10-year US Treasury yield is trading at 3.19 percent, having clocked a high of 3.23 percent yesterday.

Later today, the EUR/USD may print fresh 1.5-month lows below 1.1463 if the US wage growth number blows past expectations, lifting the 10-year yield above the previous day's high of 3.23 percent. It is worth noting that the bar of expectations has been set high and the doji candle on the 10-year treasury yield's daily chart is reporting indecision or bullish exhaustion.

As a result, anything less than 0.3 percent and 185K, the official economists’ expectation for average weekly earnings and non-farm payrolls, respectively, could trigger a sharp drop in the yields and the US dollar. 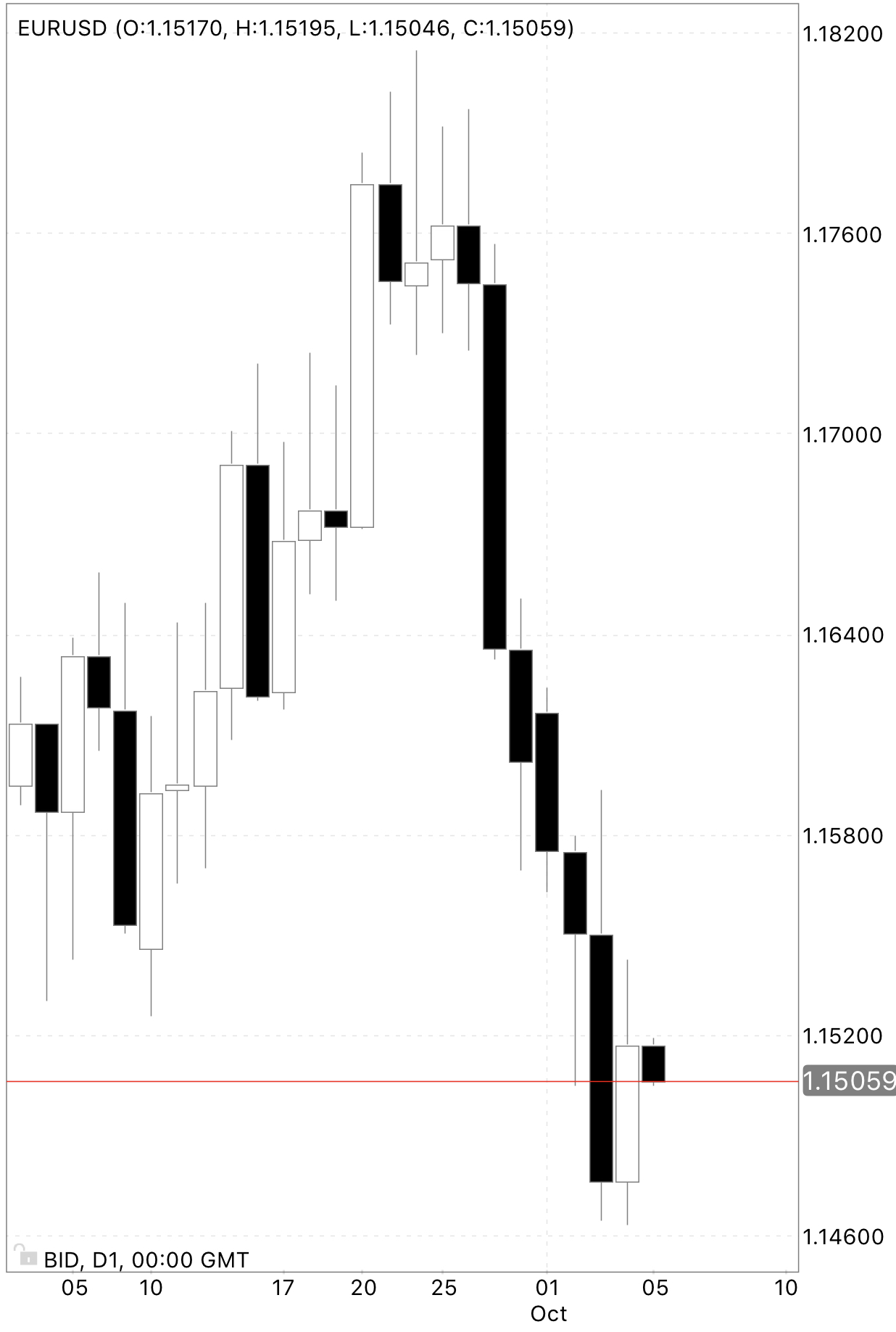 Andrea Aquaro | 2018.09.06
The EUR/USD could remain bid on narrowing Italy-Germany yield spread.
The escalating trade tensions may boost haven demand for the US dollar.
Better-than-expected US ADP and non-manufacturing PMI could put a bid under the greenback.
The EUR/USD produced a big green candle on Wednesday, possibly due to a sharp drop in the Italy-Germany bond yield spread.

The spread between the 10-year Italian government bond yield and the German 10-year bond yield dropped sharply in the last two days from 296 basis points (bps) to 268 bps, on EU friendly budget remarks.

Moreover, the feeling spread indicates that the market pessimism over the Italian budget is receding. As a result, the common currency could remain bid today.

However, if the European equities drop in response to escalating US-China trade tensions, then the EUR/USD may come under pressure. Further, the USD may pick up a bid if the US ISM non-manufacturing number and the ADP employment report paints a rosy picture of the US economy.

A dull offering of European economic data is likely to see traders singularly focused on a speech from Fed Chair Jerome Powell at the US central bank’s Economic Symposium in Jackson Hole, Wyoming. Such appearances have frequently marked the announcement of key forward guidance establishing the monetary policy trajectory for the months ahead.

Mr Powell will probably look to make the case for continued interest rate hikes. Rhetoric asserting the Fed’s independence may be aimed at countering dovish jawboning from the White House while the priority of domestic objectives is stressed to deflect worries about cross-border spillover. Some emerging markets – most recently, Turkey – have wobbled as the Fed’s actions boost global borrowing costs. 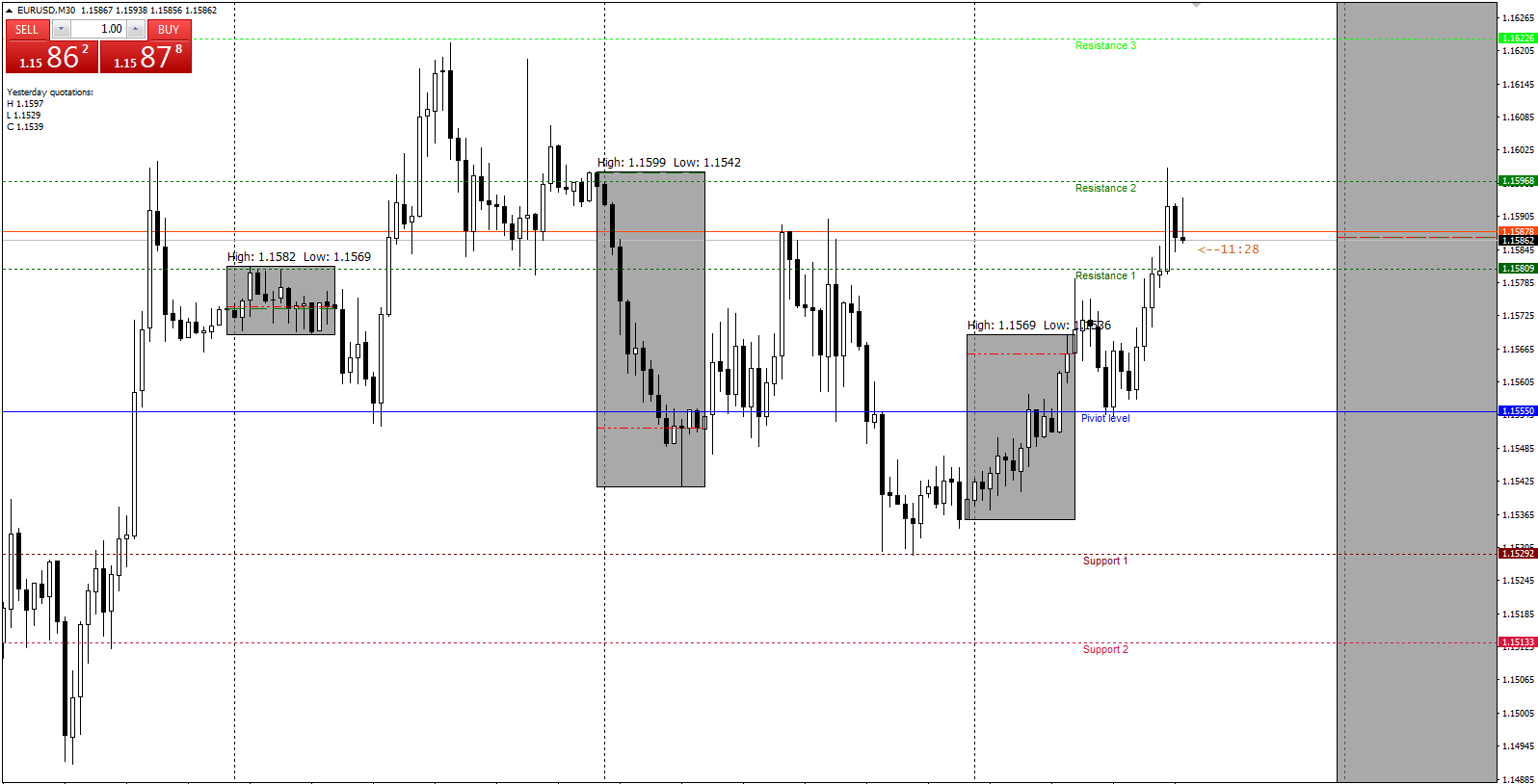 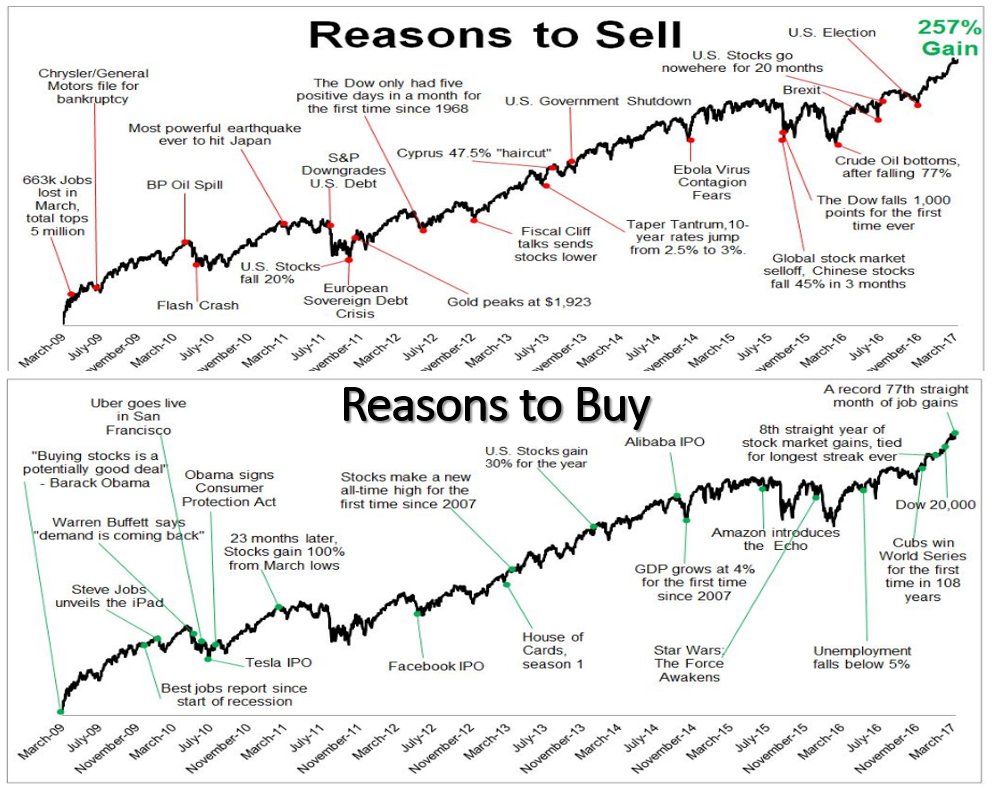 The enormous tensions that developed in the last hours against Greece, inflation decreased in the United Kingdom, as well as that of the United States on Friday led to a strengthening of the dollar in the last three sessions of the previous week...
Compartir en las redes sociales · 1 120

Analysis of the Currency Weekly from May 18 to May 22