Which strategy is better for NFP

I believe it is breakout strategies on M1-M5 after waiting the big movement of the news release.

Always check the spread of the currency pair. Never trade if it is higher then the normal by 30%.

How long you hold WHat happen with the Forex Analysis

118
Jesse Hannon 2016.07.09 03:13 2016.07.09 05:13:22 #3
If you are trading higher timeframes like the 4h or daily, first consider where the trade would naturally go depending on your system, then wait 4 or 5 minutes after nfp release to see where price settles after the news spike. If price seems to continue in the original direction of your planned trade, then enter as if no news happened. If price rockets against your original thinking, stay out and wait for next best setup.
Mr.Nims, Renko Ashi Scalping Learn to be a Non-Farm Employment Strategy

last 4 years I was away from news trading but again getting interest to trade at news time.

I am trying to find out a stable strategy but not yet confirmed. Yesterday applied NFP news and got excellent result.

But I am not sure, is it my good luck or good strategy. I have to wait for more high impact news to get strategy confirmation.

Generally I would say stay out of the market.

Is good when the market moves in one direction and you take advantage of the direction.

If the market moves both direction making 100 pips up and then 100 pips down it can wipe out your account irrespective of which direction you picked.

lol...Yes close it. No strategy works during NFP all the time.

Do never use a stop grid strategy when trading news. You have no control about the spread and no control about where the order gets filled. And normally the price comes sooner back as you would be able to react.

You definetly can trade news. as long as you know the instrument you trade and as long you are able to trade successful anyway. There are never news that move the price chaotic, all news always fullfilll only the chart picture and help to reach destinations faster, nothing else, no matter if this is NFP or Brexit. If you think a price moves up or down in a logical way because of the news content - you are wrong. News are just a trigger for a bigger move, without having anything to do with logic. I traded both, Brexit and NFPs by the way and both with success during the initial move. And I always trade the initial move during news, not the LetsHopeItPullsBack-Strategy.

If you want to trade such news, figure out the important targets in the chart. Use trailable limit orders which are also able to watch the spread. If you dont have the tools to do that and dont have the knowledge about important destinations and resistance levels of a chart - then stay away. Do never try to trade it manually or as mentioned above with a stop order grid without knowing exactly the targets (50-70 pips ... what now, 50 or 70? - its just guessing and gambling, sorry for saying that), it will just wipe your account sooner or later. Rather sooner. I saw the NFPs many times and often it moved just 40-50 pips into the initial direction and then came back to close somewhere much deeper in the opposite direction.


last 4 years I was away from news trading but again getting interest to trade at news time.

I am trying to find out a stable strategy but not yet confirmed. Yesterday applied NFP news and got excellent result.

But I am not sure, is it my good luck or good strategy. I have to wait for more high impact news to get strategy confirmation.

Without checking it, I bet the M1 and M5 offer a clear breakout setup. If you want, post that and lets discuss it.

Ok, I checked it, and the M15 gives the answer and underlines what I wrote.

Here is the chart: 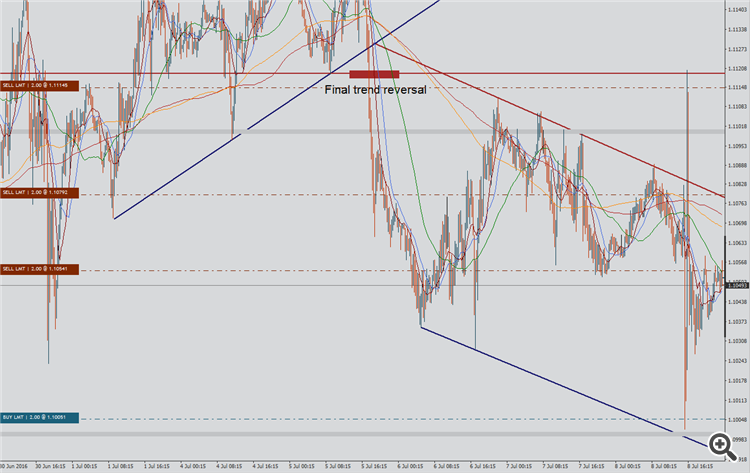 As one can see, there is no "uncontrolled" move and the targets were just clear. After the uptrend reversed to a down-trend, it had only 2 confirmations on the lower trendline, but already 5 on the upper of the new trend, the 3rd low was missing = potential target #1. By just connecting these two lows, you get the almost exact target of the downmove, without guessing about the pips. This could be both, a limit buy target as placed in the chart as well as a short target for a stop order.

The other limit in the upmove is also clear, it´s exactly the level, where the uptrend was broken - of course there is at least a reaction. And trend is not broken just like that and just because NFPs came out.

Anyway, without the NFPs, the trend was short, and the entry for a stop short order would have to take place below the last lows or as a limit at the upper trendline of the downtrend. Here you go: 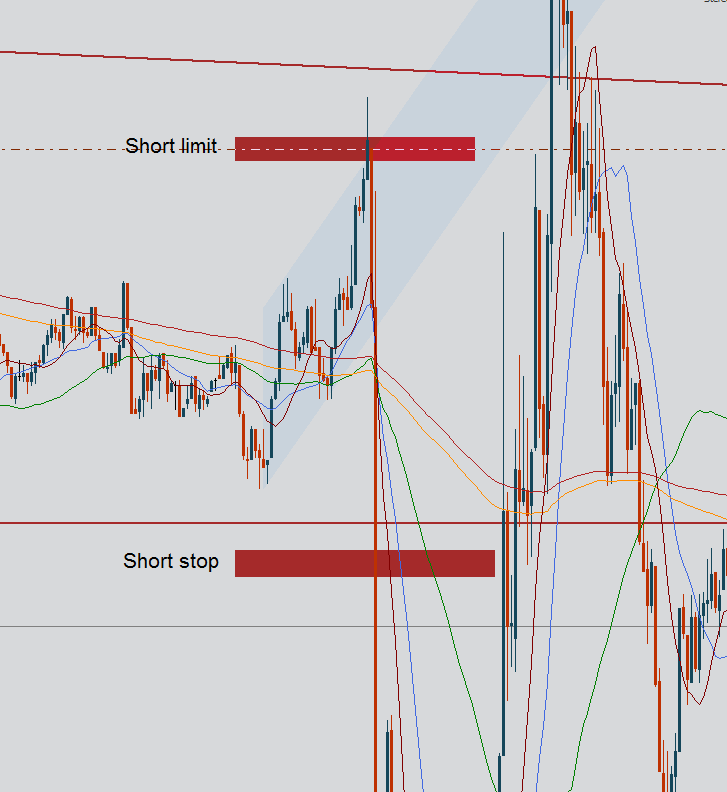 This is not a special NFP setup, it´s just a typical one and the NFPs just accelerated everything. The blue channel is not a trend, it´s a kind of a flag because - just to remember - we were already in a short trend. And a bearish flag is normally broken on the lower side.

Now one may say, ok, that´s easy to talk about the past. Lets take a look at the current situation: 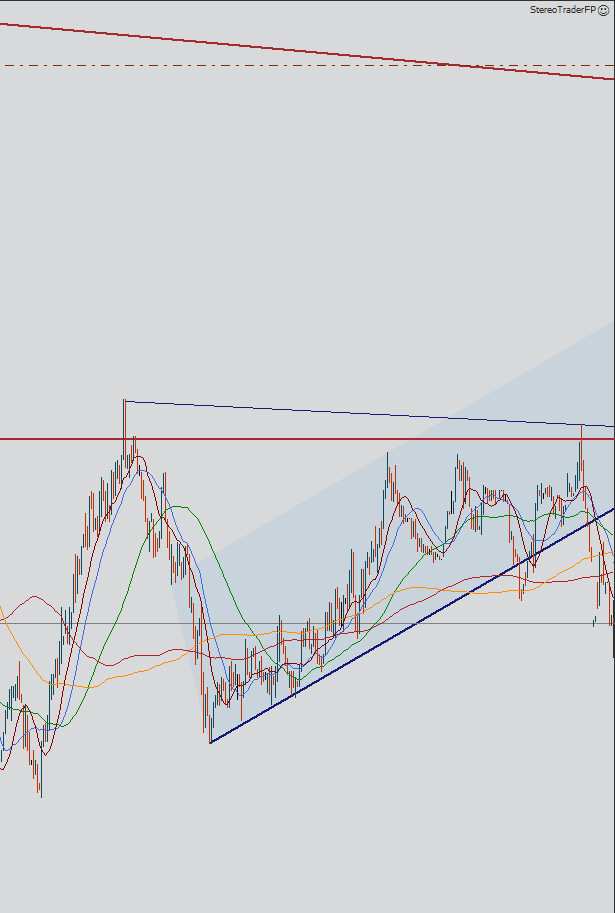 Kind of a mini bearish flag again. Watch where it goes. The blue line above is the level for a stop loss. If it goes there, it looks for either confirmation of the upper trendline (red) or for a breakout above the upper trendline.

Edit: If I'd be looking for a setup, I'd go short and had my take profit on the lower blue line, which is below the low of the NFPs in the meanwhile.