In this part we continue discussing Artificial Intelligence models. Namely, we study unsupervised learning algorithms. We have already discussed one of the clustering algorithms. In this article, I am sharing a variant of solving problems related to dimensionality reduction.

Principal component analysis was invented by the English mathematician Karl Pearson in 1901. Since then, it has been successfully used in many science fields.

To understand the essence of the method, I propose to take the simplified task related to the reducing the dimension of a two-dimensional data array to a vector. From a geometric point of view, this can be represented as a projection of points of a plane onto a straight line.

Such a line is called the principal component. That is why the method is called Principal Component Analysis. 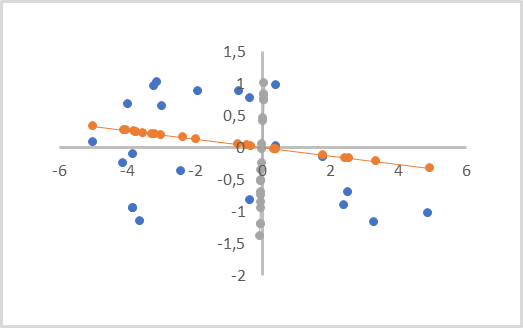 Visually this looks similar to a linear regression. But these are completely different methods, and they produce different results.