We usually analyze the market using candlesticks or bars that slice the price series into regular intervals. Doesn't such discretization method distort the real structure of market movements? Discretization of an audio signal at regular intervals is an acceptable solution because an audio signal is a function that changes over time. The signal itself is an amplitude which depends on time. This signal property is fundamental.

Attentive traders may notice that the candlesticks in the market are conventionally divided into groups of "large" and "small" sized candlesticks (areas with high and low volatility), which means that the chart is not a random walk and there are patterns. If time discretization introduced strong distortions, then this effect would not be observed. However, this feature can be explained by the fact that the candlestick size depends on the number of trading operations executed inside this candlestick. How this can be checked? You can simply look at the chart with tick volumes - "small candlestick" periods are accompanied by low tick volumes, and "large candlestick" periods come alongside high tick volume periods. If we assume that one tick is one step, then the price makes more steps during "large candlestick" periods, but the candlestick size remains proportional to the square root of the number of steps multiplied by the average step size (example on Figure 9). Tick volumes, in turn, are directly correlated with the trading activity: the higher the trading activity, the more ticks pass per unit of time. Exchange markets provide the history of real volumes, where you can see that tick volumes strongly correlate with real volumes, which also indicates the relationship between the number of ticks and the intensity of trading activity. 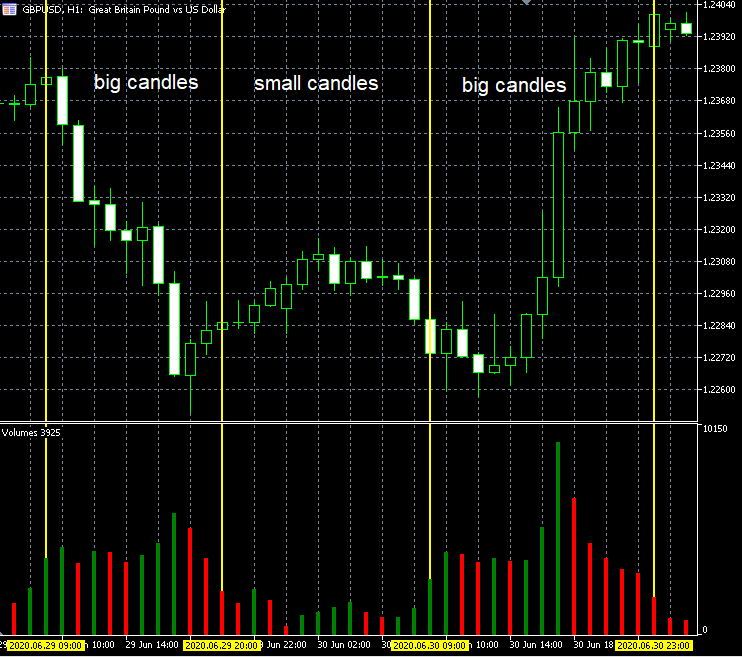 This also proves that time discretization introduces strong distortions to the resulting price series form and thus it makes price analysis more difficult. This distortion has led to the emergence of a separate category of trading systems, the so-called "night scalpers". I am not saying that they cannot generate profits, but it is necessary to take into account this peculiarity of a price series presentation when developing such systems and to conduct additional research in order to answer the following question: "Is the probability of a reversal in these areas really higher than the probability of a trend continuation?" and "Do the statistical characteristics of these areas allow to generate a profit?", because such systems are based on this pattern.