USDJPY: With a strong rally seeing the pair continuing its past week upside offensive, further strength is likely in the days ahead. This leaves its big psycho level at 100.00 level as the next upside target were respite may occur and turn it lower. If this fails to happen expect more upside gains towards the 101.00 level. Further out, resistance resides at the 102.00 level. Its daily RSI is bullish and pointing higher supporting this view. As long as it holds above the 94.45 level this view remains valid. On the downside, support lies at the 97.82 level where a violation if seen will call for a move lower towards the 96.70 level and then the 96.00 level. All in all, USDJPY remains biased to the upside in the medium term. 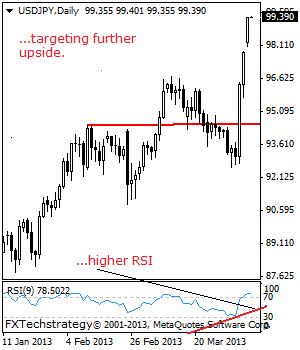 A Daily white body has formed yesterday.A Daily rising window has formed (where the top of the previous shadow is below the bottom of the current shadow). This usually implies a continuation of a bullish trend.Three Daily white candles has formed during the last three Daily bars. Although these candles were not big enough to create threeDaily white soldiers, the steady upward pattern is bullish.

The RSI has just reached its highest value in the last 14 period(s). This is BULLISHsignal.

SAR signal was a Buy 3 days ago.

The close is currently

ABOVE its 200 daily moving average

ABOVE its 50 daily moving average

ABOVE its 20 daily moving average