Hi everyone and thank you for this great forum.

I have been into forex since November 2011 and still struggling to make a profit. Recently I have started to use a simple no-indicators-strategy and it seems to work pretty well with my m5 chart for spread betting - which is tax free in my country. I once found this indicator called CCI arrows and it looks great on historical charts but it repaints madly on live charts. If I just could make that indicator work, even showing +10/-10 pips wrong I would be making money each day spread betting on single 5 minute bars. I am attaching the indicator and sincerely hope that someone capable here can take a look at it.

Thanks a lot mates,

I just watched it on visual mode and it only repaints the current arrow. Some argue that is not really repainting since the market has changed with a new tick. The calculation represented by the arrow puts it in a different place. If it did not repaint, then you would be working with older information. Note that the CCI also repaints along with the arrow movement.

By the way, a cross of zero on CCI indicates the start of a trend, but usually 4/5/6 CCI values in a row - in the same direction - confirm the trend.

What is it that you want the indicator to do?


I have been into forex since November 2011 and still struggling to make a profit.

You're not alone. 95% of all traders fail to be profitable, and almost ALL will eventually give it up. I've been trading and studying forex since 2003 and I'm still unable to consistently make a profit. Although I took 3 years off (2008-2011) to get a a degree in accounting and I wasn't able to spend much time with FX trading during that time. For the last 6 months or so, I've been getting back into it. But I have learned (the HARD way!) many times over by blowing out several REAL accounts with REAL $, that you simply CANNOT consistently win in ANY market over the long haul. Market conditions change; what works today will eventually fail in the future.

The only way to be consistently profitable (until conditions change) is by having a system that has statistically proven itself to be a consistent winner. The only way to find such a system is to design and test it yourself. You cannot make money with other people's systems. However, this can become very time consuming and seems like re-inventing the wheel.

Good luck and hang in there.

plzz help me I want to get Low Quality Broker Data


Hi everyone and thank you for this great forum.

I have been into forex since November 2011 and still struggling to make a profit.

I believe the idea is to just survive for at least a year or so in order to learn how to trade.

This is my cumulative account profit since I started two years ago ... 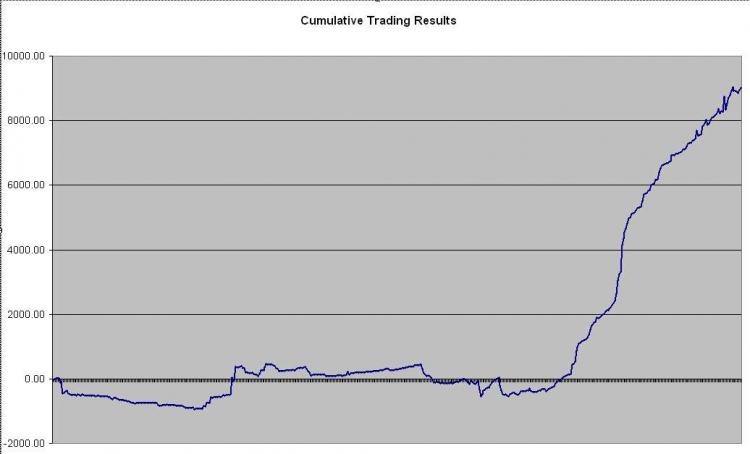 Notice the initial drawdown of £900 (on a £5k account) with the peak loss after 7 months of trading. Yes it looks like things are good now, but the account size has been boosted by deposits (not shown on the graph of course) and the open loss on other trades is about £7k (mostly on XAUUSD positions). The market just happens to like my (one) trading system - at the moment.