Fed's Bullard repeats he wants one hike then an extended hold

The Federal Reserve’s short-term policy outlook remains largely unchanged in the wake of the US election results, although the prospect of more fiscal stimulus from Washington could alter the central bank’s view on what constitutes neutral rates for the economy.

Those views were echoed by Federal Reserve Vice Chair Stanley Fischer, who said last week he welcomes expansionary fiscal policy in the wake of Donald Trump’s election victory. The President-elect has promised a massive spending program to rebuild American infrastructure, a sign that fiscal stimulus could be be on the way early in his four-year term.

Trump swept to power last week after dominating battleground states on route to an easy electoral college majority. The news triggered initial volatility in equities before the market staged a massive rally that sent the Dow Jones Industrial Average to multiple record highs.

Fischer, who is also a voting member of the Federal Open Market Committee (FOMC), told a conference of the Central Bank of Chile that the case for raising interest rates is “quite strong.” Fischer added that expansive fiscal policy will increase the neutral rate and “ease the task of monetary policy.”

Members of the FOMC “have commented that it would be useful to have more expansionary fiscal policy… I’m on record with that,” Fischer said.

Market expectations for a rate hike at the Federal Reserve's December policy meeting topped 90% on Monday, amid growing optimism surrounding the effects of a Donald Trump presidency on the U.S. economy.

According to Investing.com's Fed Rate Monitor Tool, odds for a rate hike at the Fed's December 13-14 meeting rose to 90.6%, up from 81.1% on Friday and compared to 71.5% in the days leading up to the election last week.

The greenback has been boosted in recent sessions amid optimism that increased fiscal spending and tax cuts under a Trump administration will spur economic growth and inflation, which would ultimately lead to an era of higher interest rates.

U.S. yields have been on a tear following Donald Trump's U.S. election win last week, as traders reassessed the implications of a Trump presidency, with many seeing it ushering in higher economic growth and rising inflation.

After a historic week in which U.S. politics dominated market sentiment, investors will get back to the business of watching the Fed and economic data in the coming days.

December rate hike may be enough to get U.S. rates to neutral setting, Fed's Bullard says

One interest rate increase, possibly next month, may be enough to bring U.S. rates to a neutral setting, Federal Reserve policymaker James Bullard said on Wednesday.

"A single policy-rate increase, possibly in December, may be sufficient to move monetary policy to a neutral setting," Bullard said at a UBS conference in London.

The jump in the U.S. dollar and government bond yields since last week's election of Donald Trump to the U.S. presidency remained within the range of the last year, he said.

"Equities and foreign exchange rates have been re-priced, but are well within the experience of the past year," Bullard said.

In the Wall Street Journal, in their '5 things to watch' format - Janet Yellen's testimony coming up at 10 NY time Thursday (text released at 8am)

In testimony to the Congressional Joint Economic Committee, the Q&A session focussed to a considerable extent on regulatory issues.

As far as monetary policy is concerned, Yellen suggested that the evidence seen since the November meeting was still consistent with expectations with a tighter labour market and a gradual rise in inflation.

The Fed would have to factor in any economic-policy developments, but the evidence so far suggested the November expectations were still valid, which implied that rates would be raised at the December meeting.

She stated that she could not foresee any circumstances where she would not serve her full term as Federal Reserve Chair.

Yellen commented that the market developments since the Presidential election suggested that markets were expecting an expansionary fiscal package.

Such a package could have inflationary consequences and the Fed would have to respond to developments, although she also emphasised that there was a high degree of uncertainty surrounding the situation.

Yellen also strongly defended Fed independence and also stated that the dual mandate mattered to a lot of people.

St. Louis Fed President Bullard (FOMC voter) speaks: Bullard will speak on a panel discussing the near-term path of policy: which road ahead? We expect him to call for tighter monetary conditions globally.

The US dollar is trading at its highest level since 2003, as the prospect of a December rate increase by the Federal Reserve is seen increasingly likely.

The US dollar index, a measure of the greenback against a basket of six other major currencies, rose 0.3% Friday to close at 101.21. That was the index’s tenth consecutive gain. The dollar has strengthened 4.2% over that period.

Federal Reserve Chair Janet Yellen confirmed on Thursday the central bank was leaning toward a December rate increase. Yellen said the case for policy tightening had strengthened and warned about the dangers of leaving interest rates so low. Earlier in the week, St. Louis Fed President and FOMC member James Bullard also said he was considering voting for higher interest rates next month.

The markets are almost certain the Fed will raise rates at the conclusion of its December 13-14 FOMC meeting. The CME Group’s 30-day Fed Fund futures prices, which convey the market’s views on US monetary policy, indicate a 95.4% chance of liftoff next month. That’s up from 90.6% on Thursday.

Several batches of economic data this week added to the view the US economy was ready for another rate adjustment. Weekly jobless claims fell by 19,000 to 235,000, the lowest level since 1973. US consumer price inflation also strengthened to 1.6% in the 12 months through October, official data showed Thursday.

The fundamental picture of the US economy is unlikely to change next week, as investors parse through a steady stream of economic data. On Tuesday, the National Association of Realtors (NAR) will report on October existing home sales. Reports on durable goods orders, new home sales and consumer confidence will be released on Wednesday.

The minutes of the November FOMC meeting will also be released Wednesday. The Fed kept monetary policy unchanged in November, as expected, but set the stage for a potential shift in course in December.

200 years of US interest rates in one chart

History shows the only place for interest rates to go from here is higher — according to veteran technical analyst Louise Yamada.

Looking at a chart of U.S. interest rates over the last two centuries, Yamada pointed to a bottoming formation that has been in place for the last several years.

"We've been looking at the process that we think has been taking place over the last six to eight years in our interest rates, and we think now that the 2012 low probably is going to prove to be the low just the way 1946 proved to be the low in the last cycle," the head of Louise Yamada Technical Research Advisors said Thursday on CNBC's " Futures Now ." 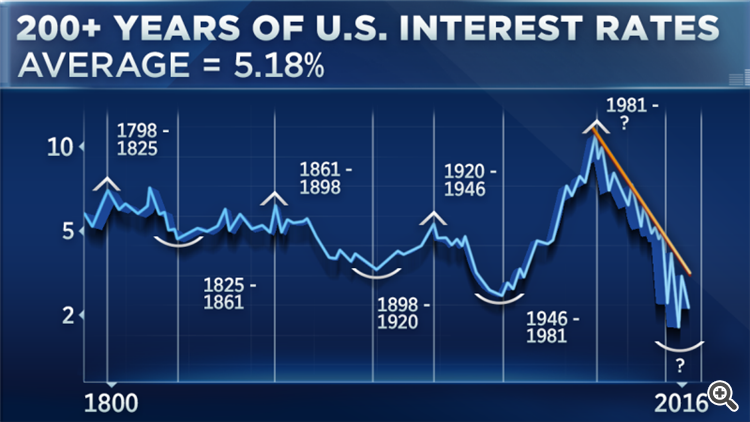 The yield on the U.S. 10-year has surged to 2.3 percent following the election on higher inflation expectations under President-elect Donald Trump and the potential for a Fed rate hike next month.

"I think it would be very healthy [to raise rates]," explained Yamada. "We are definitely watching 3 percent because that's going to be the ultimate level at which we can definitively say that rates have reversed." That 3 percent also corresponds with the 1980 downtrend on Yamada's chart.

"We are looking at the formation of the higher low, and the 10-year note would have to put in place a slightly higher high to define the real technical evidence of the reversal," she added.

Ultimately, Yamada said that higher rates will boost equity prices in the near term, as past cycles have signaled a boom in stocks and the economy.

"The early stage of a bull market can be accompanied by the initial rising rate cycle," she said. "It isn't until you get to about 5 percent that you start having problems."

Market Views For 2016 Market: What's going on? What To Expect From

The USD has had a remarkable couple of weeks given the re-pricing of Fed expectations for next month (now 90%+ probability of a hike according to fed funds futures) along with a steeper path for hikes in the year to come (Figure 2). Although we agree that the potential for inflation to pick up is real, expectations regarding the path for monetary policy have moved in line with our expectation.

On the other hand, we think that the second leg of the USD rally needs to be confirmed by real policy plans, something that we have not seen so far. In this regard, the USD will be reactive to nominations on the new cabinet that could shape the outlook for fiscal, trade, security and immigration policy for the next few years.

The only important development aside from politics is the publication of the minutes of the FOMC meeting. As was widely expected, the November FOMC meeting was uneventful. Heading into the meeting, we felt the Fed had two main goals: to keep expectations centered on a December rate hike, while maintaining flexibility to delay action, should events in the next two months not materialize as expected. We believe that the Fed achieved these goals. Although a few members likely called for a November rate hike, we think most members were likely comfortable waiting for the December meeting, given the proximity of the US election. We look to the minutes for the change in forecast that underpinned the FOMC’s modest upgrading of the inflation outlook.

Dec FOMC Minutes: Next Major Currencies Forecasts Markets Post-FOMC And Ahead
123456789
To add comments, please log in or register