Earlier today, tucked away from the public's eyes, there was another round of drama involving Greek securities this time focused on Greek senior bank bonds which promptly tumbled back to post-referendum/pre-bailout #3 levels. 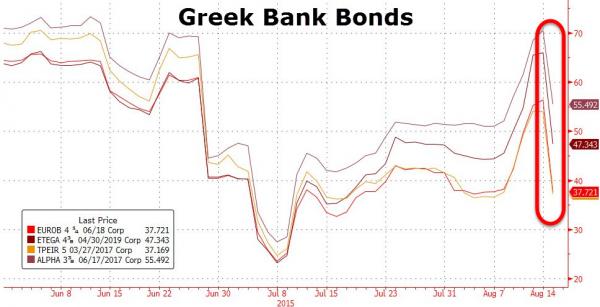 The catalyst was Friday's pronouncement by Jeroen Dijsselbloem who said depositors will be shielded from any losses resulting from the restructuring of the nation’s financial system, but that senior bondholders would certainly be impaired and probably wiped out. In other words, once again the superpriority of various classes has been flipped on its head with general unsecured liabilities ending up senior to, well, senior bank claims.

As Bloomberg reported earlier today, while "Greece’s third bailout will spare depositors in any restructuring of the nation’s financial system, senior bank bondholders may not be so lucky, according to comments from Eurogroup President and Dutch Finance Minister Jeroen Dijsselbloem. The bondholders will be in line for losses if Greek lenders tap into any of the financial stability funds set aside in the new bailout."

“Bondholders were overly optimistic because bail-in of senior bonds was not explicitly mentioned before,” said Robert Montague, a senior analyst at ECM Asset Management in London. “Today they were brought back down to earth with a bump."

Which is bad news for bondholders, but the biggest losers will once again be depositors who represent the vast bulk of unsecured Greek bank liabilities.

Going back to Friday's statement by the Eurogroup president, he specifically said that "the bail-in instrument will apply for senior bondholders, whereas the bail-in of depositors is explicitly excluded." Which is confusing considering that bank stocks were broadly unchanged and in some cases rose. Of course, this makes no sense because as even a first year restructuring associate will tell you, according to traditional waterfall analysis, even the lowliest bond impairment means an equity wipeout. And yet, Greek bank equities are still trading at far more than just tip/nuisance value. Which, to repeat, makes no sense.

But that is not surprising: little of what Europe is doing with Greece makes any sense. Other agree:

"It is not clear how they will make it possible to bail-in bonds while excluding deposits, but as we have seen in other problematic situations, where there is a will there will be a way,” said Olly Burrows, London-based financials analyst at brokerage firm CRT Capital. "We call Dijsselbloem’s solution a bail-up: part bail-out, part bail-in and part cock-up."

What Next For Greece?

Greece had been a dominant issue for investors for much of the first seven months of the year. The seemingly reversal by Greek Prime Minister Tsipras allowed for Greece to move off the front burner. China stepped up to replace Greece as a key issue for investors. First it was the slide in the Chinese share prices, and as stocks appeared to stabilize, officials altered the currency regime.

With the German parliament's approval for a third aid package for Greece, and the Dutch approval likely, the Greek saga enters a new phase. Greek politics, bank recapitalization and implementation will be the new focus.

The demands of the official creditors has split the loose coalition that makes up the Syriza party. There is much discussion about whether Tsipras will call a vote of confidence. If he does, the left-wing of Syriza may come back into the fold, while the pro-European parties, like PASOK and the New Democracy would likely vote to against the government, which it had supported on the reforms. The left-wing of Syriza may chose instead to make its stand at the party conference next month.

A key tactical decision is if new elections are to be held, when would be the least disruptive. The first review of the implementation of Greece's commitments is expected in October. That is a key not only for freeing up more funds, but for a more serious discussion about debt relief. Debt relief is not just what Syriza has campaigned for, but it is a precondition for IMF involvement. An election after the review would seem to be the lest disruptive and the better for Tsipras, who is still the most popular politician in Greece. The polls suggest Syriza would likely return to power, but probably in a somewhat broader coalition.

The ECB will conduct a stress test and review the asset quality of Greece's large banks. This will help determine the amount of recapitalization funds needed. The continued contraction in nominal GDP in Greece warns that the loan book of the banks has likely deteriorated. Importantly, official creditors have ruled out forcing depositors to bear any of the cost of the recapitalization. Senior bondholders are a different story. The precise details of the recapitalization have not been decided, and it could involve some consolidation among the four large banks.

Skeptics about the Greek program falls into two camps. The first sees the austerity being imposed as being fundamentally antithetical to growing. The second sees the key problem being that Tspiras is not seriously commitment to implementation. The first camp may ultimately be proven right, but their argument is moot presently. Greece's elected representatives have accepted the terms. It is the second issue that is key.

Lastly, we note that Merkel suggested this week that the refugee problem is likely to become more important (and divisive?) than the Greek economic and financial problems that nearly tore EMU apart. More refugees entered Greece last month than in the whole of last year. Nearly 95% come from Syria, Afghanistan and Iraq. Without addressing this humanitarian issue, it is difficult to see how Greece's is going to find its economic bearings.

European Union rules to shield taxpayers from having to rescue ailing banks should be applied flexibly because of broader economic imperatives highlighted by the latest Greek rescue package, analysts and lawyers say.

That flexibility may mean that European taxpayers cannot be given cast-iron guarantees that they will not be called upon again to bail out banks as during the financial crisis.

The banks' senior bondholders will be "bailed in" -- seeing the value of their investments written down -- but depositors will be protected to avoid harming the wider economy.

It marks a "pick and mix" application of new EU rules that come fully into force in January to ensure that all stakeholders in a bank, from shareholders to creditors and uninsured depositors, contribute to a rescue before public funds can be called on.

The risk is that excluding some stakeholders could create a shortfall that taxpayers are once again left to plug.

Analysts believe that even if the new EU rules, known as the bank recovery and resolution directive or BRRD, had been in force, euro zone ministers would probably still have chosen to exclude uninsured Greek depositors.

GLIMPSE OF THE FUTURE

Nicolas Veron, a financial services expert at Brussels think tank Bruegel, believes lessons from the Cyprus experience led to Greek uninsured depositors being left untouched and gave a taste of how banking crises will be handled in future.

"We are still in the early stages of discovering what the BRRD implies in practice and the transition is going to be long, shaped by individual cases and not just by the legislation itself," Veron said.

"It would be misguided to exclude any use of public money in future," added Veron.

Bail-in considerations had to take into account the lack of senior bondholders in Cyprus. In the Greek case, they reflected the fact that money in unsecured deposits belongs to small companies who need it to pay staff and keep the economy moving.

This points to governments making use in future of discretion they have under BRRD to exempt stakeholders from being bailed-in if needed to preserve financial stability.

Karel Lannoo, chief executive of the Centre for European Policy Studies in Brussels, said rescues of small banks will be "book-keeping" exercises in line with BRRD rules in the main.

But the financial stability get-out clause would almost certainly be invoked when it comes to handling very big banks whose failure have far-reaching international consequences, Lannoo said.

"Large banks clearly have financial stability implications and you may have fire sales everywhere with everybody dumping bank debt on the market," Lannoo added.

Nicolas Veron, a financial services expert at Brussels think tank Bruegel, believes lessons from the Cyprus experience led to Greek uninsured depositors being left untouched and gave a taste of how banking crises will be handled in future.

That is called "putting them to sleep". And then they are going to hit us

Daniele Nouy, chairwoman of the ECB's Supervisory Board, here: SSM's Nouy says talks with US and IMF have been " fruitful"On Greek banks, Nouy says: