Fundamental Analysis and the Week Ahead

In Europe, S&P downgraded Belgium one notch to AA from AA-plus, further heightening worries over the Euro zone debt problems.

The Bank of Japan announced it would expand its current asset purchase program by another $124 billion, but the news had little lasting impact on the region’s markets. The Nikkei closed down .4% to 9521, surrendering a brief gain following the announcement. The Kospi rose .6%, boosted by Samsung Electronics 2.5% gain, after announcing a record $5.2 billion profit for the first quarter. The Shanghai Composite slipped .4% to 2396, and both the Hang Seng and ASX 200 declined .3%.

Procter & Gamble lowered its guidance for the year, citing high commodity costs. The stock fell 3.6% to 64.44.

Expedia shares soared 23.5% to 40.31 after blowing past analyst forecasts, collecting at least 8 analyst upgrades on the way.

Copper's Powerful Rally Over the Past Week

The Dollar fell against all major currencies on Friday. The Yen and Australian Dollar both jumped an impressive .9%, to 80.29 and 1.0467, respectively. Meanwhile, the Swiss Franc, Euro, Canadian Dollar, and Pound moved up .5% in an unusually synchronized effort.

US GDP grew at an annualized 2.2% rate in the first quarter, slower than the 2.6% expected. On a brighter note, consumer sentiment climbed to 76.4, exceeding forecasts.

Monday’s reports will include personal income & spending, Chicago PMI, and the core PCE price index. GDP data is due from Canada, with expectations for a dismal .2% growth rate.

European Shares Sink as Spain Slips into a Recession

GDP data from Spain showed the economy shrunk by .3% in the first quarter, indicating it had slipped into a recession. The news sent the IBEX down 1.9%, and pressured European stocks across the region. The CAC40 fell 1.6%, the FTSE dropped .7%, and the DAX slid .6%.

Sunoco surged 20.5% on news it would be bought by Energy Transfer Partners.

The Dollar traded mostly higher on Monday. The Euro eased .1% to 1.3232, and both the Pound and Swiss Franc declined .2%. The Australian Dollar sank .5% to 1.0415 ahead of the central bank’s rate decision, and the Canadian Dollar dropped .6%, following disappointing GDP data. The Japanese Yen rallied .6%, breaking through the 80 price barrier to 79.83.

Midwest business activity slowed last month according to the Chicago PMI report, which fell to 56.2 from 62.2. Personal income rose .4%, more than expected, while personal spending rose .3%, less than expected.

Tuesday’s reports will include the ISM manufacturing index, construction spending, and auto sales.

Australia’s central bank, the RBA, cut interest rates by 50 basis points, more than expected, pushing up the ASX 200 by .8%. In contrast, the Nikkei tumbled 1.8% to 9351, as the recent advance in the Yen weighed on exporters. Honda and Toyota both fell more than 3.4%, and Sharp plunged 9.3% after releasing a disappointing outlook. Markets in greater China were closed for holidays. Factory activity in China rose to a 13-month high, according to the April PMI report.

Most European markets were closed for May Day holidays, but in the UK, the FTSE rallied 1.3% on light volume. Lloyd’s spiked 8.3% after releasing upbeat earnings, with profit more than doubling during the first quarter.

Herbalife tumbled 15.1%, after famed short-seller David Einhorn questioned why the company had stopped providing information regarding its distributors.

Bank of America gained 2.5% after announcing plans to cut 400 jobs. Sears jumped 15.4% after issuing an outlook which was better than expected.

Gold and silver both declined fractionally, while copper inched up .2% to 3.84.

Manufacturing activity increased to 54.8 from 53.4 according to the ISM’s PMI report. Construction spending rose less than expected, inching up .1% vs. forecasts for a .5% gain. Total auto sales were flat from last month at 14.4M, slightly below expectations.

The NFP in April was disappointing, as they fell for the third straight month.The NFP reported that employers added 115,000 in April, down from March’s revised figure of 154,000. March’s figure had been revised upwards from its original print of 120,000. The forecas called for an increase of 160,000. Private payrolls rose by 130,000 in April, down from 166,000 in March, while manufacturing added 16,000 jobs as opposed to 41,000 jobs a month ago. Employment increased in professional and business services, retail trade and health care, but fell in transportation and warehousing.

Meanwhile, the unemployment rate fell slightly in April to its lowest level since January 2009, to 8.1 percent. This is down from 8.2 percent the previous month..

Apple dragged on the Nasdaq as it fell to $585 a share. The iPad maker has lost 6 percent for the week, and 12 percent from its all-time high of $644 a share. Kraft Foods posted results that above estimates. They reaffirmed its full-year growth targets and said it was going ahead with the 2-1 split into two companies later this year.

Fundamental Analysis and the Week Ahead

The news, for better or worse, was out of the US this week. The NFP rose much less than expected, adding just 115,000 jobs in April. This was well below expectations for 170,000 . The unemployment rate slipped to 8.1 percent. The lowest reading since January 2009. 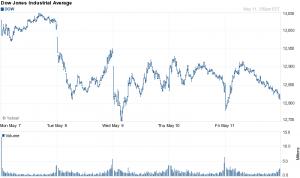 The dollar’s recent performance is impressive. The Dollar Index has risen 1.9 percent to its highest weekly close since the middle of December. Looking at currency’s performance in specific corners of the market, we find the EUR/USD is below 1.3000, AUD/USD is at its lowest level for the year and the Dollar has even been able to muscle gold to a correction of a bull run that goes back nearly three years. The euro is the most fundamentally loaded currency this coming week. Through the close of this past week, the currency won temporary stays on two of the most critical threats to regional stability: the Greek election turmoil and Spanish financial troubles. Both areas can quickly flare up. For Greece, the short-term concern is creating a new government and seeing if it backs the austerity measures or withdraws from EU and suffers a default. As for Spain, the relief in the Bankia nationalization has been muddied by the Economic Minister’s announcement that another €30 billion will be needed to be set aside for further losses of other Spanish banks. 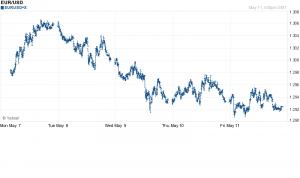 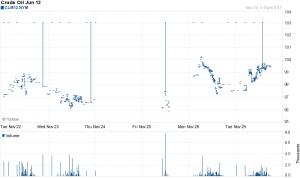 Meanwhile Facebook’s record IPO is already oversubscribed. Shares are expected to begin trading on May 18. Nordstrom lost after the department-store chain missed Wall Street expectations. And Nvidia surged after the chipmaker reported revenue and outlook which topped estimates.

Fundamental Analysis and the Week Ahead May 11

In the latest news from Greece, socialist party leader Evangelos Venizelos failed to form a coalition government after hosting last-minute talks. This news all but crushing earlier hopes that the debt-ridden nation would avoid another round of elections next month. According to the US Labor Department, producer prices posted a surprising drop in April as energy costs declined.

Asian market retreated from Monday’s gains, as the market focused on debt troubles facing Spain and Italy. The Nikkei dropped .8% to 8656, the ASX declined .3% to 1892, and the Shanghai Composite fell .7% to 2301. The Hang Seng closed down fractionally, and the Kospi ended flat.

Microsoft shares gained 2.9% after announcing a new tablet device, the Surface, which will run Windows 8. There will be two versions, the first of which will arrive in the fall.

Oracle climbed 3.1% after announcing profits which beat forecasts. The earning report was issued 3 days ahead of schedule.

The Fed will issue a rate statement and hold a press conference on Wednesday afternoon, and the market is hoping for a new stimulus package.

Also due on Wednesday are oil inventories and mortgage applications.

Earnings are scheduled for Bed Bath & Beyond, Goodrich, Micron Technology, and Red Hat.

European stocks rose as well, in choppy trading. The FTSE gained .6% to 5622, the DAX climbed .5% to 6392, and the CAC40 edged up .3% to 3163. German Chancellor, Angela Merkel said a move to use the European Stability Mechanism to buy bonds from indebted nations was not up for debate. Yesterday, France’s President backed the idea as a means to lower interest rates for struggling countries.

Bernanke once again disappointed investors, failing to announce a new round of stimulus, although the Fed did extend “Operation Twist” by another $267 billion, a move which sells short-term bonds while buying long-term bonds. Stocks fell after his speech, but stocks closed only moderately lower. The Dow slipped 13 points to 12824, the S&P 500 eased .2% to 1356, while the Nasdaq closed up fractionally.

Tesla Motors rallied 5.3% after garnering an upgrade from Goldman Sachs. Adobe slumped 2.7% after cutting its outlook for the year.

Most currencies closed within a stone throw of their opening price. The Pound, Australian Dollar, and Canadian Dollar all declined less than .1%, while the Euro and Swiss Franc inched up .1%. A notable exception was the Japanese Yen which fell .7% to 79.52.

Earnings are expected from Carmax, ConAgra, and Rite Aid.